Gurugram-based R2Robotronics enables drone deployment at 50pc of the cost 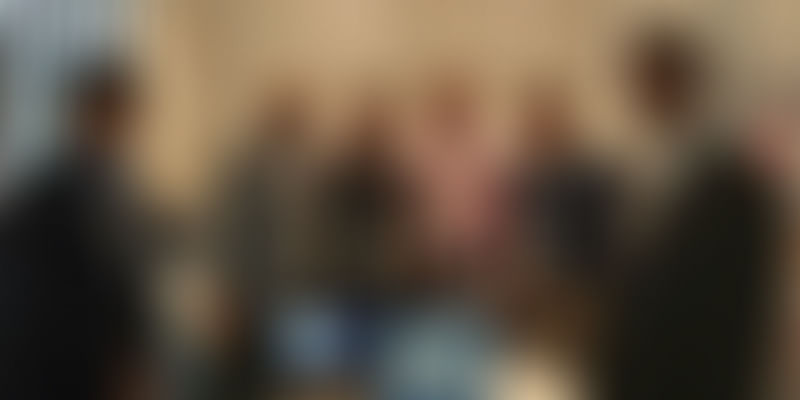 During his MBA at FMS Delhi, which he pursued after completing engineering in Computer Science from VIT University (Vellore), Aman Singh interned at an investment banking firm but realised it wasn’t to his taste. Instead, he was fascinated by drones and the technology and business challenges their makers face -- an interest going back to his engineering days.

For eight months Aman studied drones, trying to work out the development costs of the product, which he realised were huge. “When an app crashes, you can reboot your phone, but when a drone crashes, you’ve got to start afresh,” says Aman.

However, his determination and courage carried him forward and enabled him to take a step further and start R2Robotronics in Gurugram. The flagship product that has been built under the venture is DROSNAS or the “Drone Swarm Navigation System”, a cloud-powered enterprise drone swarm management platform. The launch of the product was carried out at ESRI India’s User Conference 2017 on January 19.

DROSNAS was built for the GIS (geographic information system) platform. Being hardware and software-independent, it is compatible with most of the drones in the market.

Customising the deployment of drones

DROSNAS enables the user to simply fly his drones around using DROSNAS’ interface and specify the points for data collection, after which the drones fly autonomously, collect data and relay it back to R2’s cloud network, where it is processed and the results are shared with the user.

Aman calls it the Android-to-drone, which enables one to use a drone with any sensor despot. The dual-AI system makes sure that even if the server loses touch with the drone for a second, the system will have no problem navigating its path.

This new step in drone-based GIS means the users can now deploy drones at less than 50 percent of the original cost, with a much greater efficiency and without having to worry about the software and data. Drone fleets can now go and scan an area in a much shorter time and help the user make intelligent decisions much more quickly,” says Aman (23), who has interned with with ZOHO Corp, Rolta India and Deutsche Bank (Investment Banking).

Drones use a computer or a SoC (system on a chip) to connect to the cloud, and R2Robotronics installs certain programmes on top of the system to ensure flight stability and management in the event of a loss of connection with the cloud. Once the drone is connected to the cloud, one can transmit and receive data from a drone with ease.

R2 has partnered with one of the biggest GIS solutions providers – ESRI. By leveraging the latest technology in image processing and 3D visualisation, the company is now able to provide an integrated solution for drone-based GIS needs.

Since it is a centrally monitored system, all the information about the drone fleet is available at one place. One can monitor the drones operating from anywhere in the world. This technology enables even regulatory bodies to maintain supervision over the flights that have been logged into the system. Aman stated that data can be shared while on the move with software for processing while making sure that the user doesn’t need to worry about the OEM’s compatibility with his system.

After almost spending 15 months in development, we have finally moved the product out of beta. The product has tie-ups with leading application software vendors, who help us keep the system lean, via APIs, while making sure the objectives for the user are achieved easily. We have spent almost $25,000 on R&D,” says Aman.

When R2Robotronics was struggling to raise funds, Gurugram-based Jaarvis Accelerator came to their rescue and funded their R&D with $40,000. Since everything on the electronics front was made out of India, getting the specialised UAV sensors and boards posed difficulties for the team.

For startups with R&D-based funding, the import duties can wreak havoc. We were spending more on duties than we would on our development team’s stipend,” says Aman.

The target market of DROSNAS is made up of the businesses that are looking to adopt automation in jobs that need extraordinary amounts of human effort in open area tasks, such as security surveillance, crop analysis, logistics and GIS.

R2Robotronics has been selected as one of the top eight startups from India to participate in the 100 Open Startups in Brazil. Their revenue model is based on a one-time setup fee, for integration of a drone with the system and attachment of any sensors, and a subscription fee, for subscription to the cloud for utilising the drone navigation service of the platform. Charges will also be levied for the addition of any new sensors, for integration and support.

R2Robotronics has a team of three people. It is actively looking for investment to expand and expedite the process of pilots and acquiring clients, both in India and abroad.

According to 6Wresearch, India UAV/Drone Market is anticipated to reach $421 million by 2021. Mini and micro drones are being increasingly deployed in both military and law enforcement applications. Factors like terrorist activities, border security, rising defence budget and FDI, favourable government policies on import, and increased domestic manufacturing campaign for defence aircraft and military equipment are driving the growth of this market. The report also revealed that after China and Japan, India is emerging as one of the key markets for drones in Asia-Pacific region.

The growth opportunity in the market has much appealed to the startup fraternity in the last two to three years. To name a few players who have capitalized on the same would be Drona Aviation, a SINE IIT Bombay incubated company (focuses on aerial cinematography); Chennai-based Atoms & Bytes (sells custom-made drones, drone kits, and accessories ); Bengaluru-based Edall Systems (provides industry-oriented training of UAVs for engineering students and builds and supplies UAV components to the Defense Research and Development Organisation and National Aerospace Labs); Mumbai-based startup Airpix (offers aerial photography and video production services for city planning and disaster management); and Netra by IdeaForge, founded by a group of IIT-Bombay graduates, an unmanned aerial vehicle that was used during the Uttarakhand floods rescue operations.