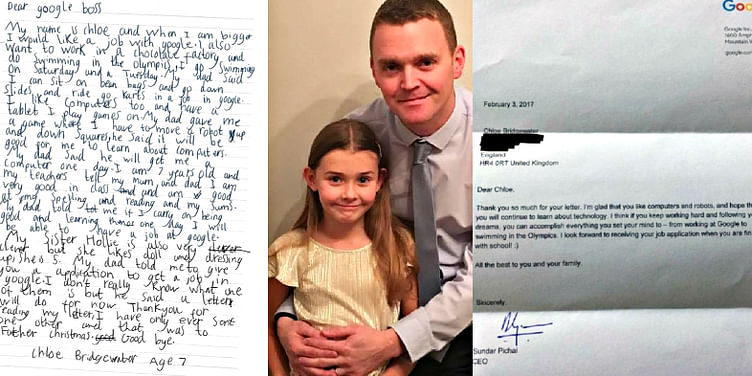 For all those who criticise the increasingly tech-centric lives of our younger generations, the story of what this seven-year-old technophile did is a real eye-opener! After Chloe Bridgewater, a second grader who lives in Hereford, UK, got her hands on the Kindle Fire tablet and a game with robots, she suddenly knew what she wanted out of life - a career in technology, and at the topmost internet company in the world, no less!

Chloe, completely oblivious to the fact that she was seven, decided to waste no time in letting the "Google Boss" know about her interest in working with them in the future. Taking her father's advice, she whipped up this "job application", detailing how much she loves computers and wants one someday, and how her tablet and the game her dad gave her, where she has to "move robots up and down squares", have gotten her very excited about technology. But what she is most thrilled about is getting to work in an office with bean bags and slides!

She warns the Google Boss, though, that she is also just as interested in swimming and working at a chocolate factory. She says that she doesn't really know what an application even is, but that her father said a 'letter' would suffice. That rang a bell for her, for she knew how to write one, having once written to"father christmas"!

Her father shared a picture of this letter on his LinkedIn profile, and everyone was quick to tell him how adorable it was. But little did he know that the Google Boss himself, Google CEO Sundar Pichai, would also take the time out to laud his little one.

Under the formal Google letterhead, Pichai writes his reply, "I'm glad you like computers and robots, and hope that you will continue learning about technology" and says that "he look(s) forward to receiving (her) job application when (she is) finished with school," besides wishing her luck to achieve all her goals.