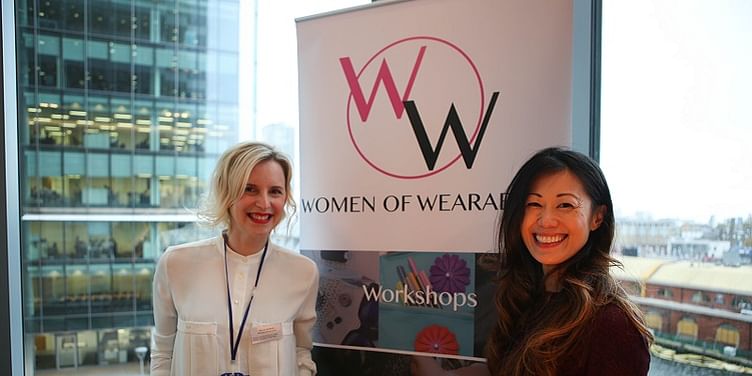 With the voices to bring more diversity and women in technology growing louder, these two ex-lawyers have started Women of Wearables, the UK and Europe’s first community/organisation for women in the wearable tech, fashion tech, and IoT space

Salone Seghal, Co-founder and CEO, TrulySocial, wonders where the real inspiration for women to join technology and become founders lies. The problem, she says, is deep-seated and requires an attitudinal shift in society — people need to get used to seeing empowered and financially independent women in their own households who can then make a mark on the outside world.

With Women of Wearables (WoW), the UK and Europe’s first community aiming to inspire, support, and connect women in the wearable tech, fashion tech, IoT, and VR/AR industries, ex-lawyers Marija Butkovic and Michelle Hua decided to take a step towards that change.

Michelle is the founder of Made with Glove, a wearable tech startup designing fashionable heated gloves for women. Marija is the co-founder of Kisha Smart Umbrella — also a wearable tech startup — responsible for creating the world's smartest fashion tech umbrella. Having had three years of experience in the industry, they decided to address one of its problems — the lack of women and diverse teams — leading to the birth of WoW.

WoW aims to encourage more women and diverse teams to participate in building hardware and software products as designers, product managers, and developers. WoW would also like to see more women in science, technology, engineering, and mathematics (STEM) fields and founding their own companies.

Marija, who has worked across a range of projects in different industry sectors including legal, journalism, IoT, wearable tech, and fashion, says,

“We decided to start WoW and empower and support women who already are in this industry, but also those who still struggle with where to start. WoW has a growing community of female founders, product and UX designers, developers, smart textile designers, executives, and managers, all working in wearable tech, fashion tech, IoT and VR/AR industries, not only in the UK and Europe but also worldwide.”

The community supports women and girls in the technology industry through monthly events and mentorship in Manchester and London. WoW also organises workshops on wearable and e-textiles projects for girls between the ages of 10 and 18.

By arming young girls with the required skills and information, Marija says they are looking to reduce the gender gap in the wearables industry. WoW also shows them how intangible skills such as coding can be converted into tangible products.

“We went from a small group of three ladies to a community of over 300 worldwide in a matter of months just from word of mouth, and since setting up a website and hosting events it has continued to grow,” says Marija.

The wearable tech industry has a dearth of female role models, and it is difficult for women to become what they can’t see. WoW tries to give these amazing women visibility and recognition.

However, wearables being a new industry can make support and mentorship hard to find. It is also challenging for female founders operating in this space to be supported if they aren’t based in a major city with physical access to support networks.

Marija mentions that they are trying to solve this problem by building an online community of women (and men) and connect them even if they are in different parts of the world.

Michelle and Marija were introduced through Ada’s List (a group for women in tech in London, but also worldwide) in 2015. Despite not having met, they forged a connection and Michelle wrote a blog about Marija’s startup Kisha. They finally met at the Wearable Tech Show in 2016. Marija says, “And we were inseparable for two days, brainstorming and sharing our experiences in the wearable tech world. That’s how WoW was born.”

The duo was soon joined by Rachael Yeung, a STEM ambassador, as a wearable tech assistant. Rachael had started as an intern with Michelle at Made with Glove and is now delivering WoW’s wearable tech workshops.

WoW began with no funding and coverage and grew only through word of mouth. Their first event, ‘How She Did It’, was in London in October 2016 and their first workshop was in Manchester that fall.

“Our wearable tech workshops aim to bring together the local community to get parents and kids learning new skills and introduce them to the wearable tech industry, so they can walk away with something tangible.”

The team has recently raised funding for their wearable tech. The community works through supporting one another by promoting each other through blogs and interviews and having local meetups and sponsored events.

Increasing focus on Women in Tech

They also engage with the local community (especially schools and universities) with wearable tech workshops for kids and adults, aiming specifically at teaching girls that coding is not just about sitting in front of a computer. It teaches them skills such as sewing and making things that they can wear and decorate.

Today, the need for diversity and a greater push towards women in technology has given birth to several communities across the globe, some of which include Girls Who Code, Black Girls Code, Anita Borg Institute, Girls in Tech, and Girl Develop It.

“One very important thing to mention is that we are the UK and Europe’s first community/organisation for women in the wearable tech, fashion tech, and IoT space. There are many different women in tech groups, but after very thorough research we found out that there aren’t any groups that target women in these industries specifically.”

WoW is funded by grants and corporate sponsorship for their events and wearable tech workshops. The community provides women in wearables to create opportunities and connect with each other to ensure the success not only of their ideas but the whole industry.

For the coming year, the team has planned the Wearable Technology Show in March where they are exhibiting and speaking, as well as the Women in Tech Festival in Mountain View, USA, the wearable tech workshops in Manchester in February and April and high-profile VR events like the VR World Congress in April and VR & AR World Conference in June.

“Our main goal is to create the world’s biggest community of women in the wearable tech space — not only female founders but also product designers, UX designers, female app developers, and smart textile designers. This community will not only become an amazing talent pool but will serve as a source of inspiration for all those women who would want to pursue their career in the tech industry or maybe switch from some other industry.”