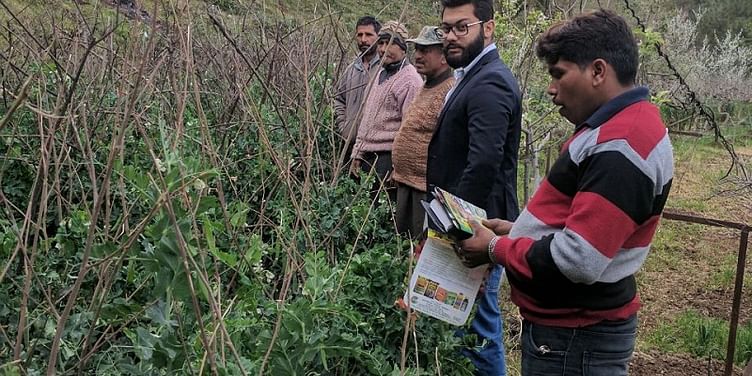 After three years of hard work and convincing 1,500 farmers to go organic, Arjun Suri, sees light in his search for a new green revolution.

Twenty-five-year-old Arjun Suri was heir to a large family-owned enterprise called Suri Enterprises. The agro arm of the closely held business had a turnover of Rs 2 crore, and a clientele of over 2,000 farmers. For over 30 years, his family supplied chemical fertilisers and hybrid seeds to farmers and built a sizeable business in the small hillside town of Solan in Himachal Pradesh. The family also has business interests in the distribution of pharmaceutical products as well as a stake in real estate in the region.

After finishing college in Delhi in 2013, he decided to spend time with farmers in the region. That's when it dawned upon him that the pristine green belt that Solan was known for was being destroyed by tonnes of chemical fertilisers and pesticides. "I realised that while farmers were increasing the yield of the land they were underestimating the impact of chemicals on the land and soil," says Arjun.

Arjun discussed this situation with his father and expressed his desire to help farmers switch to organic farming by changing the way they did business. Initially, his father did not take him seriously thinking he was young and naïve, but later agreed to go with Arjun. "He said I could change the way we did business provided I started slowly and built a narrative for farmers, communicating to them that they need to change from chemicals to organic fertiliser," says Arjun.

But first, he had to change himself and his company before he built that narrative. Solan is known for horticulture and is popular for its tomatoes. The problem was that even the farmers did not know what organic farming was.

A good story often has a villain in the background, and in this case, it is the fertiliser and chemicals industry. Arjun, however, laughs at the thought of them being called villains. He instead says that he had to streamline his business process and prepare his team because revenues would fall. "I decided that, every year, I would reduce the percentage of chemicals that I sourced. The rest would be bio-fertilisers, with which I can then work with a set of farmers to create an ecosystem in the district," he says. Over the last three years, the company has reduced the chemical intake by 50 percent in several farms.

Arjun adds that he had a lot of convincing to do with farmers. The chemical companies remained happy because the larger farmers continued to buy chemical fertilisers. But behind the scenes, Arjun had aggregated 1,500 farmers to work on bio-fertilisers and organic items. It took three years to prepare these farmers to go organic. Each of them gave him a small portion of their land to experiment with bio-fertilisers. Arjun convinced these farmers that in three years, an organic farm would yield as much as one that was sprayed with a chemical called calcium nitrate. "I proved this argument, and they agree that bio-fertilisers are better for the environment. But unfortunately, they are happy to go back to chemicals because they believe that an organic farm is expensive, which it is not," says Arjun.

This, he believes, is a problem, because the chemical lobby has the farmers indebted to them. Also, they are able to manage prices. Moreover farmers get a subsidy on chemical fertilisers. Chemical fertilisers such as calcium nitrate cost Rs 2,800 per kg, and are twice more expensive than bacterial and fungal farming. A comparison of costs of bio-farming and chemical farming by YourStory shows that is cheaper for the agro industry to go organic (see charts 1 and 2).

A major deterrent to organic farming is that it takes three years to prepare a farm for the switch, which may put off many a farmer since means that it is a dead investment.

"Corporates can push organic farming. It is the only way one can change the farm-to-fork connect. There is a need for transparency and a lower chemical footprint in our agriculture," says Harminder Sahni, founder of Wazir Advisors, a consulting firm.

With all the hard work, Arjun has increased the revenues of his company to Rs 6 crore. He is currently trying to build green houses in Solan so that farmers can readily grow crops with bio-fertilisers. But he says that it is a long-term game, and wants to do this for a generation to come. "Maybe in a decade, I will make a change," says Arjun.

India irrigates 215 million acres of land, and 98 percent of that is on chemicals. There are studies that tell you that the impact on soil could be irreparable. Even data put out by the Ministry of Fertilisers recommends that chemicals be used judiciously.

The note on the ministry’s website adds, "There is no scientific evidence of declining soil/crop productivity from judicious use of chemical fertilisers. However, indiscriminate and imbalanced use of fertilisers coupled with low addition of organic matter over the years may result in nutrient deficiencies. There is also the possibility of contamination of ground water due to excessive use of nitrogenous fertilisers, particularly in light textured soils, that has consequence on human health if used for drinking purposes."

"Agriculture needs a change, because it is evident that most of the crops contain high levels of chemicals in them. Citizens do not realise how harmful current agricultural practices are," says Devangshu Dutta, founder of consulting firm Third Eyesight.

India consumes 500 lakh tonnes of chemical fertiliser and 320 lakh tonnes of indigenous fertiliser every year. But the organic route is still a faraway dream in India. It can only begin when the chemical distribution lobby is broken and people like Arjun Suri get all the support they need for going green.

"The truth is out there. Even we ourselves have not reduced chemical distribution. It depends on the farmers to make the move, but the 1,500-odd farmers are my case study to take to the whole country that chemical-free farming is possible," says Suri.

India has companies like Crofarm, Big Basket, and VDroneAgro trying to change farming in the country. But only time will tell whether we are on the path to genuine change in Indian agriculture, which has not witnessed a real revolution in centuries.