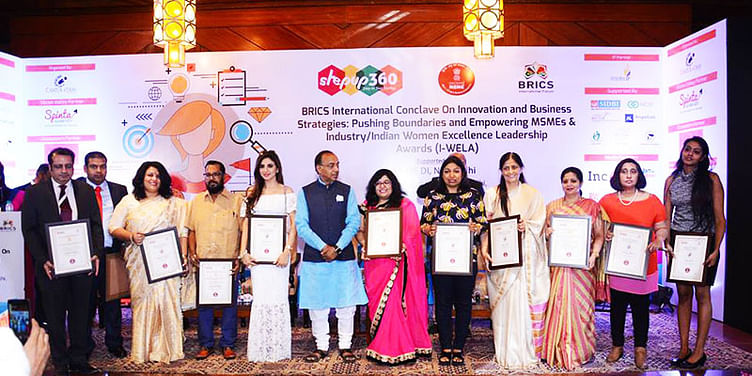 The micro, small, and medium enterprises (MSME) sector constitutes a major chunk of the Indian economy. Employing 80 million people year on year, it contributes to eight percent of the GDP.

This backbone of the Indian economy can sustain and support the youth and women, especially the latter. More financially empowered women impact the economy, improve the GDP, and help to better their homes and society.

Women’s entrepreneurship can make a particularly strong contribution to the economic well-being of the family and communities, poverty reduction, and women’s empowerment, thus contributing to the Sustainable Development Goals (SDGs). Hence, governments across the world, as well as various developmental organisations, are actively undertaking promotion of women entrepreneurs through various schemes, incentives, and promotional measures,

shared the Minister of MSME, Haribhai Parthibhai Chaudhary at the BRICS International Conclave on Innovation and Business Strategies: Pushing Boundaries and Empowering MSMEs held on 25th March in New Delhi.

The event was about empowering women, encouraging women entrepreneurship, and establishing a sound foundation which will help breed more women entrepreneurs. Although the Indian government has been making some strides in this regard, challenges persist.

Schemes by the government

In December 2016, Prime Minister Narendra Modi announced a few schemes and programmes to facilitate and generate employment in the MSME sector and help motivate and strengthen not just women entrepreneurship but also the small and micro industries in India.

Credit limit enhancement: Under the credit guarantee scheme for small businesses (CGTMSE), the credit was increased from Rs 1 crore to Rs 2 crore with the inclusion of NBFCs in the same.

Enhancement of cash credit limit: This has been increased from 20 percent to 25 percent of the turnover.

Challenges women entrepreneurs have to overcome

Aparna Saraogi of WEE, an initiative to strengthen the women’s ecosystem, says, “Organisations headed by women have shown higher financial returns, less NPA, and faster access to market. More than 70 percent of consumer behaviour is decided by women, India has a good representation of women in MSME enterprises, but women still constitute only 17 percent of India’s GDP because of their absence in the workforce. Only around 20 percent startups across the globe are founded by women.”

Talking about the impediments the women’s entrepreneurial ecosystem in India faces, Shweta Singh, Co-Founder of StepUp360, the organisers of the conclave, said,

From getting incubated to commercialising their product, women entrepreneurs tend to face a lot of challenges. We strongly believe in empowering such women by improving their problem-solving capabilities and tools to encourage their incremental creativity and innovation.

Devesh Chawla, Founder and CEO, Chatur Ideas, said, “Women are not only the backbone of the family but the entire nation. Knowing this, how can any startup ecosystem flourish without women being an integral part of it? The most inherent problem that women entrepreneurs face is finding finance to start and grow.”

What needs to give?

One of the primary things that need to change for women is the mindset, a transformation both men and women need to undergo. “Mindsets need to change,” said Sanjana Jon, the New York-based fashion designer. Women have been conditioned to think of themselves as being the primary caregivers and nurturers. It is a tag that women have adopted as their own. Sanjana urged women to look beyond the traditional roles of being a good wife and mother and embracing economic empowerment.

Education is essential, for it leads to economic empowerment. Women, especially in rural areas and small cities and towns, don’t have access to education. Often girls are not encouraged to take up STEM and are pushed to take up other subjects. There is no dearth of entrepreneurial spirit but the lack of education, exposure, finance, and opportunities hold women back. “With higher education, women experience an increase in self-confidence and become more capable of recognising their strengths,” said R K Panigrahi, Director, MSME Development Institute.

While the schemes and programmes undertaken by the ministry provide and facilitate technology support and upgradations, infrastructural facilities, skill training, and other such benefits, there is a strong need for education. Education will not only help build women’s confidence to take up the challenges of entrepreneurship but also help them to grow in their career path.

The other challenge the government needs to address is to stop putting women in the SC/ST category. Not only does it divide the resources but inevitably puts women in a bracket that is considered backward and lowly. Gender parity will help engulf this divide.

Meanwhile, women need to support and stand up for each other and stop thinking for themselves as lesser than anyone. They need to push the boundaries to tread on less travelled roads and break the stereotypes that hold them back.