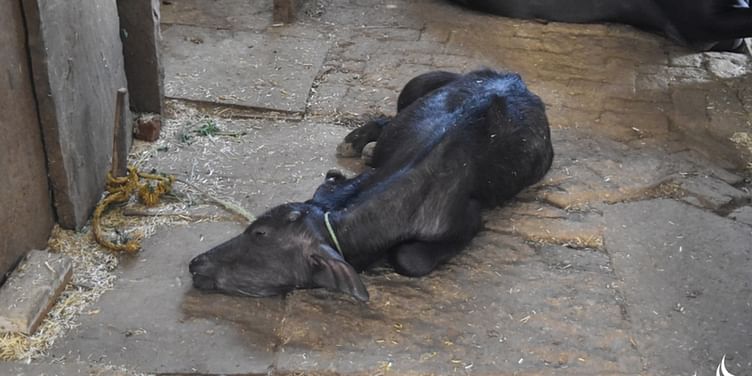 There are no happy cows gladly providing their milk for humans to consume, as we are made to believe.

Animal cruelty, bloodshed, and slaughter are often associated with non-vegetarianism, meat consumption, and the leather industry. Rarely have voices been raised against the thriving Indian dairy industry where the cattle are not only exploited but also forced to live in inhumane conditions not fit for any living being.

Studying such institutionalised cruelty, the Federation of Indian Animal Protection Organisations (FIAPO) conducted an undercover investigation in 49 dairies across four cities Alwar, Bikaner, Jaipur, and Jodhpur — in Rajasthan in June 2016. The findings uncovered the cruelty and the pitiable living conditions the cattle are subjected to.

Don't get milked! The white lies of the dairy industry

It is common knowledge that cattle, like human mothers, lactate for their young child. In the case of mass production of milk in dairy farms and tabelas, frequent pregnancy of cows is encouraged and often, animals are subjected to artificial insemination.

“There is constant abuse of animals that the milk industry promotes at every step. There are no happy cows gladly providing their milk for humans to consume, as we are made to believe,” says Varda Mehrotra, the 33-year-old FIAPO director.

Animals are made to calve at least once a year for the milk to be produced, which means the cattle are continually artificially impregnated. Studies show that due to the artificial inseminations and the way they are treated, the animals’ life spans are drastically impacted. In an ideal situation, cattle grow to be around 25 years of age, but milk animals have a life span of around 10 years.

While this information has often made news and is, to a certain extent, expected from the dairy industry, the FIAPO investigation revealed that there is much more these mute beings are put through.

A male calf is often deemed a burden by the dairy industry as the young animal is unable to produce milk. The only income an individual can gain from the young calf is by selling its meat and skin for leather. In short, slaughter is the only option available for a male child. According to veterinary experts, a calf should be at least four to five months old before he meets his fate. Sadly, the dairy industry fails to provide even this limited life span to the young animals. Many farms often send the little animal to the slaughter house earlier, within four to five days of its birth, thereby violating the Prevention of Cruelty to Animals (Slaughter House) Rules, 2001.

“Dairy is cruel and the reality of the dairy industry which we often do not get to see is that there is brutality and abuse, leading to the slaughter of animals once they are termed ‘useless’ and incapable of milk production,” says Varda.

Once born, the calves are separated or restricted from accessing their mothers, which is traumatic for both mother and calf. While the mother’s milk is used for human consumption, the calves are fed substitutes and allowed limited suckling. Male calves and unproductive, sterile females are deemed unusable and are either abandoned or sent for slaughter. Females that are healthy are kept alive and go through the entire milking-to-slaughter cycle again. Once every ounce of milk is extracted, the infertile and ‘spent’ cows and buffaloes are killed.

In a chilling revelation, the investigation further revealed that in order to continue the milking process and keep the mother lactating, a khalbaccha — a makeshift calf — is placed next to her. In certain farms, the tail and the head of the young calf is dismantled from the carcass and is placed at the ends of the stick. The smell of death is camouflaged with hay and a balm; hence, the cow continues to get milked, while the remains of the young calf are sold in the market as veal.

The missing element in the beef debate

It is ironic how cattle are viewed through different lenses when it comes to milk and beef, even though they are two sides of the same coin. According to an article published in The Hindu by Krithika Srinivasan, Rajesh Kasturirangan and Smitha Rao, the monetary value of milk production almost tripled between 2004–05 and 2011–12 and that there was a 98.6 percent match between milk and beef production over this period. It is neither shocking nor coincidental, that India, the largest producer of beef in the world, is also the largest producer of milk, Varda adds.

According to the data released by the US Department of Agriculture, India exported 2.4 million tons of beef and veal in 2015. While there have been major questions and discussions about what is fuelling this number, no one is ready to look at the root cause — the growth of the dairy industry in the country.

The myth of “healthy” dairy products

Through the medium of advertising and word of mouth, individuals are fed this information about milk and milk products being absolutely healthy and great for us. No one ever talks about the other side of the story, which is the health risks they carry.

“I am a mountaineer by passion and a vegan by compassion and I want people to question their consumption and the choices they make,” says Kuntal Joisher, world’s first vegan to climb Mount Everest.

The 34-year-old believes that if he can climb the highest peak in the world on a plant- based diet, anyone can live a healthy life without consuming animal products. By following a plant- based diet, one can drastically cut their carbon footprint, save precious water supplies, and help ensure that vital crop resources are fed to people, rather than livestock, he adds.

One of the strongest beliefs inculcated by the Indian society is that dairy products are healthy and synonymous with good health. The FIAPO calls this a “white lie” and questions the need for dairy products in a human diet.

Elaborating further, Vardha says, “If you tell anyone that drinking milk actually causes as much suffering as eating meat, they will not believe you. So the whole idea of ‘Don’t Get Milked’ is to bring forth the reality of the dairy industry and enable consumers to make a more informed decision.”