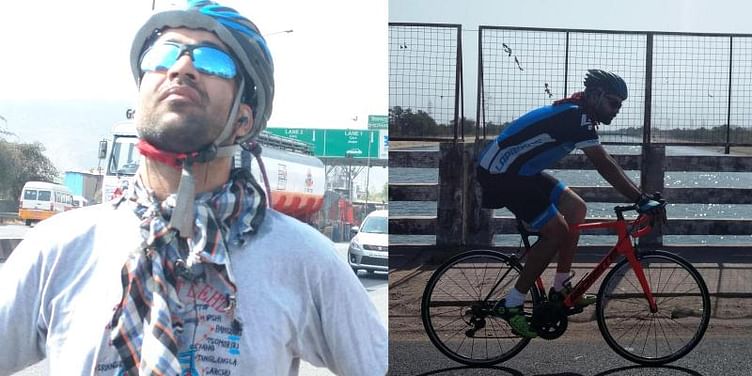 Devanshu completed cycling along the Golden Quadrilateral Highway, attempting to cover the Quadrilateral in the shortest duration possible.

What began as an attempt to stay fit and healthy, has now brought him close to finding his name in the Guinness Book of World Records.

A couple of years ago, Devanshu took up cycling as a regular activity as he felt it was the best means to maintain a fitness routine.

“I picked up cycling at the time when my father was diagnosed with kidney problems. It then hit me that I need to maintain a fitness regimen for health problems could affect me too. Initially, I used to cycle about 10–15 kilometres a day, which gradually increased to 35 kilometres a day,” says 27-year-old Devanshu.

Training for the event

To turn his evening routine into an attempt to break the world record as a tribute to his father, Devanshu put himself through some rigorous training and fitness regimen.

Devanshu often cycled from Delhi to Panipat and back, which is about 80 kilometres from Delhi, covering at least 150 kilometres in a single day, during the final three weeks of training.

Apart from cycling, he maintained a strict diet, practised yoga, hit the gym, and took physiotherapy to help body maintenance and repair.

“I trained under Subodh Mor, who was PV Sindhu’s physiotherapist at the Olympics 2015. I was fortunate enough to have such dedicate guidance and professional help to maintain fitness,” says Devanshu, who is currently pursuing Post Graduate Programme (PGP) at the Indian School of Business, Hyderabad.

On March 5, 2017, Devanshu set on this incredible journey, along with his crew members: Divam Anand; a driver, Sanjay, and a masseuse, Munna.

“I didn’t have a track record of such athletic activities, and being an amateur in the field, so getting sponsorship was a little difficult. Also, I didn’t have time to have a flag-off event or time to market the event, since I wasn’t really sure if I could complete the journey ahead of me,” says Devanshu.

Devanshu was sponsored the Lapierre SL 500, a model that was used by the French cycling team, FDJ, in the Tour de France, an annual multiple stage bicycle race.

“The first day was arguably the most enjoyable day of the journey. Since the terrain was flat from Delhi to Jaipur, I managed to cover a distance of 275 kilometres within 12.5 hours,” says Devanshu.

For the first three days, the team stayed in hotels, but as the days passed, Devanshu began to enter the hilly terrain of the Western Ghats in Maharashtra, where he had to tackle elevation and resort to riding even at night. He ended up napping and taking breaks in the most unimaginable places.

“I would sleep on the roadside, footpaths, any place dry, and didn’t have snakes,” he says.

There were days when he would have at least three punctures in a day, or the weather would get too hot or humid along the way. And on days when everything seemed fine, his shoes would tear and he would be forced to ride wearing flip-flops. Even amidst such inevitable conditions, Devanshu would cover an average of 300 kilometres a day.

“The last leg of the journey was incredibly though, I could barely catch about three to four hours of sleep a day. And there were times when I would wonder if I could even complete this journey, especially towards the end when I was mentally and physically exhausted and even the equipment was falling apart,” he says.

During the journey, Devanshu was helped by strangers merely because they appreciated what he was doing, and shares one such incident that he says completely overwhelmed him. “During the way, I was helped by one gentleman in Karnataka, who did not speak either English or Hindi. We were desperately looking for ice, and he decided to help us just by the look and feel of us. He decided to park his bike along the way and guided as to where we could find some ice. That was one touching moment,” says Devanshu.

Devanshu is now completing the formalities for his entry in the Guinness Book of World Records. Devanshu had contacted the record keepers before starting his attempt and says that he’s the first person to complete the ride within the stipulated time of 20 days set by Guinness arbitrators. The previous record was set in 2015 by New Zealand's Tim Chittock who completed the journey in 24 days.