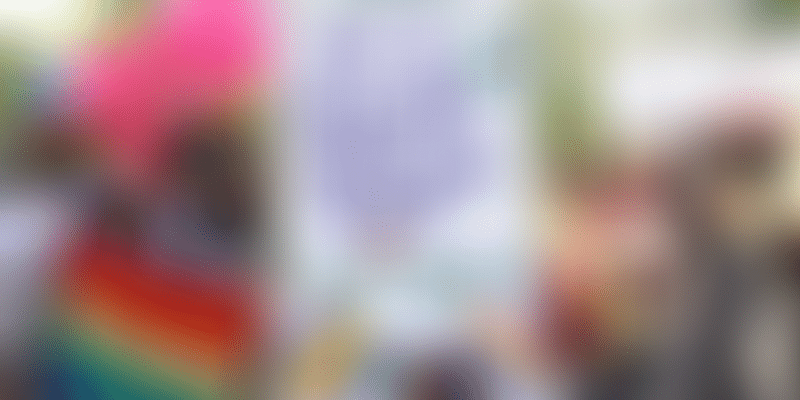 By hosting its first Queer Pride Parade on Sunday, Lucknow has joined hands with other cities in displaying solidarity for the LGBIT (Lesbian, Gay, Bisexual, Intersex, and Transgender) community. People walked from the Sikandarbagh crossing to the General Post Office Hazratganj, a distance of 1.5km. The message about the march undoubtedly went a long way, with people from as far as Mumbai, Chandigarh, and Jaipur joining in and extending support.

One of the participants, Venkatesh, who had come from Kolkata, told the Times of India,

"It is surprising to see Lucknow come out in such large numbers, outdoing pride walks of Jaipur and Nagpur. Even though it is a long time after India's first Pide walk happened in Kolkata in 1999, we are glad it is at least happening,"

300 people marched hand in hand, each holding either a rainbow flag or dressed in rainbow colours. This march in Lucknow has come 18 years after India held its first Queer Pride Parade, which was in Kolkata. According to Darvesh Singh Yadvendra, the organiser of the event, the march had two objectives — to protest against the harassment and discrimination that the LGBIT community has to face and to celebrate the diversity of sexuality and gender.

Participants danced their way through the march chanting slogans like “I am Gay, It’s OK”, “Hey Hey Ho Ho Homophobia Has to Go” according to Scroll. For a city that is perceived to be conservative, this was a huge step towards initiating a debate on the LGBIT community's problems and the stigma surrounding them. According to Darvesh,

“This was a full-fledged Queer Pride Parade... Here, for the first time it was held and not only LGBIT but their family members turned out in support. It shows that they are also getting acceptability.”