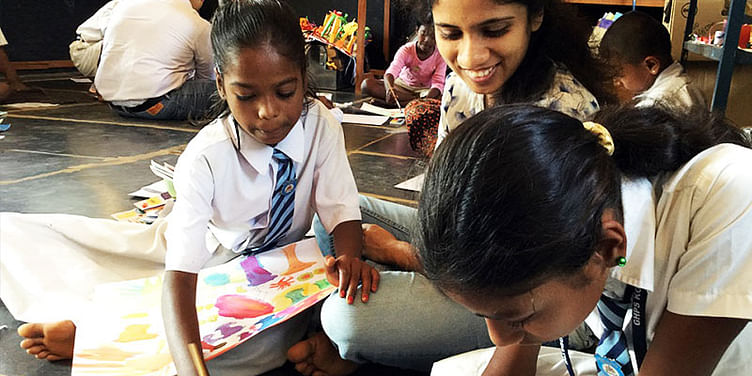 Rote learning or learning by heart is an accepted reality of the Indian education system. Parents and teachers are aware of the fact that the existing education system quells the creativity of the child and transforms studies into a chore, to be pursued for the sole aim of scoring marks and not for the pure joy of learning. But they too, like the children, are trapped within the system and are unable to break away from the age-old style of how things were done.

Bengaluru-based ArtSparks Foundation is an educational non-profit that is working towards shaping the creative, cognitive, social, and emotional development of children through the medium of visual arts. ArtSparks Foundation also trains teachers, encouraging them to reflect on their teaching practice, and explore new ways to enrich their students’ learning experience. Carefully designed visual arts-based activities, materials, and resources form the core of their module.

Nisha Nair founded ArtSparks Foundation in 2014, after having spent two decades in the US, first working in design and later in arts-based education for disadvantaged children.

After moving to the US for her undergraduate course in graphic design in 1994, Nisha joined a marketing and communication firm as a designer. One of their clients was the world-renowned Smithsonian museum (the one in the Ben Stiller movie ‘Night at the museum’!). While working on the branding of the museum, Nisha was invited to be a part of a six-week workshop that used art to help children with serious issues. She saw children from poor families, primarily from the African-American community, who had struggled to perform well in academics blossoming and coming into their own using arts-based tools.

Nisha realised the potential such tools have for children with developmental disabilities like autism and developed a strong desire to use art to make an impact. Soon, she was volunteering on weekends. In 2005, she quit her plum corporate job and embarked on a new career path by joining a master’s course in arts education, at the age of 32.

Nisha then worked with over 70 schools in New York and was able to help thousands of children. However, her ultimate dream was to start an organisation in India.

Though she had worked with street children in India during sabbaticals, it was in 2014 that she made the trans-continental shift to Bengaluru.

Having spent her childhood in Bengaluru, Nisha was determined to usher a change in the education system in the city. Nisha says, “When I was in school, I saw that teaching was textbook driven, with no deeper engagement with the content. So, as a product of the Indian education system, I was familiar with the country’s schooling methods.”

We are not an art institute. People are quick to assume we conduct arts and crafts classes. We use arts to nurture creative thinking in children. We want them to recognise that a single problem can have multiple solutions. We also encourage children to think independently as well as work as part of a team.

Getting young ones ready for the 21st century

ArtSparks Foundation has worked with over 630 students and 165 teachers in the 2016-17 school year. It has three ways of partnering with schools:

Model School Initiative – the team goes to schools they partner with and conduct workshops for teachers as well as students. Adarsha Vidya Samsthe in Kolar District, Kodathi Govt. School in Kodathi village, TVS Academy in Hosur, Sri Sathyanarayana School in Madiwala are some of the schools that Nisha and her team have worked with.

Partnership Programme – they partner with like-minded organisations that work with children and teachers which help in an exponential increase in the impact.

Nisha explains her organisation’s vision, “To be successful in the workplace of the information age, one needs to be able to think critically about issues, solve problems creatively, and communicate effectively. In an age where change is the only constant, understanding and applying 21st century learning skills allows young people to be adaptive and innovative in responding to new demands and changing circumstances.”

Emotional intelligence and the future generations

As new research is proving the importance of emotional intelligence over IQ, it is commendable that organisations like ArtSparks Foundation are focusing on the social and emotional well-being of the youth. In an era where depression and even suicides are becoming more and more common among adolescents, managing impulsive behaviour and emotions, and promoting empathy, perseverance, and collaboration becomes important than never before.

Nisha shares her experience with students at a rural school, who were asked to imagine themselves 20 years from now as change-makers in their communities. The confidence and change in the body language and approach of the children were palpable. From wanting to be police officers to political leaders, there is potential in each child waiting to be tapped. When the ArtSparks team goes back to a class in the second or third consecutive year, they find there are jumps in academic achievements and the entire batch is found to be more empowered, confident, and more prepared for life.