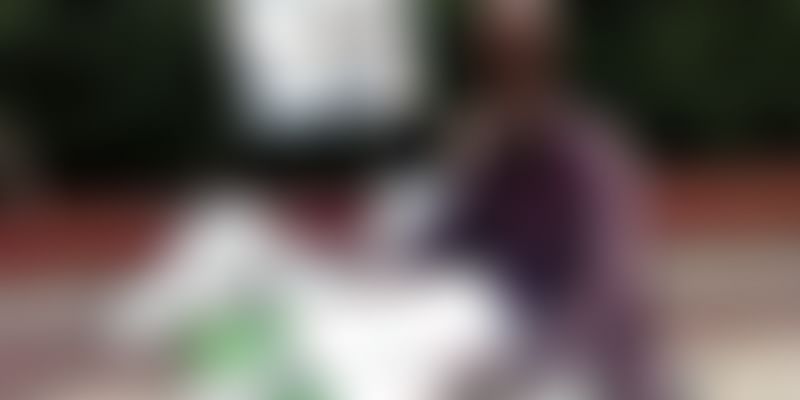 Rajendra Khale is an ordinary man with an extraordinary talent. People gather around him with curiosity as he effortlessly sketches with color pencils on a white drawing sheet. Rajendra has been living on the streets for the past thirty years. He is homeless, but he has found peace and dignity in the way he has chosen to live his life.

In his childhood days, Rajendra had an inclination towards painting and drawing. At school, he would pick up a pen and start drawing on a sheet of paper whenever he had an opportunity. However, due to his financial condition, he had to forget his passion and work at several odd jobs. He worked as a waste-picker, waiter, and also as a daily wage labourer to earn enough to feed himself.

His passion soon got lost somewhere amidst the daily chaos until an accident brought his life to a stand-still. According to DNA India, Rajendra says,

I lost my right leg a few years back after which I did a few jobs but then ended up asking for money from people for food. This was something which I did not approve of, so I started making sketches for people.

According to The Times of India, Rajendra says,

When people started noticing my sketches, I asked them to give me work. I wanted self-respect; I wanted to earn and survive with dignity.

While speaking about his work, Rajendra told DNA India,

I charge anywhere between Rs 100 to Rs 150 for a sketch and make two or three sketches in a day. There are days when people flock around me to see my work and appreciate it. That feels much better than begging for money.

Born and brought up in Pune, he has been living on the streets for as long as he can remember. He does not have a family and sketching is the only thing that brings him immense happiness. By choosing to work rather than beg on the streets, Rajendra is truly an inspirational man.