Meet Sonal Kaushal, the voice of Doraemon in India for the past 12 years 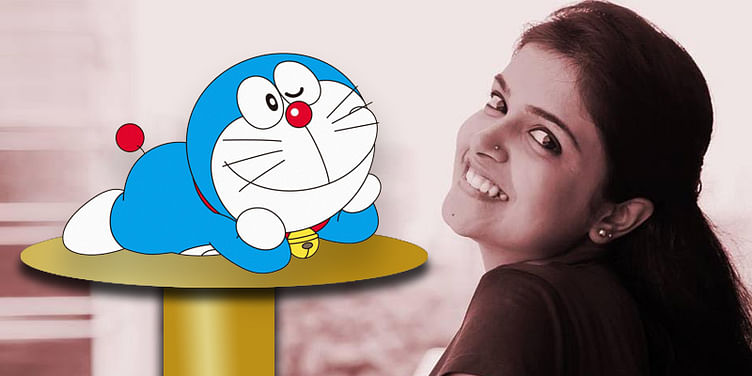 Whether you have children of your own, or have spent quality time with a niece or nephew, chances are you are quite familiar with Doraemon.

I have had the privilege of speaking to a bunch of interesting people who have accomplished impressive things in different fields in the course of my job. However, my conversation with Sonal Kaushal was very special since I have been hearing her voice in my living room on a daily basis for over seven years now.

Sonal does the Hindi voice over for the 22nd century cat robot called Doraemon, a popular Japanese animated series for children that has become a huge hit in India as well. Having spent hundreds of evenings watching the show initially with my daughter and later with my son as well, the characters now seem like a part of my family.

Twenty-five-year-old Sonal has been voicing Doraemon since 2005, when she was just 13. It was happenstance that took her to the audition for the show. Sonal had already anchored a children’s show on Doordarshan and was familiar with voicing work. Since Sonal’s mother was a casual announcer for All India Radio in New Delhi, she came to know that UTV was conducting auditions for a Japanese show that would be dubbed in Hindi. The brief she was given was that she had to sound like a robot.

I did not realise that Doraemon would become so big. I was chosen for the role, and for me it was like a picnic. My mother would get me chocolates and chips and I would have fun recording my lines in the studio.

Today Doraemon is the highest-rated kids’ show with 478.5 million viewers and currently airs on Hungama and Disney channels.

However, dubbing for an animated series is not easy, especially for a child. When Sonal dubs her lines, she has a screen playing the episode in front of her, a script with her lines, and the original voice-over in Japanese playing on her headphones. She has to speak out her lines in such a way that they match the original in tone while also being a close match to the lip movements on screen!

Brought up in New Delhi, Sonal decided to move to Mumbai in 2013 since the entire entertainment industry is based there. In fact, UTV Disney was one of the few channels that was based out of New Delhi. The channel auditioned several times for the voice of Doraemon but was not able to get a suitable replacement. So, it was decided that Sonal would record her lines from Mumbai and send it to Delhi and that’s what she has been doing for the past four years.

In 2014, Sonal was chosen as the voice of another iconic kiddie favourite—Green Gold Animation’s Chhota Bheem. Vatsal Dubey was the original artist, followed by Parigna Shah, who had to go off on maternity break. For Doraemon, Sonal had the freedom to create her own style since she was the first voice of the role. For Chhota Bheem, the challenge was to match the previous voice artist, which she was able to do justice to.

Sonal has dubbed for Amy Jackson in the movie Freaky Ali, and has also done the narration for several advertisements and shows on NDTV Good Times, Fox Traveller, and National Geographic.

Mandy in The Grim Adventures of Billy and Mandy, Mighty Raju (English), Darby in My Friends Tigger and Pooh and Arya Stark in Game of Thrones are just a few of the characters in her kitty.

Hours alone in a dark studio

Sonal believes anyone who has an interest in mimicry can become a voice artist. However, it will take time to modulate the voice and get the nuances of tone and expression correct. It becomes easier with experience and now Sonal finds it second nature to get into the skin of a character.

There are challenges to the job as well. In 2015, Sonal had taken up a challenging character on Cartoon Network’s Johnny Bravo, where she had to do a lot of screaming and as a result her vocal cords got swollen. Her doctor asked her to rest her voice for 10 days and avoid even humming. Sonal recalls,

I told my doctor that my recordings were already planned for a month. He then explained that if I didn’t take care I could even lose my voice.

Recording is also a lonely job. Spending hours on end in the studio can be difficult initially. Actor Hrithik Roshan had played the role of a blind voice artist in the movie Kaabil. He invited Sonal and a few other voice artists over to his residence in Juhu after the movie was made. He explained to them how it was only during the course of that role that he realised how difficult it is to maintain the energy and consistency in one’s voice, irrespective of what your personal mood might be.

Sonal herself faced a difficult moment when she received the news of the death of a friend in the Pune bomb blasts when she was in the studio and had to record a laughing scene immediately after that. Of course, the team makes a big difference and a good casting director and supportive sound engineers can be a huge help for the voice artists.

The things that money cannot buy

Nowadays thanks to social media, voice and dubbing artists, who used to remain faceless during earlier generations, are finally being recognised. Wherever Sonal goes, she has parents requesting her to speak to their children in Doraemon’s voice.

I had my own moment of maternal happiness when towards the end of our chat, I requested Sonal to speak to my son. She had said yes even before I could finish my request, saying the joyful, excited reaction of children when they speak to her is her biggest satisfaction.

My four-year-old son’s face lit up when he heard his favourite character’s voice on the phone. Since he is young enough to believe that animated characters are real people, there wasn’t even a moment’s hesitation before he started speaking to Sonal like an old friend. “Doraemon.. tum raccoon dog ho na?” he asked mischievously (for the uninitiated, Doraemon hates being mistaken for a raccoon dog). Sonal played along and when she addressed him by name, his excitement knew no bounds. “Doraemon knows my name?!!!” he exclaimed.

Many of us are lucky to have jobs that we love. But very few are blessed enough to spread happiness among our innocent, little ones. The next time you hear the children in your family giggling over the antics of Nobita, as Doraemon tries frantically to help him out of the mess he is in, do spare a thought for the voice artist who spent hours in a recording studio to help make it happen.