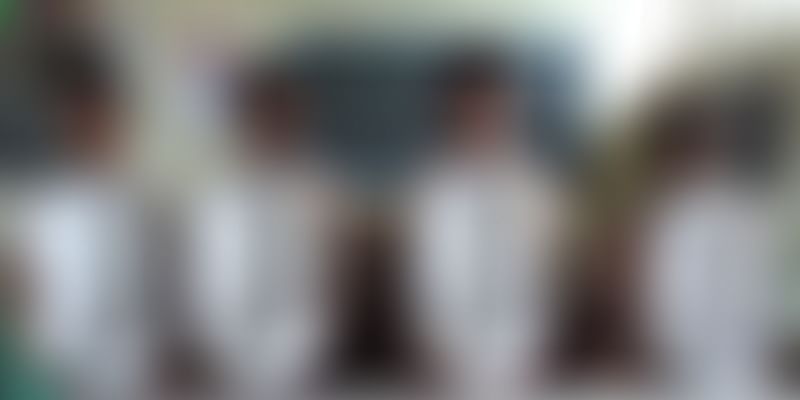 A persistent stench was present in the classrooms of Panchayat Union Middle School in Kurumbapatty every day. This was due to the lack of proper facilities in the school, as a result of which the walls were being used as urinals. The school, located in the Thirucharapalli district of Tamil Nadu, saw many students falling sick and taking leave. Realising that this stench was the primary reason for so many students falling sick, five students from the school decided to take matters into their own hands and turn things around.

A non-profit organisation, Design for Change, has devised a simple four-step formula, Feel-Imagine-Do-Share. This formula inspired these five boys to find a solution to the problem on their own. These 13-year-old boys -- Supikpandian, Santhosh, Dhiyanithi, Ragul, and Prabaharan -- formed a five-member committee to carry thorough investigations into the matter. On trying to find the source of the stench, they soon realised that the reason for the same was the school toilets. Since the toilets were ill-equipped, the boys had to resort to urinating on the compound walls or floor.

As they were urinating on the floors, their sandals and feet were sprinkled with drops of urine. When these students entered the class, the stench was carried along with them. This, along with the poor drainage system of the toilet, resulted in numerous urine infections.

As a solution to the problem, these boys came up with the idea of designing urinals from 20-litre water cans, and have also developed a proper grid of pipelines for the disposal of waste. They termed this invention of theirs the 'Safe Mode Pissing System' or SMPS. They registered themselves in the Design for Change-organised challenge called 'DFC I Can School Challenge 2016' . They were given thirty days to brainstorm and come up with an idea that they could execute. The result was this urinal plan, which received the 'Boldest Idea Award'. As a part of the award, the students were given medals and a Rs 50,000 cash prize.

The students observed a striking resemblance between an upside down 20-litre plastic bottle and a urinal. Under the guidance of Kesavan D., they further thought of cutting the bottle longitudinally to build urinals. Their invention costs only Rs 600. One of the biggest reasons for them zeroing in on water cans was how reasonable they are. According to The News Minute, Kesavan said,

I am very proud of their creativity. This idea not only helped their school, but also their neighbouring school. We went to that school and gave them tutorials on how to use it. They have now given away their original urinals and are using ours. This is a proud moment for our school and our district.

While speaking about the tight budget, Kesavan said,

The boys wanted to do something that would be affordable for their friends and family. They didn’t want anyone to double think before buying the urinals because of the cost.

Once they built the urinal, they started working on how to fit them into the toilets. Using the funds that had been collected from the students and teachers, other necessary parts like pipes were bought. The walls of the toilets were repainted to bright green, and the drainage system was then set up in such a way that urine could exit easily through pipes connected to the bottle necks. A line of drip irrigation pipes were set up above the urinals to flush after use.

The students are now visiting different schools and explaining the problems that come along with unsanitary toilets. According to The Better India, speaking on the impact of their project, the students said,

We can implement this project not only in schools, but also in houses and public places. We can prevent urinary infections and stenches by implementing it. This will reduce the number of patients in the community. Through this project, we can make the country clean and hygienic. We can observe the motive of the scheme Swachh Bharat (Clean India).