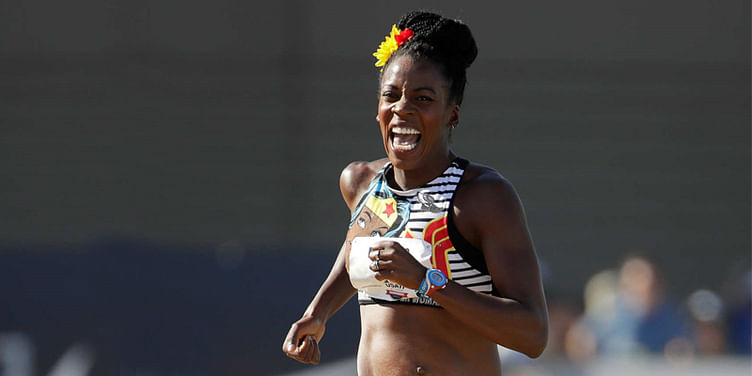 The 31-year-old from New York participated in the 800m heats during the US World Championship trials.

American athlete Alysia Montaño ran the 800-meter race at the USA Track and Field Outdoor Championships trials in Sacramento last week. What’s remarkable is that she is five months pregnant with her second baby. Viral photos of Alysia running with her signature flower in her hair have won her admirers the world over. Alysia started wearing a flower in her hair as a symbol of strength without negating her femininity.

Last week was, in fact, the second time Alysia has participated in a race while pregnant. In 2014, she competed at the same event while eight months pregnant with daughter Linnea, who is now two.

Alysia finished last in her heat this year, but she told the media that she didn’t come to win and her intention was to represent women like her.

Alysia said, “I think there’s something about coming out to any venue, not really expecting to win, but just going along with the journey and seeing what comes out of it. And that’s the most beautiful part for me, being a track and field athlete. The platform that I have, I feel so responsible to be a representative of people who don’t have the same platform, don’t have the same voice that I do.”

Alysia has spoken about how there’s a stigma against women exercising while pregnant. Exercise during pregnancy, she feels, can be normalised. In India, especially, we see extremes where women from the lower socio-economic strata often have no choice but to continue with physically strenuous work for their livelihood, whereas women who are financially sound fear exercise for fear of harming the foetus. However, for an expecting mother who is healthy and has the approval of her doctor, moderate exercise is essential.

Alysia herself was inspired by Wonder Woman star Gal Gadot and so wore a Wonder Woman top during her race. Gal Gadot was five months pregnant when she shot for parts of the superhero movie and her baby belly was later edited out with CGI.

Alysia said she felt no ill effects after her run. She explained, "I know how to take care of myself. I drank a ton of water, took a lot of electrolytes, which is not always the case for women who have babies in parts of the world that are much hotter than here."