Austria is betting big on startups and trade with India: Michael Linhart of the Austrian Foreign Ministry 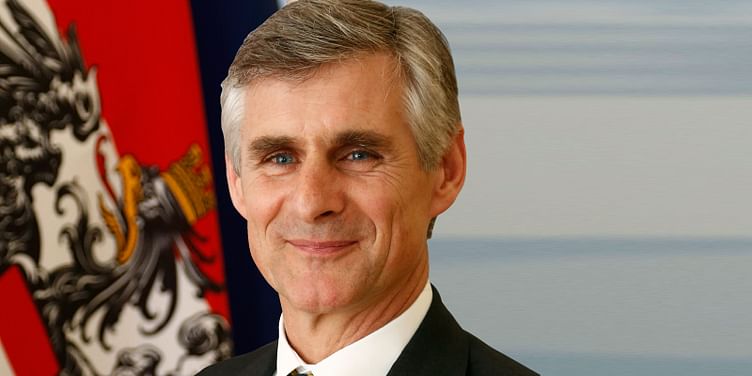 germanyWe all know Vienna as one of the world’s culture capitals, but what surprised me is how the city is pushing to become the digital epicenter for startups across Europe.

I was part of the Austrian Leadership Programme arranged by the Federal Ministry for Europe, Integration and Foreign Affairs, Austria, last month. It gave me an opportunity to catch up with Michael Linhart, Secretary General of the Austrian Foreign Ministry.

In an hour-long interaction, he spoke at length about Austria’s focus on the digital economy and its role in spreading peace in the world. What stayed with me long after the meeting ended was his drive and zeal – representative of Austria’s goals – to create successful partnerships across the world whether in the startup ecosystem, cultural initiatives, business, and technology, or a large-scale humanitarian effort while staying neutral. And that’s easier said than done.

Here are excerpts from our conversation.

Shradha Sharma: How are you looking at the digital economy in Austria?

Michael Linhart: We think this is necessary for the future as new technologies open up new business opportunities and possibilities. For example, in the health and renewable energy sectors, there is a lot we can do. We are trying to offer that to the world as well. The important thing is that it has to provide real benefits to the people and their families.

In Austria, 85 percent of households use the internet, and nine out of 10 companies use social media. But there’s a lot of work to do.

There’s a lot of innovation happening. And a lot of it is driven by young people.

We have established startup outreach offices, for example, in Silicon Valley. We have scientific attachés in China and the US taking special care of those innovations. There is a lot of effort being made by the government. We have tried to support digitisation as much as we can. But, of course, it (the innovation) has to come from the people.

Our Ministry was the first one in the ’90s that used electronic files. And as (part of the) government, we were constantly encouraging experimentation with new technologies. We now have e-administration where most issues are addressed via the internet. Applications for many official documents are supported by the internet (e-government). Because of digitisation, we have a less bureaucratic administration, which makes work easier, transparent, and cheaper. All this brings (about) development. And we work together to make things happen.

SS: How is the Austrian government supporting the startup ecosystem?

ML: It is gaining more importance for our government, in general. We have, for example, a startup package that was launched this year with €100 million. For us, it is a big investment. And there is more to come.

SS: So it was the government that made these investments?

ML: Yes, through subsidies. Then we have all kind of supplementary measures: young innovative firms can get refunds of auxiliary wage costs for the first three employees over the first year. And the amount is cut down each year. Payroll taxes can be reduced. (Nearly) 1,500 startups have benefited from this initiative. And then, of course, we have other initiatives like ALPS and so on, where we try to promote startups.

SS: Could you tell us something about the Open Austria initiative?

ML: We work with the Austrian Chamber of Commerce. The initiatives for startups come under this, and this is a priority area for us. We have a young minister (Sebastian Kurz, Minister for Foreign Affairs and Integration) who puts a lot of emphasis on that. He was the initiator for the startup outreach office in Silicon Valley. It's only a beginning, but we are working a lot (to make it bigger).

SS: What I hear from you is that there is going to be a lot of focus from the Austrian government in creating a whole new startup ecosystem here.

ML: Yes. We think this is the way forward. Also, collaboration with startup ecosystems from across the world is the way to go. And we try to promote those who are abroad through our Foreign Ministry. For us, all of these business services are extremely important. We also have an initiative where we look at good models abroad and present them in Austria. This was an initiative taken by our minister. We invite entrepreneurs who have been successful abroad with their startups to present what they have done. They tell us about what the environment was like and set an example for others – how to do it, and how to work on it. Essentially, share the best practices.

For the Ministry of Economy, this is a priority. We have had a reshuffle in the government and the State Secretary that we had until now is now the minister. One of his main objectives is to promote startups in Austria. So even when he was the State Secretary there was somebody in the government to take care of that. And this is very much supported by our Foreign Minister, Sebastian Kurz.

SS: What do you think is the role of Austria in the European Union and in the world? One thing I gathered from my trip is that it’s very neutral – spreading peace – and ensuring that there is positivity. But how do you envisage your role, especially being at the center?

ML: We are a country which is working with principles, and we try to build upon our policy according to that. We are a reliable partner within the European Union, where we stick to negotiated contracts, and we are neutral. Neutrality is in our Constitution. That also means we are trying to be a mediator in different conflicts, not only outside Europe but within as well.

We take responsibility in international forums to ensure peace. For example, at the moment we are chairing the Organisation for Security and Cooperation in Europe. Next year, we are going to take over the presidency of the European Union. We are candidates next year for the UN Human Rights Council. We are also home to organisations such as OPEC or the International Atomic Energy Agency, which are headquartered in Vienna.

So, based on this position that we have developed, we try to be present in the world with this responsibility that we are taking on. And of course, we also know Vienna as the place of dialogue, of negotiations. We had the Iran talks, the nuclear talks, in Vienna. We’ve also had the Syria talks in Vienna. Developing cooperation is important for us, and we try to increase our share in that. We

We recognise that we have a role to play in ensuring peace and stability within the European Union and around the world. We are cognisant of the fact that there has been peace in Europe for such a long time now, and we need to ensure that's the way to the future.

SS: What is your view of the Indian market? And are you looking at building relations there?

ML: Well, I think India has really managed to change its image – from a country which was seen as a developing country with a certain level of poverty, to a country that is very dynamic and active in new technologies. It is developing very fast and taking up international responsibilities. We know that there are still problems there, and those problems have to be tackled.

SS: We are changing rapidly.

ML: Yes, and we have realised that too. I think India’s image has really changed. Young people have realised how much effort has gone into the education (behind the) computerisation and digitisation. We were looking at some of the business models – looking at how much they are doing – how many experts you have there, the international companies that are serviced from India… I think this is something that is known, and we see the potential. And for us, of course, you are a big country of 1.3 billion people, a global player.

We have absolutely recognised the importance, and what I mean by that is that (India) is not only economically but also politically large. And, for us, of course, it is a big market. We have €1.5 billion of trade volumes with India. Three hundred Austrian companies have a presence in India – it is the biggest, most important trading partner (for us) in South and South-East Asia. We have (another) 130 companies with offices in joint ventures. So, I think there is a dynamic exchange taking place.

We have tried to service the market with different high-level visits. Our minister was in India in the beginning of 2016. He was accompanied by the President of the Chamber of Commerce with the 70 companies that were in the delegation. And I can tell you that 70 is a huge representation for us. It’s really huge. So, there is a lot of interest from our side. We see you as a great partner.

ML: What drives me is that we have a beautiful country, we have a lot of expertise, we have a great culture, and we have a relatively tolerant society. This is something that we can bring to the world. We are a reliable partner when we go into business with a country.

We don’t have hidden agendas. It’s not politics that’s behind us. We want to be a fair partner and go into a trade (agreement) that is a win-win situation for both sides. We are helping where we need to help, as we have shown in the migration crisis here. So, all that together is a lot of motivation that makes us work for the country.

And I must say the instruments you know that we have, are fantastic. We do a lot of cultural projects abroad and through the cultural projects with our music, cultural heritage, art, and architecture, we reach people. We open doors. We reach institutions and politicians and the business community with our high technology. We know that we are always well received for our position (based on) principles. And we have always got a positive response. I think it’s nice to work for Austria.