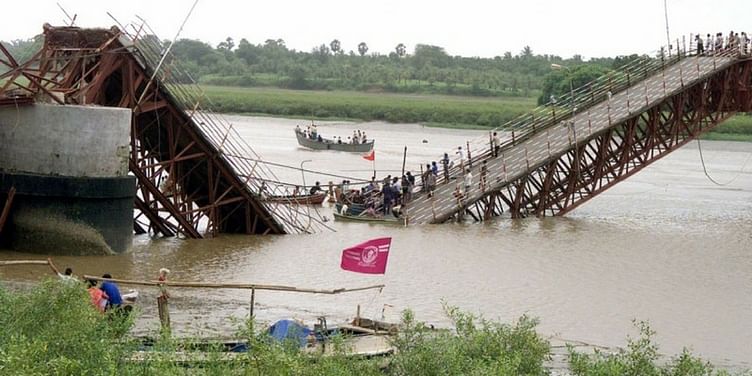 An old masonry arch bridge on Savitri and Kal rivers near Malad in Maharashtra had collapsed on the night of August 2, 2016. This 5.90-metre-wide and 184-metre-long bridge constructed in 1928 collapsed due to heavy rainfall. According to Press Information Bureau (PIB), Nitin Gadkari, Minister for Road Transport and Highways and Shipping, had immediately announced the construction of a new bridge within six months.

According to IANS, the official statement made on June 4, 2017, said,

The project was speedily executed in a record 165 days before the onset of monsoon at a cost of Rs 35.77 crore.

Gadkari along with Maharashtra's Chief Minster Devendra Fadnavis will inaugurate the newly built Savitri bridge and open it to the public today.

According to The Times of India, Gadkari said,

We have created a record. Maharashtra Chief Minister Devendra Fadnavis and I will inaugurate the bridge on June 5. The focus of infrastructure development should be quick delivery and using new technology for faster pace of construction.

According to PIB, the design and a detailed estimate were prepared by the State PWD in-house within three weeks. This was then submitted to MoRTH, New Delhi, on August 20, 2016. The estimate was sanctioned by the Ministry of RT&H on September 2, 2016, and the tenders were called on the same day. It was by December 1, 2016, that the lowest tender was accepted and the agreement was signed. The project was assigned an appointed date by December 15, 2016.

The 16-metre-wide and 239-metre-long bridge has a lighting arrangement, flood alarm system, footpath, and anti-corrosive steel. The new bridge has been constructed keeping road safety measures in mind and has made use of anti-carbonation paint as well.