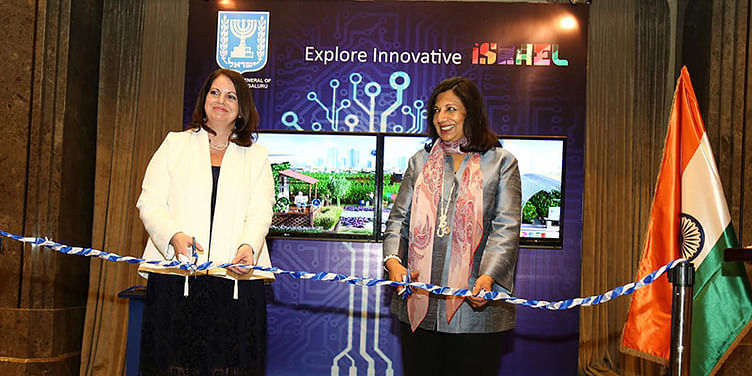 Recognising the need for women’s continued contribution to ‘make the world a better place’ through tech innovations, the fifth edition of the Start TLV Competition was officially launched in India.

Following last year’s tremendous success, the 2017 competition in India will focus on women-led startups under the umbrella of Israel embassy’s 25 years of growing partnership between India and Israel.

Start TLV is a global annual event organised by Israeli MFA and Tel Aviv Municipality. Technology startup finalists from 23 different countries around the world will convene in Tel Aviv, Israel, in September 2017, to take part in an intense five-day Startup ‘boost-camp’ in collaboration with DLD Innovation Festival.

The winning startups will join local Israeli entrepreneurs and participate in lectures, workshops, and meetings with leading Israeli and international investors and professionals.

Expressing his appreciation for the growing Indian startup ecosystem and its compatibility with Israel’s ecosystem, Ambassador Daniel Carmon said: “This is another area in which the growing partnership between our countries can bloom. Our joint power of innovation will transform our societies and economies for the better and will have a positive impact on the world.”

Ambassador Carmon also emphasised the need to guarantee the sustainability of these ecosystems through the full integration of women’s power of innovation.

The competition is officially open for entries. The deadline for entries is July 7, 2017.

Five finalists will be invited to Delhi on July 24 to pitch their startups - both the technology and its social impact – to a panel of experts who will then choose the winner.

The Embassy has partnered with Startup India, TiE-NCR, YES Bank & YES Global Institute, in its search for upcoming women-led tech startups with a social impact.

Despite being a tiny country and just 69 years old, Israel has become a global hub for technology and innovation, as well as art and culture. Second only to the US, Israel has generated more startup companies than other nations like Japan, China, India, Korea, Canada, France, Germany and the UK. In addition, Israel has, per capita, attracted over twice as much venture capital investment as the US and 30 times more than all the members of the European Union combined. The amount of GDP spent on R&D in Israel is the highest in the world (3.9 percent).

Tel Aviv is the business capital of Israel and a leading innovation hub with a local ecosystem of world-class tech talents, dozens of leading multinationals and hundreds of tech star startups.

Past winners from India

Mausumi Acharyya of Advenio, which specialises in low-cost healthcare, and Komal Talwar of XLPAT Labs, which caters to online patent search and analysis, were the two women Indian entrepreneurs who represented India at last year’s Start Tel Aviv workshop in Israel.

Some of the other winners in the general category who went on to represent India at the Start TLV event were as follows.

NowFloats represented India at Start TLV 2013. Ronak Kumar Samantray, Co-founder of NowFloats, who travelled to Tel Aviv, said, “We formed lasting connects and friendships with some of the people we met. Thank you to the Embassy of Israel in New Delhi and TiE Delhi.”

Pavan Thatha of Shield Square, who won the Indian finals in 2014, said, “Participating in Startup Tel Aviv was a great learning experience for us. We had the opportunity to have one-to-one interaction with serial entrepreneurs in the security space, which helped us in refining our product roadmap. DLD Tel Aviv is a must-attend that provides great networking opportunities."

Gautam Shewakramani, Founder & CEO of AudioCompass, which turns smartphones into personal tour guides, who won the Indian finals for Start TLV 2015, said, “Winning Start Tel Aviv gave us global exposure to other startups and entrepreneurs. We were able to share ideas and learnings from different markets. Start Tel Aviv enabled me to connect with innovative Israeli companies in similar fields to explore licensing and technology collaborations.”