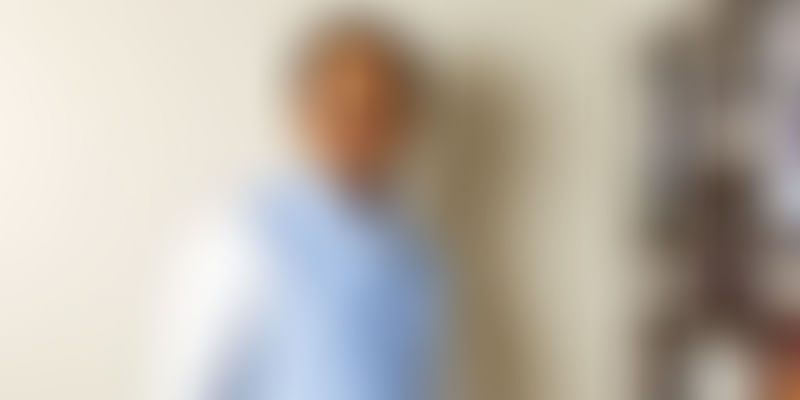 While an ordinary shave lasts 15 minutes, a royal shave is 45-minutes long–it starts with a hot towel, a moisturiser, shaving cream, a massage, some more hot towels, and lastly, strokes of 211-year-old genius.

In the part of the 19th century, when regular visits to the barber were essential to facilitate the wearing of wigs by gentlemen, the coming together of William Francis Truefitt’s Gentlemen's Barber Shop and Edwin Hill & Co.’s own setup at the Old Bond Street was, thus, the stuff of an old gent’s most coveted fantasies. Till this day, every Truefitt & Hill across the world greets its customers' shave requests with hot towels, and warm hearts.

But getting the 211-year-old brand’s legacy to India was no mean task. In a country where the concept of masculinity sends the Chandlers here constantly reaching for their big boats at so much as the sight of a luxurious bubble-bath, here’s the story of how Istayak Ansari dared to sell men the tender loving their skin desperately needs.

From the grind to the climb

Thirty-nine-year-old Istayak started working at his father’s baking business while he was still in college, and fell in love with the adrenaline rush of keeping a business afloat. When he was 20, however, he lost his father, and his dream of entering the world of advertising turned on its head, as time was running out but offers ran thinner.

Getting a job at Zee Interactive Learning Systems, he started by selling software to schools and colleges, and then selling online courses to college students. They moved him to their franchising division next, where he came to handle Maharashtra, Gujarat, Madhya Pradesh etc., and opened up 25 franchises in the short span of one year.

He then moved onto Gold’s Gym, where he was hired as franchise manager for their Mumbai division in 2004. Istayak helped scale the brand from four to 86-plus open and operating gyms by 2013.

“Franchising as a function has a 45-50 percent profit margin on the revenues generated. I was handling a department that was throwing up a lot of cash,” he explains. Hence, Istayak got about six promotions in the span of nine years, and became the youngest Chief Operating Officer in Asia of a fitness company.

His career had clearly seemed to peak–but he did not see it that way. At 35, he remembered his original plan and told himself it was now or never.

"I had done zero groundwork when I put down my papers, but I was as ready as ever,” he recounts. From his robust network, when word got around that he had quit, several offers surfaced–one of which was from the owner of Lloyd’s Luxuries. A 15-minute discussion in November 2013, and Istayak had his next challenge cut out for him.

Barbershop operators did not upgrade themselves in the past 20 years, technically leaving the premium space open to be exploited. The only premium operators in men’s grooming space were five star hotels like the Taj, Leela and Oberoi chains, which is the opportunity Istayak and Krishna Gupta of Lloyd’s Luxuries saw–and Truefitt & Hill was the obvious choice with its legacy, and range of premium men’s grooming products.

They acquired the master franchise rights for Truefitt & Hill for India, Nepal, Bangladesh, Sri Lanka, Bhutan, Myanmar, and Vietnam, and by May, opened up the first outlet in Khar, Mumbai.

“Everyone told me that it was the worst mistake of my life, as men’s grooming is a niche category and only accounts for 10-15 percent of the total grooming market. There are mostly mom-and-pop shops in the luxury category, which charge 50 to 200 rupees for a haircut, and most of them shut shop. But, the backing of a brand helped. Secondly, we have about a 150 men’s grooming products; it’s one of the largest ranges of products in this category,” he says.

The total setup cost varies from Rs 1-1.5 crore, based on size of the store. Their store size varies between 1,000 and 1,500 sqft carpet. Rigorous training is imparted to the staff. A master trainer from Truefitt & Hill UK is also flown down every six months to train their staff on the latest trends and techniques.

The store's ambience and layouts are as per Truefitt & Hill's global standards, and the services and products are uniform across all stores in the world. For example, a shave is 45-minutes long–it starts with a hot towel, a moisturiser, shaving cream, a massage, etc.

“It was difficult for a company to explain a 45-minute shave in a newspaper ad. So, we got into experiential marketing. We invited members and their friends for an experiential service, through tactics like tying up with a luxury car company to distribute our vouchers etc., to reach out to the correct type of audience. We got very high conversions from that exercise," he says.

By the end of 2014, they had opened their third store at Palladium, and the next two at Pedder Road and Lokhandwala–the former giving them a massive push because of its sprawling, unmissable nature.

Today, there are ten stores across Mumbai, Delhi, Gurgaon, Bengaluru and Hyderabad, and eight new stores in the pipeline across Kolkata, Chennai, Chandigarh, Pune, Jaipur in India and in Dhaka and Colombo.

Around 2014, Istayak also started his second venture with some family members called Puriso–handcrafted soaps that are completely natural, with ingredients like botanical extracts, butter, oils, and glycerine sold through various portals and supplied to major spa and salon chains in India.

His third venture was 1441 Pizzeria, a popular eatery in Mumbai serving authentic DIY Italian pizza. Its concept and menu have been designed and created by the Italian Pizza master chef Renato Viola who also trains the chefs personally. He chose the quick service restaurant (QSR) format because it’s scalable.

They currently have two high street locations at Fort and Lokhandwala and three shop-in-shop locations with INOX cinemas in Mumbai, and plan to open eight new high street pizzerias and six more shop-in-shop pizzerias this year. He also lets on that he may be opening up a gym sometime soon in future.