Why this French entrepreneur chose to start up in rural Bengal 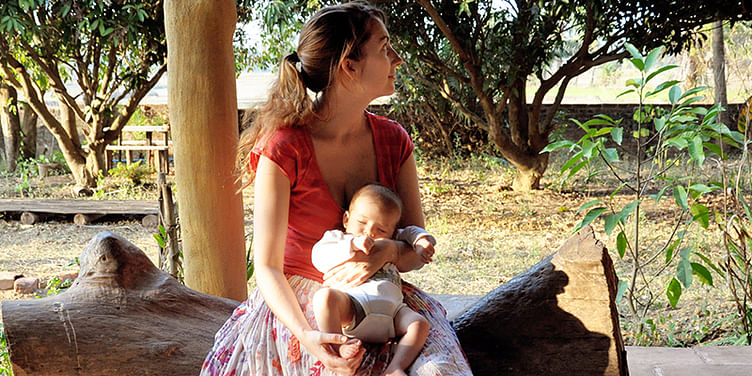 Marie Ghyselinck chose an unusual time to start up. The Frenchwoman was in rural India and heavily pregnant. The former urban planner from Paris had realised her heart was not in office work and yearned to make a change. She came to India with her partner and chose to live in Shantiniketan. A heritage rural town about 200 kilometres from Kolkata, Shantiniketan is as famous for its cultural milieu as it is for the two Nobel Laureates, Rabindranath Tagore and Amartya Sen, who called it home.

From Paris to rural Bengal

Marie and her partner liked Shantiniketan so much that they decided to raise their family there. It was when she started looking to assemble clothes for her baby that a new life calling made itself heard. “A friend introduced me to a very talented tailor when I started to design clothes for my unborn one. I quickly decided to expand the production and began working closely with the local craftsmen and women,” says Marie.

The decision was not based on a whim. Marie says, “When I started I was aware of a strong market. People in Europe really like to buy baby clothes that are not mass produced but made with care. I knew that a high quality hand-embroidered product made of Khadi or Malkha cotton will be highly appreciated in western shores- the market that I was specifically targeting at the beginning. Though our small production initially started to sell in France, my objective was to develop the market in India eventually.”

Story of a name

Before settling down in Shantiniketan, Marie and her husband had been working with painters from the Santhal tribe. Upon hearing stories of their traditions they came upon the name 'Marangburu'. “Marangburu is one of their gods, one whose story I heard at a time when I badly needed guidance in my life. For me Marangburu appeared as a big brother, a guide for the recently born human beings. It sounded like a good and meaningful name for the project I had in mind,” she says.

Launched in 2012, Marangburu creates baby clothes with handloom weaves, indigenous fabrics and intricate embroidery, the skills of which are passed down through the generations of the local artisan families. Though Marie was assured of the market such products would have in Europe, she underestimated the power the recession would have on people’s spending power. She says, “While people became more careful about how they were spending their money, they were also more concerned with buying sustainable high quality products that would last a long time.” On the contrary the market for high-quality hand embroidered textiles and products in India keeps growing each year.

In fact, though Marie had started out with Europe as her primary target it is the Indian markets that pleasantly surprised her. “More and more people in India are realising they should protect their legacy crafts and buy more responsibly, especially for their little ones,” she says. Though competition for handmade baby clothes in Europe is brutal, Marie says that Marangburu manages to stand out because of its authentic and unique offerings. But it is in India that she is really prospering.

Though mass consumerism is hyper-prevalent in India, there is a thriving handloom and handicraft industry. Most of their products, however, focus on adult fashion, lifestyle and home décor. With her focus on baby clothes, Marie finds herself being one of the few niche sellers in this category. “In India, this is just starting to develop,” she says. “Very few people are doing the same kind of work as Marangburu- simple elegant handcrafted baby clothes.”

Marangburu doesn’t have a website, relying on a Facebook page and word of mouth to keep itself going. Marie says, “We find social media communication to be quite effective. We also place our products in a few selected exclusive boutiques that already have their own clientele.”

Marangburu was bootstrapped with Marie’s own savings. She says, “We are a small company with small needs. Most members of the team work from home using their own equipment, and we rely a lot on people’s goodwill. Within a year we had recovered my initial investment and could pay forward for next year’s production.”

When asked about revenues maintains that this is a social enterprise. “We are not looking for big profits,” she exclaims. “Having said that, we’ve been able to sustain ourselves quite well for the past five years and provide livelihoods to many underprivileged families during this period.”

Marie has no plans to scale her business. “We would rather focus on quality than quantity. Our sense of impact comes from the new sources of income we have provided to the local craftsmen and women or the local skills like embroidery or wooden button making we have supported,” she says.

When Marie first arrived in Shantiniketan, she couldn’t speak a word of Bengali. “It is not always easy to work with people from different backgrounds and cultures. The differences can be huge, but with good communication, we can overcome anything,” she says.

Marie loves the creative part of the business. Designing apparel, playing with textiles and working with local artisans is a dream job for her. “I don’t come from an entrepreneur’s family neither did I train to be one. Overcoming my shyness and asking people for money is something I still struggle with. I am working hard to overcome this,” she shares.

Though Marie shares many aspects of her entrepreneurial journey that was hard, not a single one of these mentions include starting a business while pregnant. “Ask around,” she smiles. “Pregnant women grow wings. Somehow it seems we have new energy and a renewed enthusiasm to make the world a better place for our children. I had stellar examples around me.”

Starting up has been rewarding for Marie in many ways. “But the best thing has been to see my child, my muse, wearing the clothes I designed for him. Also the response we get from customers who understand the way we work and the values we cherish makes this all worth it,” she says.