With myHarvest, city dwellers are growing their own pesticide-free food 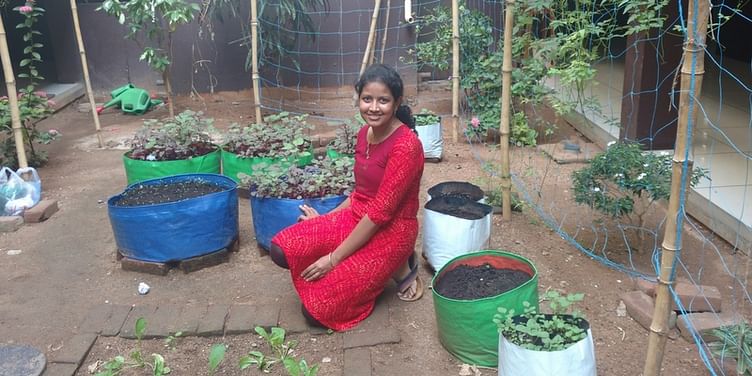 Three people left their jobs to begin their passion project, myHarvest, with the aim to encourage people to grow what they eat.

With no background in farming or gardening, the myHarvest team has gained experience through self-learning, meeting people who are already in the field, and by practising it themselves.

“One in two women in India has anaemia, something that can be changed with a better diet including more greens. This is one point of motivation for me to work in this field,” says Archana Stalin.

MyHarvest’s revenue model is simple—a customer purchases a package of minimum five vegetables or plants, depending on their requirement, at a minimum cost of Rs 3,000. This package contains soil, seeds, fertilisers, and other necessary equipment.

Once a customer contacts them, the team visits their house to know their requirements. The customer is given a list from which he/she can choose what he/she would like to grow. They are also informed about how to use the tools and grow the vegetables. Depending on the package chosen, myHarvest offers one or two complimentary visits. “The idea is to be with the customer till the first harvest,” she adds.

Additionally, offline and online support is available if they have questions and concerns. The customers are added to a WhatsApp group with offline support personnel. This provides a space for customers to share photographs and updates about the progress their plants are making. It helps in keeping customers engaged and motivated throughout the process.

The myHarvest team prepares the soil and fertilisers like panchagavya and the seeds are sourced from native seed suppliers and organic shop vendors across Chennai.

Based in Chennai, myHarvest is the brainchild of 28-year-old Archana, her husband Stalin Kalidoss, 30, and her brother, Somu Kalidoss, 32. It was Somu who started the pilot project in Madurai, and Archana accompanied him whenever she could. After they reached 40 houses, Archana thought it was enough validation to leave her job and start working on it full-time.“I always wanted to start a social enterprise,” she adds. They have offered their services to over 90 houses and 6 schools till now.

“When we were building our house, we decided we would work on water management through rainwater harvesting and create an edible garden,” Archana says. “With this, our family diet also changed since we started consuming more greens,” she rejoices. Archana observed how a change in their diet reversed her father-in-law’s diabetes.

This was also the time when Archana’s own kitchen garden got covered by local newspapers; and as a result “people started calling and asked me how to go about it,” she says.

Fruits and vegetables are sometimes coloured with copper sulphate and injected with hormones to give them a fresh appearance. Although people are aware of chemicals in food, they don’t always have alternatives available. Even if one sourced food from an organic store, they would have no choice but to take the word of the ‘organic’ label.

It was to reduce this dependency and eliminate the unnecessary task of washing pesticides off vegetables that Archana and her team decided to come up with an easy solution through myHarvest.

MyHarvest wants to focus its efforts towards garden-based learning in schools and is currently working with three schools in Chennai. There are three ways in which this will be approached. One way is to conduct one-day hands-on workshops where children will be provided with kits consisting of soil, seeds, and a pot and will be guided on how to grow those plants at home. The idea is to make children involved and take ownership for growing the plant.

The second approach is a two–three-month programme where myHarvest and some school children will work on gardening in their school, connected with the notion that children often waste food and may not know why it is important to not do so. “The children will be able to see how much effort goes into preparing the food and be more thoughtful,” she adds.

The third type of programme is where children will be taken to farms on the outskirts of Chennai. The aim is to help children visualise the series of events it takes for food to reach their plate.

“We do not market ourselves as gardeners—we guide the people to grow the produce themselves. At the end of the day, it is their effort that reaps a fruitful farming experience for them,” she says.

In metros like Chennai, where most people stay in apartments, there often isn’t enough space for kitchen gardens. To address this severe limitation, Archana wants to study vertical farming methods and collaborate with trusted farmers and suppliers, so that the produce directly reaches the customers who don’t have kitchen gardens.

They have recently introduced, 'myHarvest boxes’ that make a unique gift and give the recipient the chance to grow their own vegetables like organic keerai/greens. It is a DIY kit where the produce can be harvested within 25 days. They also want to expand their efforts to other cities and while they have so far been investing their own money, they wish to raise funds in the near future.