Meet the engineer who quit his job and planted over 40,000 trees in 14 years 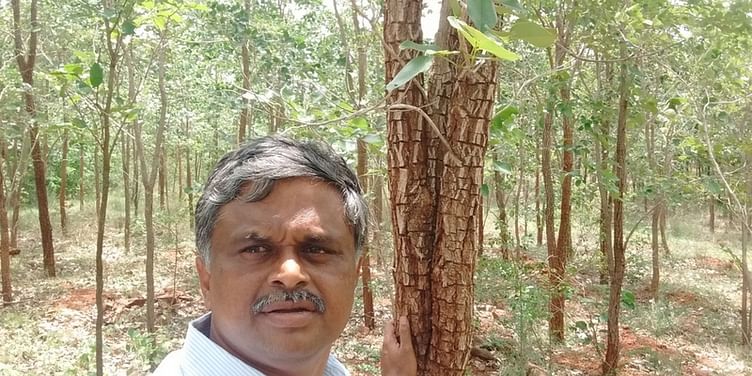 Ganesan RP is an engineer from Tamil Nadu and has been working on his 50-acre farm, Brahmanavam, since 2003, studying and growing plants.

Ganesan took up engineering and started working after his degree. It was in 2003 that he left his job in pursuit of his passion. “I was not happy with my line and after some internal analyses, I realised I should give some thought to what I am passionate about,” the 50-year-old says.

“During my school days I used to plant a lot of trees. So I thought that maybe this is my line. My neighbour at that time was working in human resources and since they are insightful people, his encouragement confirmed that planting trees is something I want to do,” he adds. Ganesan has over 50 acres of land at the moment, while most of it is his ancestor’s property, he purchased parts of it later on.

After his engineering was over, Ganesan planted tamarind. But it failed over time. Similarly, his father’s mango plants, planted way back in 1975, bore no fruit as well. In 2003, Ganesan started by planting 2,000 trees, out of which only a thousand survived. From his past experience, Ganesan thought it would be wise to consult experts who could guide him. “Initially, the toughest part was to analyse the kind of trees that could grow well in the dry, laterite soil of my area,” he says.

One such expert introduced him to the tree called red sanders. So from 2003, he spent a year studying books and meeting farmers to know what kind of trees he could plant. “I adopted even the smallest tips given to me by farmers,” Ganesan adds.

To sustain himself, Ganesan has rented out a property, which provides him with a steady flow of income, as it is difficult to support a family solely through the means of dry land agriculture, since the income is negligible.

While Ganesan resides in Hosur, Tamil Nadu, his farm is situated 100km from Hosur. The 50-acre farm has over 40,000 trees today, all planted over a span of 14 years by Ganesan, singlehandedly. He manages the farm without using a tumbler to water the plants. His farm retains 100 percent of rainwater through a rainwater harvesting system; the water that drips down from the upper land next to his farm is an added advantage.

Ganesan spent four years studying red sanders. “Like humans, trees also have a native place. The native place of red sanders is Tirupati in Andhra Pradesh. Soil differs within 100 feet, so to understand and see the practicality of the soil, I went to Tirupati in a borrowed car. I studied the root formation, the soil type and discovered that trees there survive only on rainwater. I also met the District Forest Officer (DFO) at Tirupati and got some insights from him,” Ganesan says.

From his experience of working at his farm, Ganesan learned that a forest environment essentially requires more humus in the soil due to its water retention capabilities. A common practice among farmers is to remove weeds and wild shrubs; but since not all are harmful, Ganesh retains some as they are essential for water retention in soil.

According to Ganesan, the soil type is very important. Plants and trees won’t grow if the soil is not suitable. “If I were to change the soil, I can only manage to change 10 cm of it, 4-5 feet worth of soil change is very expensive. Therefore, it’s important to study the soil before planting anything,” he explains.

Today, the majority of the trees in his farm are red sanders and there are over 100 species of trees and plants, such as teak, mahogany, ailanthus and pterocarpus marsupium. Gliricidia is used for mulching and fodder along with drumstick and subabul, others are medicinal plants and nitrogen-fixing trees for vermicomposting.

Fire is one of the major issues that Ganesan faces. “People who smoke put out their cigarettes, which can sometimes cause fires. So I wanted to think up some solution. Sheep is good for grazing and don’t disturb the trees. This ensures the grass’ height is limited and this way summer fires are avoided,” he adds. Additionally, aloe vera can be planted near the trees to avoid fire.

Removal of old colonial forest procedures on farm trees still poses a challenge for the farmers in Tamil Nadu. For this purpose, Ganesan wants the Timber Board to come under the Ministry of Agriculture, rather than the Forest Department. The ministry has greater knowledge about the soil, the market potential in a particular area and can suggest the right combination of crops and trees to be grown.

Future plans for the farm

Ganesan is currently studying and researching food farms so that there is availability of fruits and vegetables throughout the year. For this, he needs to find out about the plants and trees he can grow in his farm. Some of the shortlisted ones include mango and moringa. “It is important for me to chalk out different combinations of these plants that can grow together. For this, I need to consider if a plant is shade loving or light loving, the height it grows to and the water consumption it requires. For example, jackfruit grows well under the shade of coconut trees and pepper can be added as a creeper,” he explains.

Ganesan also wishes to work on a park where he plans to grow trees native to the area that will provide shelter, shade and fruits to the birds.

Today, Ganesan is a happy engineer who discovered and followed his passion of growing trees and will continue to do so.