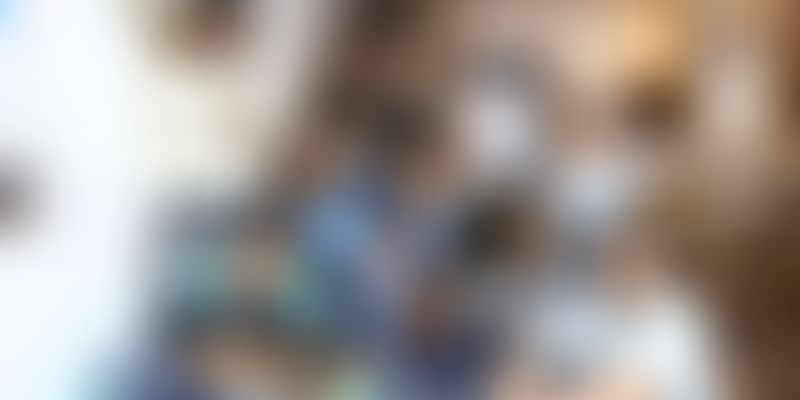 Play Shifu is a startup that makes augmented-reality based games for children between the ages of two and 10 years.

Thirty-one-year-old Vivek Goyal and Dinesh Advani faced the same problem as parents. They understood that learning and development in the early stage are centred on play and entertainment.

Being tech enthusiasts as well, they explored augmented reality, an upcoming technology, as a promising tool for creating engaging methods of early learning. “Our aim was to make the ‘screen time’ good and help children in the stages of cognitive development, creative skills, and linguistic building, at the same time,” says Vivek.

What are the products?

Dinesh and Vivek launched Play Shifu, an augmented reality technology startup. They make innovative augmented reality based early learning games for children in the age group of two to 10 years. The concept is to merge tactile and digital play patterns so as to engage, entertain, and educate children like no other digital medium.

Beginning in March last year, the team rolled out their first product Shifu Safari, in August. “The initial feedback was very encouraging but being parents ourselves, we had to work out the challenge of satiating our own standards of what children love and learn from our games,” adds Vivek.

Working in parallel to improvements, the duo was devising new game concepts and increasing their offline and online footprint. By December 2016, they launched their sixth game, Shifu Cosmos.

After successfully placing the products across several online and offline channels throughout India, like Amazon, Flipkart, Hamleys, Babyoye to name a few, PlayShifu forayed into the US through Amazon.

Dinesh and Vivek have been friends for more than a decade now. They both were in the same class at IIT KGP, and then worked together in P&G for more than three years.

The core tech team got together mostly by meeting people in the circle and working together for some time. By the time the first product of Shifu was launched, the team had nine people.

Since the core of PlayShifu’s products is focussed on children in their formative ages, the games have a physical prompt like flashcards, and when viewed through the companion Shifu app, the flashcards come to life.

These live 3D models on the mobile or tablet screen are interactive and children get to lead their playtime rather than the other way round. The puzzles, activities, and vocabulary building games are immersive and the company has specially designed them after a feedback loop from the parents and children themselves.

Part of the games is carefully chosen sounds and description text that is relevant and useful for kids while they are playing.

“Orboot was born when one fine evening we were reminiscing our childhood and discussing the games we played outdoors and indoors, like cycling, playing hide and seek or the all-time favourite Snakes and Ladders. In that discussion, popped up the good old globe which we all owned in our childhood and is probably biting the dust now. With our belief of making it a favourite again, we zeroed in on for resurrection through augmented reality.”

Orboot is a 10-inch globe that highlights every country in the world. The globe works with a smartphone or tablet through a companion app. It is a factual and creative representation of the world.

Orboot covers extensive details across eight categories spanning cultures, inventions, monuments, natural wonders, maps, weather, cuisines, and animals for all the countries of the world. It has hundreds of detailed 3D models, amazing voiceovers, and local flavours of music, which gives an immersive experience to both kids and adults.

The world of AR and VR

It is now passé to say that AR and VR are the next big thing. Globally, the market is expected to exceed a whopping $165 billion by 2024 and is seeing a growth of 80.8 percent. Added to this, the toys and games market is projected to exceed $135 billion, thanks to innovation in technology.

In the US, there already are several players like Chromeville, Atlanta AR Design, Mitchlehan Media, Baibuk, and others. Play Shifu is one of the few in India. Currently, it has three products in the pipeline and it plans to increase its portfolio to 25 by the end of 2017.