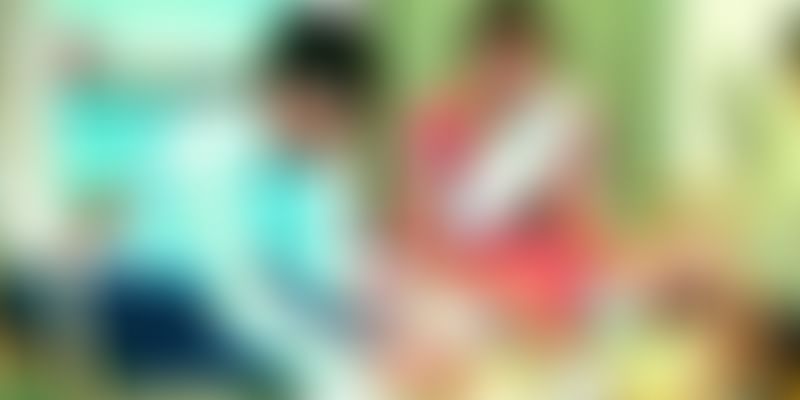 V Subba Rao, who sells samosa for a living in KPHB Colony of Hyderabad, is ecstatic. Subba Rao's son Mohan Abhyas, who took the entrance examination for IIT has made his clan happy by securing an All India Rank of 64.

Subba Rao and Surya Kala, the parents of the star child, shifted to Hyderabad from Bhimavaram of West Godavari district of Andhra Pradesh 13 years ago, in search of jobs. They now live in a small two-room house in KPHB Colony of Hyderabad. Right across their lane, the family runs a samosa cart with a tiny shed. Surya Kala and her mother, being experts at making samosas, prepare them at home while Subba Rao fries them and sells them in the streets, on his bicycle.

With a massive score of 310 out of 366, Abhyas has realised the literal meaning of his name. 'Abhyas' comes from 'Akshara Abhyasa', a traditional Hindu ceremony, which is about a child's first steps of learning towards formal education. Abhyas has an All India rank six in the JEE Mains and has come first in South India. Abhyas also has the first position in Andhra Pradesh Engineering, Agriculture, and Medical Common Entrance Test (AP EAMCET) and he ranked fifth in the Telangana State EAMCET.

My son has secured 64th rank in this year’s Joint Entrance Examination (JEE) Advanced and has topped JEE mains. People are coming home every now and then to congratulate him. So, we are making extra samosas,

says his father Subba Rao in a chat with The News Minute.

Despite his achievement, Abhyas is apologetic for not helping his family make samosas, as he was busy studying for the past two years. He used to start studying at 7 am every day and would go on till late night. Because he couldn't concentrate much at home, he sought permission from his school Narayana Junior College to stay on campus beyond the study hours, to prepare for the examination.

In an interview with FirstPost, Abhyas said,

Till two years ago, I would help my parents by doing the filling in the samosas, but for the last couple of years, I was not able to.

According to a report by The News Minute, Abhyas said,

For the past two years, I stopped playing cricket. Though I am not too good at the game, it is my favourite hobby. I used to play every day for six hours. But, in the past two years I hardly touched my cricket bat. When tired of studies, I would watch a movie rather than play, so that I did not waste too much time

I did not get very great marks in my 10th board. I was disappointed, but my parents were happy with the marks. I felt guilty that they were doing so much for our education. So, I started working extra hard.

I have not decided the branch yet. But I surely want to become a scientist. I want to create new things and learn something new every day. This is just the first step, and there will be more difficulties. I am going to work even harder so that I can take over responsibility for my family.

Until his 10th standard education, Abhyas always helped his family with the making of samosas. He humbly says that it is his duty to help his family in every way possible, for all the hard work and sacrifices his parents made for him and his sister.

Speaking with FirstPost, the ecstatic and absolutely deserving Abhyas said,

I don't know swimming but I want to buy a swimsuit this evening. We are planning to go to a water park tomorrow.