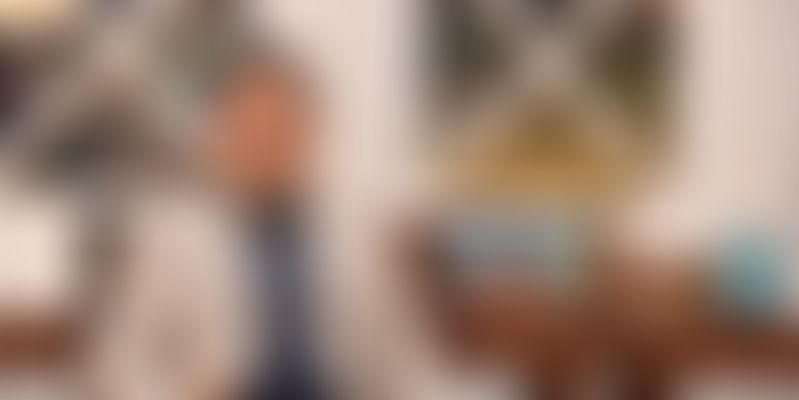 This author’s story is the stuff dreams are made of. Famously rejected by 20-odd publishers, banker Amish Tripathi stuck to his guns and decided to self-publish his first one. Seven years and five books later, he believes that it’s important to focus on what you can do and not get frustrated over what you can’t.

The man who made Shiva cool is now giving Sita, depicted as the demure and obedient wife of Ram in most texts, a fresh perspective. And there’s plenty more churn coming up in the world of Indian mythology, promises Amish Tripathi.

If the best-selling author of the Shiva Trilogy has his way, he should be occupied writing novels for the the next 20-25 years.

“I left clues in the Shiva Trilogy. I have ideas for many books,” Amish says, adding that he might even interpret the Mahabharata in his own way and consider writing on Parashurama, one of the avatars of Vishnu.

Amish has clearly come a long way from his days as a banker. He graduated in math from St. Xavier’s College, Mumbai, got an MBA from IIM Calcutta, and went on to work in financial services for the next 14 years. Books weren’t even a blip on his horizon back then as he was more reader than writer. And a banker, of course.

“There is no dishonour in being a banker, at least in India. We weren’t as bad as the western bankers. And that’s because we have a strong and stricter regulator,” jokes Amish.

While banking was never his calling, Amish says it was a job that allowed him to meet responsibilities and lead a great lifestyle. “For many of us who do not come from certain strata of society, these jobs are life-transforming,” he points out.

How did he traverse the long distance from banks to books? Sitting at his office in suburban Mumbai, Amish says banking was a well-paying job and there was no reason for him to make a career change. But a chance conversation at home changed all that.

What really is evil?

Amish, the grandson of a Sanskrit scholar and pandit in Varanasi, says mythology was a part of dinner-table conversations at home. When watching TV one day, his family got into a discussion that while Hindu mythology refers to gods as devas and terms demons asuras, Zoroastrian culture does the exact opposite.

“We got into an interesting thesis that if the ancient Indians and the ancient Persians had met, they would call each other evil. And who would be right? The answer is neither, because it is their way of life, and evil is something that goes beyond this. And I got to thinking that if evil is above human rivalries, what is evil?” Amish says.

This led to the Shiva Trilogy. But the first book, The Immortals of Meluha, was actually born as a philosophy thesis. It soon grew into a three-part series, spawning a craze across India. In the first three months of publishing, The Immortals of Meluha sold over 45,000 copies. Till date, the book he started writing out of his love for mythology has sold over 3.5 million copies and is the subject of a much-awaited film.

But the making of Meluha wasn’t easy. The manuscript was famously rejected by 20-odd publishers and Amish received a slew of advice. He was told “There isn’t a market for mythology,” and that he should “write a story on IIM Calcutta,” or “consider a love story”.

But Amish decided not to toe the line.

The thin line between bravery and stupidity

“Often, the line between bravery and stupidity is a thin one. I didn’t know any better and I didn’t care if the book did well or not. I was just focused on doing the best I could. I self-published,” Amish says.

And there was no looking back.

His latest book Sita, Warrior of Mithila, was released in May this year and is riding high on the best-seller charts. The book is the second instalment of the five-part Ramachandra series.

Amish’s portrayal of Sita in his book is different from the idea most of us have grown up with. Gayatri Jayaraman in her review in News18 says: “It would be a crying shame to dismiss this as just another work of mythological fiction. It is transformative.”

Amish feels his interpretation of Sita and understanding of the goddess is very different.

“Most people’s idea of Sita’s character is from the regressive 1980s TV show. But in essence, she was a very strong character and warrior. She was the only person other than Rama to be able to lift Shiva’s Pinaka bow. Ravana was able to capture her because she was overpowered by several other warriors,” Amish says.

It is that kind of detail that has helped Amish bring mythology alive for a whole new generation of readers. His writings span 9,000 years and focus on the Vedic race, its creation, culture and subsequent destruction in the Mahabharata war.

In hindsight, Amish says it has become fashionable for people to believe that they are disconnected from mythology and culture. Citing the example of a 1,500-year-old play by the great playwright Kalidasa, Amish says that even in that play, the father complains about his son and how disconnected he is.

“Everyone is interested in their culture; they just want to approach it with their own thoughts, ideas and visions. The core may be the same but the way you look at it will be different,” he says, adding that one needs to respect different takes and ideologies.

And like any IIM graduate worth his salt, Amish says the first thing he did was plan his writing. He read several other books to research and understand how to write. The journey was easier thanks to the the support of his family.

When he actually started writing The Immortals of Meluha, he realised that the story was taking surprising turns. As he sat in his writing space at home, Amish realised that many of his characters were not following his original character sketches.

He remembers how one of the characters was originally written as a fun and jovial person, but in the book he came across as a tormented sould, pining for his mother.

“Whenever I would write his scenes I would start crying because I would desperately try (to make him) like the initial character sketch. But whatever I did seemed like a forced fit and wasn’t flowing organically with the story. I got so frustrated that I stopped writing,” he says.

His wife, Preeti Vyas, advised him to “surrender to the story”.

“She said ‘Don’t write the story with the arrogance of a creator, write it with the humility of a witness. And write the way it comes to you.’ And that is the way I still write. So I sometimes still get shocked by the way a character is behaving,” he says.

The whole writing process was cathartic for Amish, and the once-stressed banker says his books gave him a different perspective on life.

“I realised that I needed to focus on what I could do and on what I couldn’t. It is important not to get frustrated over what you cannot control,” he says.

But despite being rejected by multiple publishers, he continued to believe that there would always be a way.

“This is like Indian mythology where there is never a simplistic answer or truth. Things and relationships are complex because life is complex,” he says.

He may be known for his mythological fiction, but Amish is also writing his first non-fiction book, a compilation of his thoughts, articles and speeches on the challenges that India is facing.

But his love for fiction remains paramount.

“Like I said, I already have plans for several stories. I just need to find a way to write them fast because I need to finish them before I get too old to carry on,” Amish laughs.