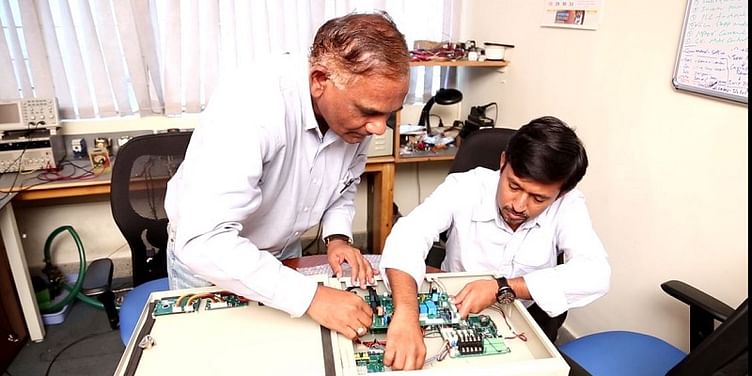 The Indian farmer, sadly, features more in grim headlines than in stories of innovation. Historically and traditionally, India has been an agrarian economy, with the sector now contributing 17 percent to the national GDP. Even today, over 58 percent of households depend on it for their livelihood. But drought, poor infrastructure, and lack of dependable labour have resulted in poor yield year after year. One of the biggest challenges is irrigation, especially for small farmers who use drip or sprinkler systems, particularly when water is seen as an increasingly finite and precious resource.

This innovation has the emotionally vested interest of Channabasappa Kolar, born into an agrarian family and who has seen his community’s heartache as they strive to coax the arid land to yield. His job at Wipro led him to collaborate with his long-term associate, HS Vijayeendra, to find a technology-led solution and the duo founded Avanijal Agri Automation in September 2013.

They leveraged their extensive technological experience to design IoT/connectivity technology with which farmers can control the flow of water, even from their homes, using a mobile app. No more trudging to the farm at all sorts of odd hours to switch off the valve or motor. Instead, this innovation enables farmers to easily irrigate or fertigate their land, obviating over- or under-irrigation.

Vijayeendra, Director at Avanijal, says the product, developed with an investment of Rs 25 lakh, took them nearly three years to develop and market it. “We decided to use Bluetooth and smartphones to manage smart irrigation controllers for sensor data collection and to control the irrigation motors and valves. We’ve had four installations since going to market in mid-2016. Our customers are farmers with open land or greenhouses, who primarily cultivate flowers, vegetables, and so on. It is very early in the game for us and we should have some concrete numbers by end of this financial year.”

The technology—priced between Rs 35,000 and Rs 90,000 depending on the features—is designed to save water, labour and electricity. It can even be shared by farmers owning adjacent patches of land. Before installing the system, the Avanijal team surveys the area to assess the farmer’s requirement. Once it is set up, the farmer downloads the Nikash app to an Android phone and schedules the irrigation timings. Once programmed, Nikash takes charge. When electricity supply is available, the irrigation controller checks the voltage stability and automatically switches on the motor as scheduled. While irrigation is on, the fertiliser delivery is also activated if it is scheduled for that zone and in that time period

Once the irrigation is complete for a given section of the land, Nikash opens the valve for other sections automatically. At the end of the schedule, irrigation stops for the day. This continues daily till the farmer reschedules the programme according to the crop’s needs. The controller supports a wide spectrum of wired and wireless valve/sensor connections and irrigation resolutions: from a few seconds to several hours. “With its help, farmers can irrigate based on time, volume of water or soil moisture. And, if there is a power outage in between, the duration or the volume of water is compensated,” adds Vijayeendra.

Avanijal is constantly looking to improve its product technology and Qualcomm is working closely with the venture, providing them with access to both hardware and software resources. As one of eight shortlisted companies for Cycle 1 of the Qualcomm Design in India Challenge 2017, the duo is leveraging Qualcomm’s BluetoothLE and CSRMesh technology as part of its product and solution.

Vijayeendra told YourStory, “Our experience working with the Qualcomm Innovation Lab has been great. Right from our early interaction prior to the pitch, where we learned about QDIC, and the help we have got post-selection in terms of quickly engaging in providing the technology inputs, we have had strong support from the Qualcomm team. We felt that signing up for QDIC would help us access the technology, and being selected as finalists would validate our idea and give us visibility. Their technology has helped us improve our product and made it easier for the customer to adopt it.”

India’s agri-startup market is growing at a rapid pace with the emergence of entities such as AgroStar, Kisan Raja and so on. In such a scenario, Avanijal faces tough competition from both Indian and global brands.

But, as Vijayeendra points out, “In India, we have very few competitors and they offer only basic features. Global companies have products that offer the best irrigation features, but many are not useful to Indian farmers as they are not supported and are quite expensive and unaffordable.”

He believes that what sets Nikash apart is its affordability. Moreover, he claims, none of the competitors’ products have safety and protection features like voltage monitoring, and motor and valve protection, pipeline protection and the like.

“Our controllers work on both three-phase AC from mains with a wide voltage range of 175V to 575V or on generators. They also work on DC from a solar panel with voltage ranging from 250V to 500V. Another key and frugal innovation feature is that up to four farmers with adjacent land can share the same controller and this can bring down the cost of ownership further,” he explains.

Currently in use in Karnataka, Vijayeendra plans to expand their footprint across south India in Telangana, Andhra Pradesh, and Kerala, and then to the rest of the country. Avanijal also aims to expand its product categories. “We can see that farmers are open to adopting new technology though they take time to decide to spend. But if we look at the future, scarcity of water, electricity and dependable agriculture labour will push them towards automation in a big way.”