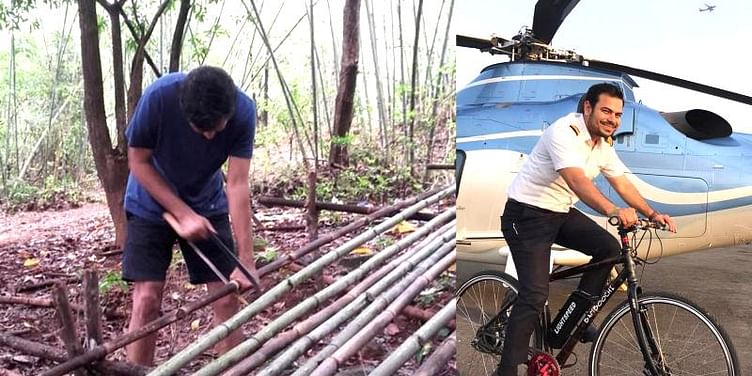 Capt. Shashishekhar Pathak’s line of custom-made bicycles made from bamboo, Bamboochi, is driving ahead the concept of ‘Made in India’.

In 2012–13, about 12 million bicycles were sold in India. Growing with a moderate rate of about six percent, bicycle sales in the country is surging every year. In addition to taking up bicycle as a mode of transport, people in India are opting to ride it for fitness and health.

While most bicycles in India are manufactured from tubes made of standard metal, a bamboo frame is a novel concept. Foraying into the field of eco-friendly bicycles, made from bamboo for a growing bicycle market in the country, is Capt. Shashishekhar Pathak from Mumbai.

Flying an aeroplane to riding a bicycle

The concept of migrating to cities in search of jobs and better income is not unknown. While most people strive to find jobs in cities, Capt. Shashishekhar began thinking of establishing an enterprise in a village, which could contribute towards reverse migration and help local people procure livelihoods right at home.

After retiring as a squadron leader for Indian Air Force and having worked as a commercial pilot for 17 years, Capt. Shashishekhar purchased a piece of land few years ago, about 70 km south of Pune. In the Bhor Taluk of the Pune district, bamboo and paddy serve as the main sources of livelihood for the local people. As the two crops are seasonal, the youth are forced to look for jobs in the cities of Pune or Mumbai.

Upon being approached by the local people for helping them find a job in the city, Capt. Shashishekhar began thinking of doing his bit to make them self-sustainable. Achieving self-sustainability by using the local resources available was the biggest challenge, and out of it was born the idea of making bicycles from bamboo — a practice which is followed in countries such as Columbia.

Initially, I decided to make a cycle for myself. Since I haven’t studied engineering, it took me nearly two years to complete my first project, as I had to balance between my regular work and my passion for building this bicycle. After the roll-out of the prototype in 2014, my wife and a few friends motivated me to continue working on it. We had given a lot of thought to what we would name the project, and one day my wife suggested that we should simply call it 'Bamboochi,’ which means ‘made out of bamboo’ in Marathi, says Capt. Shashishekhar.

“The locals in the Bhor Taluk have been growing bamboos for generations and they assured me of its strength. I learned lot from them about how to grow and season the bamboo. Along with the local people, we grow our own bamboo now, thereby giving them employment. Also, I design all required parts myself,” says Capt. Shashishekhar.

Agreeing with general speculation, Capt. Shashishekhar says that bamboo and carbon fibre are surprisingly similar materials and the acceleration and efficiency of bicycles made from both the materials are very similar. Bamboo helps to traverse with ease, and accelerates and sprints like the best carbon bikes, he assures.

Choosing the right quality bamboo is very important. We grow bamboo best suited for cycles, indigenous to the region, locally known as ‘Mesh’. This bamboo has excellent strength to weight ratio and helps me keep overall weight of frame up to 2 kg, says Capt. Shashishekhar.

There's a lot of misconception regarding the durability of bamboo. Capt. Shashishekhar explains that what we imagine as garden stakes and decorative bamboo should not be associated in the same way as construction grade bamboo for construction and frame building. “Sourcing, drying and picking out the right variety of bamboo will dictate the kind of product that you are making. To ensure better impact, scratch resistance and low brittleness of the bamboo tubes, they are sourced from high density and thicker walled bamboo varieties,” he adds.

Bamboochi has come up with seven different types of frames so far. Capt. Shashishekhar builds and fabricates each of these custom-made bicycles; for instance, the handmade bamboo bike custom-made for city biking is made to resist the rain and the terrain of the city roads. These bike frames are priced at Rs 25,000 and the total cost depends on customer’s choice of other components like drive train, wheels, or the front fork. We insist on quality components for the bicycle so the rider enjoys the uniqueness of Bamboochi. Bamboochi frame is with three years warranty against natural and manufacturing flaws.

eBamboochi is a Bamboochi with electric peddle assist kit fitted with a battery, hub motor and control panel with associated wiring. This kit has been manufactured by Lightspeed Bikes based in Ahmedabad. On one charge, it gives approximately 70 km of run in city conditions. Electric kit comes with three-year warranty and is priced at Rs 30,000 and Rs 35,000for 250 KW and 350 KW motor.

“As of now, the product is marketed only on social media and through word of mouth publicity. People, who understand the unique quality of bamboo, are eager to buy this product. We have also starting making other functional and low-cost products like bamboo planters, gift articles, etc., with the aim to provide livelihood for the local youth. This is the beginning of a long and interesting journey,” says Capt. Shashishekhar.

Till date, Capt. Shashishekhar has manufactured and sold seven customised bikes. To buy his products, customers can connect with him on social media platforms.