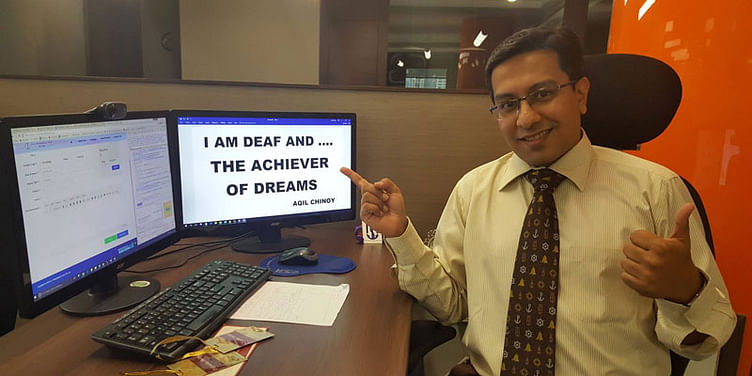 Instead of trying to get them to hear or fit into what is perceived to be a largely able world, Inspiralive aims at empowering and creating an inclusive workforce for people having hearing loss.

In a distant ideal world, the people with hearing impairment would stand out for individuality and not their disability. But in the current scenario, lack of access to information and communication is what curtails this section the most. Inspiralive has set out to bridge this chasm by not only generating employment for the hearing-impaired but also by giving both the masses and the disabled an opportunity to learn Indian Sign Language (ISL) and break the language barrier.

Born with hearing impairment to a couple who had the same disability, Aqil Chinoy (39) is Founder and CEO of Inspiralive, a website development firm that employs hearing-impaired professionals coming from various fields in Mumbai.

With a general population of about one billion, India has an estimated deaf population that runs into millions. Going by the dated 2011 census on disability, of 70 million people with disabilities, 18 percent are hearing-impaired. With a huge number as this, the facilities and opportunities to make life easier for the hearing-impaired is only growing bleaker. Most feel isolated in many ways. Aqil’s parents, too, having endured tough times in India due to inadequate accessibility for people with disabilities, were determined to ensure Aqil wouldn't face the same.

Aqil was sent to Gallaudet University, the only university for the hearing-impaired in the US. Here, he was exposed to a host of opportunities lacking in India. Having achieved a bachelor's degree in Computer Science and Information System, along with several awards, Aqil returned to his motherland. “I returned bringing all the skills and rich experiences with me, despite knowing the fact that the accessibility of services in India for the deaf are very limited compared to the US,” he says.

After employment at A.S.Moloobhoy Pvt. Ltd, the sales and service provider of marine equipment across India, Aqil discovered his passion and strength. “My passion is anything to do with computers – no matter how challenging or tedious, big or small, I will accomplish them successfully, because in work I see no handicap,” he adds.

With a strong zest to transform conditions and make an impact in the lives of hearing-impaired persons, Aqil and his brother, Bilal, who is disabled too, as freelancers, developed websites, logos, advertisements for non-profit organisations and companies working with persons with hearing impairment. “By observing that there are several deaf people in India who are facing difficulties with employment, we discussed about giving them the opportunities to work with us and prove that deaf people are not to be undermined,” Aqil says.

To this end, Inspiralive was launched in January 2014. After the firm's steady growth, it was made formal and registered under the Shop and Establishment Act in January 2016.

Most of the money earned by Inspiralive is given as charitable contributions to individuals with hearing impairment, orphans and the underprivileged.

“We focus mainly on spreading awareness about the deaf and building accessibility for them. Most successful deaf businessmen I encountered in India are ones who inherit companies from their forefathers. The deaf individuals who started their firms from the scratch are very few in number.”

Aqil believes the key is to build confidence in order to have more startups employing and being run by hearing-impaired individuals in India. According to him, Inspiralive exists to show that is possible and to transmit that confidence to others needing it.

In all its years of existence, Inspiralive has worked with several organisations that work on initiatives for hearing impaired people in the country as well as in the US and Denmark. Working with Mook Badhir Mandal, Association of the Deaf at Vadodara, Inspiralive made its most revolutionary impact by developing the ISL dictionary website.

Vocabulary can be translated into ISL with the help of definitions, and ISL videos are displayed on the site. Likewise, there is a children’s version of ISL with basic ABC finger spelling. On the same website, there are several news updates, encyclopaedia and health awareness articles that are also narrated in ISL. Therefore, this visually-interactive website is very valuable for educational accessibility of the hearing-impaired people, since most of them are deprived of a proper method of education in their early childhood.

Inspiralive also played an active role in National Association of the Deaf (NAD), in its mission to pass the ‘Rights of Persons with Disabilities.’ They developed the NAD website, which has proven to be a powerful accessibility tool for the hearing impaired, with written information portrayed in ISL. Also, the navigation menu items are in form of animated GIFs developed by the team. For his actions and dedication, Aqil was elected the Vice President of NAD in April 2017.

At the moment, Inspiralive is working on developing a website for Yuva Association of the Deaf (YAD) with the goal of ensuring that hearing-impaired youth are given proper access to education and awareness.

Though what maybe one of the quietest firms in India, their ideas and achievements have made a resounding impact. Through these attempts and endeavours Inspiralive has reached out to over 30,000 hearing-impaired individuals so far.

Working towards a comprehensive country

Aqil, a recipient of the NCPEDP Mphasis Universal Design Award this year, aspires to improve the accessibility, in terms of appropriate technology developed to ensure that hearing-impaired people have equal access to information and communication.

“I hope to convince the Indian government to consider the provision of accessibility for the deaf, such as setting up of closed captions in every TV channel, provision of sign language interpreters in public services, video relay services to enable deaf to make phone calls, flashing lights in lieu of ringing phone/doorbells, emergency alarm etc” he says.

Since news on television channels do not come with closed captions for every spoken word, Aqil has started working with a company in establishing daily news updates in sign language along with planning stages of organizing The Deaf Expo for promotion of awareness on deafness.

Ending on a note expressing the desire to inspire the disabled and make them feel alive, Inspiralive urges everyone to learn ISL and build a bridge between themselves and individuals with hearing impairment.