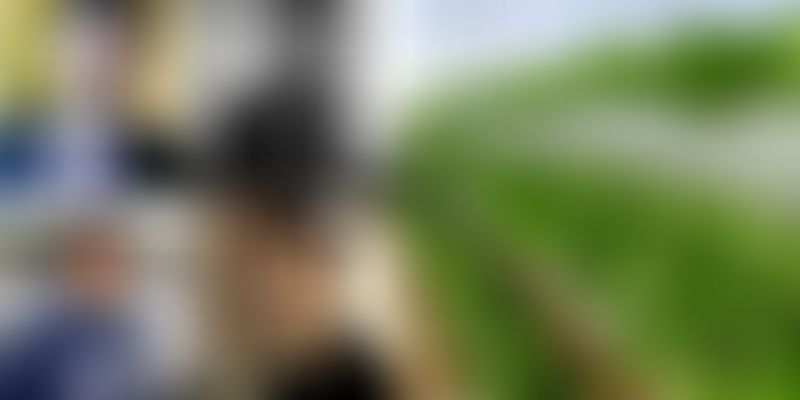 Foraying into urban farming, a group of friends have set up a green enterprise that is based on hydroponics.

There is growing concern in urban and semi-urban areas about the dangers of the pesticide-ridden food that is sold in the market.

Following the Green Revolution in the mid-1960s, the use of pesticides in India has increased. Although the period saw the boom in agriculture like never before, the flip side of this revolution has left the country consuming poisonous food. Food production in large quantities at the cost of their health has made people wary and look for alternatives.

In the confines of an urban setting, four youngsters from Delhi are venturing into hydroponics to provide an organic and healthier option for the urban populace.

Hydroponics is the method of growing plants in a water-based, nutrient-rich medium, without the use of soil. This method essentially cuts down the amount of water being used compared to the method in which plants are grown in soil. In some cases, up to 90 percent less water is used in the hydroponics method compared to the traditional soil-based agriculture — a boon for water-starved urban areas. One can plant four times the number of crops in the same space as soil farming.

An experiment in urban farming

Triton Foodworks started as an experiment in urban farming in the September of 2014 by four friends — Deepak Kukreja, Dhruv Khanna, Ullas Samrat, and Devanshu Shivnani.

In early 2014, Ullas was exploring ways to develop his agricultural land in Mohali for his mother, who suffers from ILD, a degenerative disorder of the lungs. When the doctors told him that life on a farmhouse would in fact be counterintuitive for his mother due to dust and other issues related to farming, he became obsessed with finding a way to farm in a clean and hygienic manner.

Dhruv, who was in Singapore at the moment working on his tech startup, wanted to come back to India and start something here. On a catch-up call, the two got discussing how much fun it would be to start a business together; especially something that made sense economically and ecologically. Following a lot of research, they zeroed in on hydroponic farming, something that connected with both of them. Dhruv visited a few hydroponic farms in Singapore to see firsthand how it works. Ullas met Deepak online while researching on hydroponics. The team quickly realised that to make this thing big, they needed a formal structure and a financial disciple — which is when Devanshu was roped in.

“We were just a bunch of friends who wanted to do something in the space of food and agriculture. We were very excited by the opportunities of rooftop farming and farming within the limits of the city. We did a pilot to grow strawberries in Sainik Farm of Delhi. We used an open system with vertical towers to grow eight tonnes of strawberries out of 500 sqm of land. Eventually, we decided against setting rooftop farms due to feasibility issues. Instead, we set up full scale, commercial farms in the outskirts of cities,” says 38-year-old Deepak, technical Co-founder, who takes care of the farming aspect of the business.

Like any bootstrapped startup, Triton Foodworks also faced a huge number of issues at every step. Their farm at the Sainik Farm was demolished by the Municipal Corporation of Delhi (MCD) because the team refused to pay a bribe.

“We went to the Delhi government to ask for some sort of help in setting up farms in Delhi; we were called ‘food terrorists’ to our face. Quite a few vendors still owe us money for our early projects, something which is a huge issue in this industry. We had no previous data to map our progress against, no previous players who could be used as a yardstick in the field,” says 27-year-old Devanshu, who takes care of the finances and the financial modelling for the business.

If your wish is the farmer’s command, what happens when you wish wrong?

Dropping out of his MBA to become an organic farmer, this 24-year-old is lifting farmers out of debt

“Toxic food is the biggest issue we are trying to resolve. People don't realise how toxic their food really is. We don't use chemical pesticides for our plants. The second issue is the fact that we are running out of land and water to grow food. Lastly, we are addressing the problem of traceability, consistency and, by extension, accountability in farming. You buy a bag of chips and you can trace it back to the field in which the potatoes were grown, but if you pick up a tomato from your vegetable vendor, there is no way to know where it came from, who harvested it, when was it harvested, and what all did he put in it to grow. We are teaching people to ask these questions by offering them answers even before they realise this information is important,” says 27-year-old Dhruv, who looks after operations and marketing.

The team relies on Ayurvedic recipes and bio control to fight off pests and other infections, as an alternative to pesticides and insecticides. The team grows the same amount of food grown under conventional farming with just about one-eighth of the area and using 80 percent less water.

The team has successfully set up more than 5 acres of hydroponic farms across three locations in India. The strawberry farm in Mahabaleshwar grows 20 tonnes of strawberries a year and a 1.25 acres facility in Wada district of Maharashtra that produces about 400 tonnes of tomatoes, 150 tonnes of cucumbers, 400 heads of spinach, and over 700 bunches of mint.

Triton also operates an acre facility in Shirval, Pune that grows tomatoes and cucumbers, which are used to feed farmers' markets in Pune. The team also advises companies in Hyderabad, Manesar and Bengaluru that are interested in incorporating hydroponics.

Triton currently has over 200,000 sqft of area under hydroponic cultivation in various locations in the country. Using hydroponics, it produces more than 700 tonnes of residue-free fruits and vegetables every year.

“Our systems enable us to save around 22 crore litres of water per year as compared to traditional agriculture. In terms of volume, our vertical systems grow food comparable to 10,00,000 sqft of land when using traditional agriculture methods, which translates into a saving of more than 800,000 sqft of land to grow the same amount of food. Since our farms are located within a 100-km radius from cities, our produce carries lesser food miles,” says 27-year-old Ullas.

The team is currently in the process of setting up stalls in farmers' markets in Pune and Mumbai.