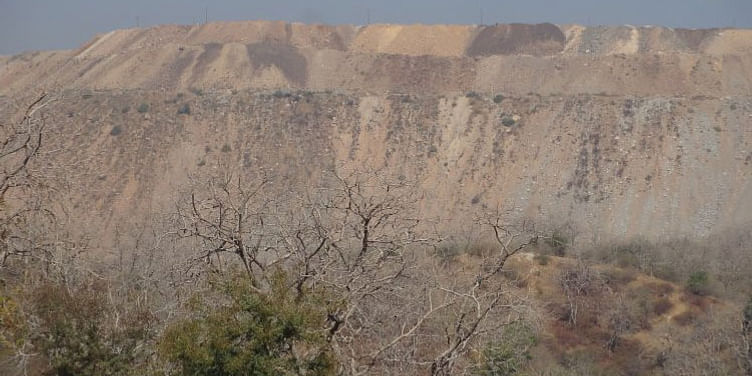 Pollution from the Jhamarkotra mines poses a threat to waters near and far, and also causes severe health issues in the miners. Why is there no post facto environment impact assessment?

Huddled in the Aravali range in the southern part of Rajasthan about 26 km from Udaipur, is the largest reserve of phosphate in India. Also known as the Jhamarkotra mines, it is the only commercially exploitable rock phosphate deposit in the country. Phosphate is crucial for the sustenance of fertilizer plants but is available here only between 380 and 600 m below ground level, which can only be reached through deep excavation. The phosphate reserves came up for digging in 1968 when the Rajasthan State Mines and Mineral (RSMM) Corporation initiated open cast mining in the area. The mine, which covers an area of 18.44 sqkm and is divided into eleven blocks, contains approximately 74.68 metric tons of rock phosphate. The land was acquired in the late 1960s and then prepared for mining.

Rama Phosphate at Umarda village was the first fertilizer factory to be set up in 1998 near the mine but seven other factories followed suit. Since then, the environment around has deteriorated and heaps of overburden (waste), barren open lands and felled trees are now characteristics of what was once a forest or cropland.

Typically, phosphate, clay, sand and trace elements are extracted together from the mine. Then, the material is dumped into a pit in the form of a pile, which is technically referred to as ‘matrix’. This matrix is then blasted with high pressure water and the slurry obtained thereafter is processed in a plant called the beneficiation plant. This is where the ore is separated into desirable mineral and unusable waste. Dust and exhaust emissions are by-products of the beneficiation process. After processing, the slurry is dumped into a tailing dam. Many a times, the tailing dam acts as a settling pond and lets the water evaporate. In Jhamarkotra, the slurry is placed in the Bhekda tailing dam, a 50-metre-high dam made of concrete.

Tribal communities such as the Bhils, Meenas and Gharasias dwell in scattered hamlets in the area. They say that the tailing dam is completely filled with silt and the water spills, which is not so surprising. According to a study in the area by Jagdish Purohit of SPWD, an NGO which studied the issue, "polluted water normally leaks out through many cracks in the dam’s wall. The base spread area of the dam is porous because of which polluted water contaminates the fresh groundwater of nearby areas. Villagers are experiencing harmful effects of the polluted water. People witnessed immediate death of many monkeys after drinking polluted water and there have been cases of abortion in some other animals. There is a fear that the harmful water may spread through the river to various areas and may create pollution in Jaisamand lake in the coming years". (1)

Link between fluoride and phosphate

Pankaj Paliwal of Jagaran Jan Vikas Samiti, a local NGO, says that there is a strong link between fluoride and phosphate since the mining waste is mixed in the area's groundwater. This point is also corroborated by a study on Jhamarkotra mines, which notes that "water analysis from eight points of delivery in the mine area along with pathological and biochemical parameters indicates that the water is relatively hard and has a significantly high content of fluoride and chloride. The miners were divided into four groups on the basis of their exposure in the mining area. Regarding health impacts, the study states that “serum uric acid, GPT, alkaline phosphatase level was elevated in directly exposed miners". (2)

The deep excavation to extract phosphate results in colossal amounts of waste. In fact, the ratio of waste overburden to phosphate ore extracted in Jhamarkotra is close to 19 times. Also, groundwater is present in abundance in these phosphates bearing rocks. Typically, the mine has to be dewatered so that the water in the pit does not get in the way of mining. Deep borewells are drilled in the mine and heavy pumping continues. This water is a major source of drinking water supply to Udaipur. Locals say that because these are deep waters, they are devoid of phosphate. However, the effluents from the beneficiation plant are discharged into a stream that meets the Jhamri River, which in turn flows into the Jaisamand reservoir that caters to most of Udaipur’s drinking water needs. In other words, the degraded waters are re-routed to Udaipur.

Not many in Udaipur are aware that this could have adverse health impacts. As per a study of the water chemistry and sediment core samples from Udaisagar lake in Udaipur, "the lake waters have high phosphate contents. Such a situation is developing due to the discharge of pollutants from phosphorite mines, chemical factories, distillery, sewage and domestic waste from settlements, hotels throughout the length of Ahar river. This renders the water unhygienic for human consumption and is deleterious to aquatic life". (3)

Back in Jhamarkotra, the water removal rate is very high and has led to a decline in the groundwater table in the villages nearby according to Laxmilal of Hanuman Van Vikas Samiti, an NGO working in the area. The deep groundwater so lost is difficult to replace. According to a study, "the accumulated groundwater is certainly not recent rainwater which has directly infiltrated underground. A great deal of research is needed to clearly understand the mode of occurrence and identify the recharge basin of groundwater in agricultural land and mining areas" (3). Studies have also shown adverse effects on springs. Owing to the mines, "natural springs stop flowing because of the change in landscape caused by deep excavation and dumping of overburden material disturbing the surface and underground drainage network" (4).

There is also a general drying of the river Jhamri because of the mine dewatering. A study indicates that "the (underground) base flow is diverted towards the deep mines affecting the flow of the river. Also, less flow in the river has affected the yield of wells in the sample villages at varying intensity" (4).

Ganesh Purohit of Jagaran Jan Vikas Samiti questions "why, despite the knowledge of the adverse health impacts, has the Rajasthan State Mines and Mineral Corporation not taken action so far?” He says that all the efforts to galvanise people’s institutions to face up to the issue legally has met with failure due to threats from the company. It’s high time that a post facto environment impact assessment is done and adequate measures are taken to safeguard the health of the people and the environment.

(1) Jagdish Kumar Purohit, Growth in Jaisamand Catchment: A disconnect between ecology and ‘development’, in Forest and common land acquisition: Estimated forecast and lessons of case studies from 6 States, Society for Promotion of Wastelands Development and Rights and Resources Initiative, New Delhi, 2012

(3) B K Das, Environmental pollution of Udaisagar lake and impact of phosphate mine, Udaipur, Rajasthan, India