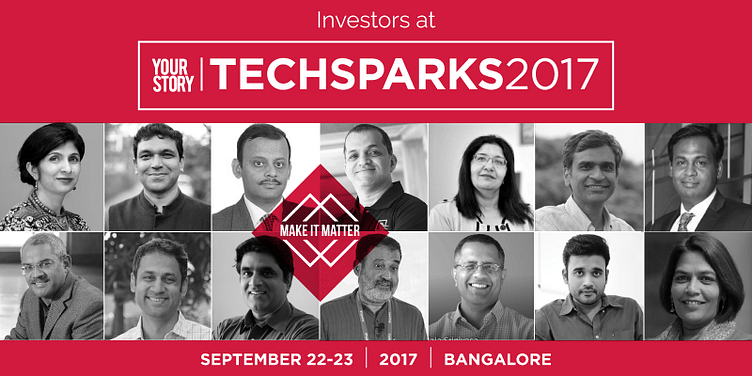 Every savvy entrepreneur knows that the right investors bring more than their worth in capital infusion; they provide much-needed mentoring required to run and successfully scale up a business. They open the right doors and make the best introductions to networks you need to tap into. So, if you’ve been struggling for the opportunity to make that right connection, look no further than TechSparks 2017.

As India’s oldest and largest tech entrepreneurship summit, TechSparks has been attracting the biggest names in the startup ecosystem since it started out in 2010. This is where the best names meet and share information, showcase their products, and collaborate to build the next great disruptor.

TechSparks 2017, being held on September 22-23, in Bengaluru, will draw over 2,000 delegates and industry experts including serial entrepreneurs, stalwart CEOs, and angel investors and venture capitalists. Book your tickets now at half price with the code TS17EXCLUSIVE100 here!

Here’s just a sneak peek at whom you will find at the event. Impress them and you could be on the road to making your startup dreams come true.

The 22-year Silicon Valley veteran is currently Managing Director at Kalaari Capital. She returned to India in 2006, and started Kalaari to help first-time Indian entrepreneurs evolve their businesses into global players. Focussing mainly on tech startups operating in e-commerce, mobile services, education, and healthcare, she is known in VC circles for identifying emerging startups and mentoring them into high-growth enterprises. The startups she has supported through Kalaari Capital read like the power list of the ecosystem and include names like Myntra, CureFit, Apps Daily, Urban Ladder, Zivame, Snapdeal, Power2SME and Bluestone. Vani Kola also serves as an advisor or board member to several of the companies she has invested in. (See disclaimer.)

Bala is a Partner at Kalaari Capital. He currently focuses on fintech, digital media, supply chains and innovation in B2B markets. He is on the boards of Credit Vidya, Jumbotail, Rubique, Affordplan, Active.ai, Scoop Whoop, Mettl, and Instamojo.

Bala started his career as an equity analyst in the US, where he covered the enterprise software space. After that, he served on the management teams of two successful analytics firms where he handled sales, marketing, and product management. Prior to joining Kalaari, Bala was MD at Amba Research which he helped scale to a global analytics provider that was eventually acquired by Moody’s Corp in 2013.

Karthik Reddy co-founded venture firm Blume Ventures, where he is Managing Partner, in 2011 to bridge the gap between angel investors and managers of $100 million-plus funds in India. He identified this gap in the Indian venture capital industry while investing in startups through the Mumbai Angels Network while he was at Brand Capital (Times Group). With over 15 years of experience in finance, investment banking, technology and operations, Karthik focuses on early-stage tech-focussed and tech-enabled startups. Blume Ventures believes in a collaborative approach to investing and has made over 100 investments in 77 companies, including Unacademy, Chillr, Dunzo, Ola, HealthifyMe, Mech Mocha, Botmetric, and Runnr.

Parag Dhol entered the Indian venture capital industry way back in 1993 with ICICI Ventures, before ‘startup’ was a buzzword. Since 2008, he has been Managing Director at Inventus Capital Partners and serves on the Board at FundsIndia, Vizury, Power2SME, PolicyBazaar, eDreams, Avaz, Peel Works, and Tricog. Prior to Inventus, he served as Vice President at GE Equity and Associate Director at Intel Capital. Inventus Capital Partners has financed over 120 companies in India and the US including RedBus, PolicyBazaar, eDreams Edusoft, Vizury, Tricog, Motivo, and Unboxd.

Sanjay Swamy, Managing Partner at Prime Venture Partners, has spent most of his career as an entrepreneur building hugely successful companies like Ezetap Mobile Solutions and mCheck. A self-proclaimed financial services fanatic with several years of experience in India and Silicon Valley, he specialises in mobile content and commerce, media, CRM, and eProcurement. He also played a prominent role in the UIDAI project under the leadership of Nandan Nilekani.

Prime Venture Partners is a seed-stage venture fund that provides startups with capital, and mentors them so that  they can become industry-leading disruptive companies. Their portfolio includes startups like NiYO, KredX, Maya, HackerEarth, Nimble, SmartOwner, and Happay.

As Founder of Stellaris Venture Partners, Rahul Chowdhri primarily invests in technology companies operating in the retail, education, content, and payments markets. He spent over eight years at Helion Ventures as Partner where he invested in startups like ShopClues, BigBasket, Toppr, Simplilearn, and Livspace. He has also worked in product management and consulting roles at Microsoft, MarketRx, i2 Technologies and BCG.

Mohandas Pai wears many hats with ease, including that of co-founder and Chairman of Aarin Capital. He holds pivotal roles at Manipal Global Education Services, The Akshaya Patra Foundation, National Stock Exchange of India, Havells India, and CSIR-Tech. A supporter of the IT services industry, he is one of India's most prolific angel investors, particularly in the areas of education, IT, e-commerce, health care, and human resource development.

Aarin Capital is a stage-agnostic investment fund that supports its investee companies from incubation to exit through separate investment and operating teams. Its portfolio includes BYJU's, Counsyl, Zoomcar, Praxify, Vyome Biosciences, and Licious.

A venture partner at Seedfund, Sanjay Anandaram has close to three decades of experience as an IT industry executive, entrepreneur, startup mentor, investment advisor, and venture capitalist. A Charter Member at TiE, he co-chairs the Entrepreneur Acceleration Programme and serves as an advisor to iSpirit, Ideaspring Capital, Endiya Partners, and Ojas Venture Partners. He was also a founding partner at JumpStartUp—a VC firm that invests in tech startups in India and the US.

Padmaja Ruparel has played an active role in India's VC industry. She kickstarted the first TiE chapter in India (the most successful in the world for the last four years), revived the Indian Venture Capital Association, and, perhaps most importantly, co-founded the Indian Angel Network (IAN), the country’s very first angel investment network, and the largest in Asia. IAN has a portfolio of over 135 companies spread across seven countries and 18 sectors.

A serial entrepreneur with decades of first-hand experience in creating and running startups, Bala's most recent venture is MoneyTap, an app-based personal line of credit for consumers, of which he is CEO. Before starting Prime Ventures, Bala started three successful startups including Snapfish which was acquired by Hewlett-Packard in 2005. Given his vast experience in the American and Indian startup ecosystems, he is adept at identifying promising startup trends and has invested several companies operating in the areas of mobile payments, e-commerce, and tablet/smartphone-based apps.

One of Flipkart’s earliest employees, Ankit Nagori made a splash in the Indian startup ecosystem when he rapidly rose through the e-commerce startup's ranks to become the Chief Business Officer in 2015. Along with Mukesh Bansal, Co-founder of Myntra, he co-founded CureFit in 2016, which has since become the most recognised health and fitness brand in India. Ankit has also made personal investments in fashion rental platform Blinge and bike taxi platform Rapido.

Bharti Jacob, Managing Partner at Seedfund, has decades of experience in venture investing, marketing and financial services. Since starting Seedfund in 2006, she has invested in 35 companies, across diverse sectors, including RedBus, Edusports, Jeeves, and AxisRooms among others. Prior to SeedFund, she was a partner at Infinity Ventures and served as head of the investment bank Lazard in South India.

Naganand Doraswami, co-founder and Managing Director of Ideaspring Capital, spent years in the startup ecosystem as a serial entrepreneur before turning to venture capital. He has served as the President of TiE Bangalore, and is currently a board member at Lavelle Networks, ScienceAdda, and Zapty. He is also an active member of IAN. At Ideaspring Capital, Naganand focusses on deep tech companies. Started through a collaboration between Naganand and Mohandas Pai, Ideaspring makes seed, pre-Series A, and Series A investments in a limited number of companies. Their portfolio currently comprises Lavelle Networks, Zapty, Whoddat, and Karomi Smart Solutions.

Until recently, Karthee served as Managing Director of Qualcomm Ventures, investing in mobile, cloud, semiconductors, internet, consumer devices and services, healthcare, automotive and retail sectors. He has invested across US, India and Israel and built Qualcomm Ventures’ presence and team in Israel and India. He has served on the boards of companies like Waze (acquired by Google), Validity (acquired by Synaptics), Capillary Technologies, Portea, MayMyIndia and YourStory Media, among others. Karthee’s entrepreneurial and professional networks span Silicon Valley, southern California, India, Israel, and Southeast Asia.

Can you imagine another opportunity to meet all these opportunity makers on a single platform? Then, don’t waste another minute and book your tickets to TechSparks 2017 before they run out.

Disclaimer: Kalaari Capital and Mohandas Pai are investors in YourStory. Karthee Madasamy was part of Qualcomm Ventures at the time it invested in YourStory.