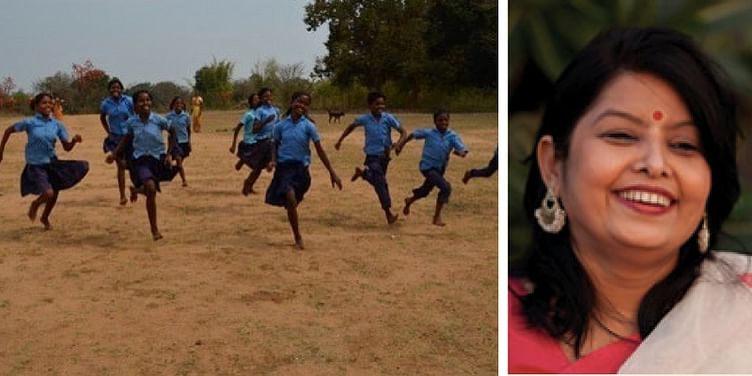 The Aahan Foundation is bringing a new dawn in the lives of tribal girls and women at risk of gender-based violence, trafficking and child marriage in Jharkhand. Through their effort and hard work, these women are moving towards a life of freedom and self-respect.

There has been an exponential rise in incidences related to the trafficking of tribal girls. As there exists a huge disparity between the official and unofficial reports, there is no authentic source to rely on. Considering the statistics related to the Jharkhand region, CID reports suggest a mere 282 cases of human trafficking between 2001-2013, while the unofficial record puts it at well above 40,000. As per the NCRB report, trafficking has increased by 110 percent last year.

Tribal girls are the worst-affected as they often have to make a difficult choice between death due to hunger and survival through trafficking.

Many parents in Jharkhand celebrate the birth of girl child as she can be sold or sent off to big cities as domestic help by the age of eight, where her childhood is mutilated in ways beyond imagination.

This is where Aahan steps in, transforming lives of tribal women by imparting entrepreneurial skills, creating local livelihood programmes, and enabling community development.

Rashmi Tiwari (45) recalls that at the age of nine, the only luxury she knew was a 60W light bulb in a 3.5 m x 5.5 m house. The house was her drawing room, bedroom and kitchen until she earned her master’s degree.

“I was a posthumous child and my mother had to work as a daily wage labourer to help us survive. I spent a significant part of my life in Varanasi.”

Although she had to fight discrimination and stigma at every turn of her life, Rashmi says that nothing could hold her back. “I distinctly remember that I gave up the scholarship meant for girl students coming from financially weaker sections, when I was in class seven. Though I knew what the reality was, I never believed I was weak or vulnerable. Instead of taking the scholarship, which would have tagged me and my mother “poor”, I decided to protect my self-respect and earn school books and clothes by showing my dance and mimicry skills to the senior girl students.”

Hunger, poverty and discrimination made her stronger; she never chose to seek sympathy. With a latent desire to work in the social sector after her US State Department-Fortune mentorship programme in the USA, Rashmi began searching for her calling. The turning point came when she met a tribal family of four in a small village of Orissa. “The family had very little food to survive on. While I was interacting with the mother of the three girls, I expressed my desire to speak with her other daughters as well. She said that she could only call one girl at a time, as there was only one set of decent clothes that her three daughters shared.”

Witnessing this, Rashmi was taken back to her days of struggle and hardship. She saw tribal girls, as young as seven years of age, being brought to Delhi and sold off as domestic help who had to work for 18-20 hours in miserable conditions. Rashmi realised that her calling was to help tribal people and she decided to start Aahan Tribal Development Foundation. She began working with tribal girls in 2011 and founded Aahan in 2013.

The challenges of working in the tribal regions of Jharkhand were unending. Geographic inaccessibility was one of the biggest barriers —primitive tribal groups reside in extremely remote regions devoid of even basic infrastructure like toilets, electricity, and roads. Naxalites, who are the biggest internal security threat, actively oppose any development activities in many of these tribal regions. Their frequent combing operations continue to delay the pace of activities at Aahan.

Shedding light on another hurdle, Rashmi says, “It is extremely difficult to earn the trust of the people as they do not understand our language. Besides, not much information is available on the vast majority of tribal areas in India as they are not covered by media or research bodies. Under these circumstances, it is imperative to find somebody in the tribal areas who not only understands our language but also has an intention to help us in starting the community development work.”

Tribals are eons away from reaping the fruits of progressing human civilisation. A lot of initiatives by the government to help improve their situation have been marred by corruption and unscrupulous agents. However, there is a silver lining, according to Rashmi. “My assessment of tribal girls is that they are endowed with grit, determination and an acute desire to move forward. They not only want to live a good life but also want their community to prosper. Aahan Foundation taps these qualities and tries to make them leaders by changing their mindset and belief systems.”

Rashmi, together with her business partner from a journalism background, forged a network of journalists who helped in getting a foothold in the tribal locations by connecting Aahan with local leaders and communicating their vision.

Today, the foundation, started single-handedly through Rashmi’s personal funds, has its head office in Delhi with a member team and three centres in Jharkhand. With gradual growth, Aahan received funds from friends and well-wishers. They still remain their major source of finance besides crowdfunding and money through awards.

Aahan works with a S.M.A.R.T. community model to holistically deal with the issues of tribal girls and women. It interacts with the Sarpanch, Media, Authority, Religious Leaders and Tribal Families to bring in change.

Some of their notable achievements include the Aahan Fellowship for Tribal Girls and Women, a yearlong leadership programme, and Udaan, a week-long programme where exceptional tribal girls and women are given an opportunity to meet political, social and business leaders in New Delhi.

They also have a Village Level Mentoring Programme, Global Tribal Mentoring Walk and Aahan Football Team among others.

A dream to increase impact

Operating through a volunteer model of over 100 girls volunteering for each project at a time, Aahan had reached 50 villages supporting around 5,000 tribal girls working in locations like the Chandwa block, in Latehar District, Jauna village in Ranchi and various other places Khoonti, Lapung and Garwa.

“Our strength are Aahan Bravehearts — tribal girls who are part of our network. They are the ones who conceptualise, plan, implement all our initiatives. I believe that the change must come from within the society rather than outside,” says Rashmi.

Aahan plans to extend its work to around 150 villages by the first quarter of 2019. By undertaking a series of projects such as the year-long Aahan Fellowhip Programme, that includes a 1-minute video documenting the hardships these girls in Jharkhand have faced, Aahan aims to create a unique community of girls in the government-run schools.

“Our Fellowship programme provides fellowship to tribal girl/ women who have survived gender-based violence and have the courage to not just change their lives but also the lives of other girls in their villages.” Through these on-round initiatives, Aahan shall be reaching out to approximately 20,000 girls and women in the next two years.

To create a bigger impact, the foundation seeks to expand its football team, start secondhand shops urging tribal mothers to sell recycled clothes and reusable sanitary pads among other materials, and initiate a programme for handicapped tribal girls and boys.

Encouraging the nation to pay attention to this section, Rashmi says,

“It's sad to learn that the enormous potential of tribal girls is being ruthlessly destroyed by the greed of traffickers. Rough figures suggest that as much as 70 percent of the girls trafficked in India are tribals. It is time we wake up to this grim reality and do something to include our tribal brethren in Bharat's growth story.”