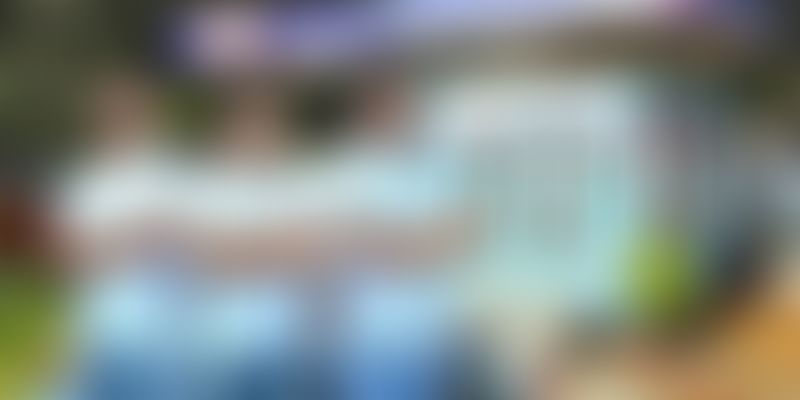 Think startup and visuals of smart young ones busy tapping into fancy laptops come to mind, but the reality here could not be more different.

The premises of Entropy Innovations are filled with the sounds of welding machines and grinds and clangs of heavy machinery. For three years now, this manufacturing startup, which calls the Mittal Industrial Estate in Mumbai’s Marol suburb home, has been busy ensuring squeaky clean motorbikes with its unique bike washing machine - Express Bike Works.

To top that, it offers all the pegs to interest a journalist - two successful years in operations, 36 stores spread across six countries, and a profitable exit to investor ah! Ventures.

Entropy Innovations has taken on several engineering projects with the Central Railways and Bhabha Atomic Research Centre, but it is the EBW that holds the founders’ affections.

When Entropy Innovations started operations in 2013, founders Niraj Taksande, Raghavendra Bhushan Karn and Jigar Vora rented a small garage with a table and chair from home. Being avid motorcyclists themselves, the trio had faced difficulty getting their vehicles cleaned, which was the core idea for the business.

Niraj, an MBA graduate from IIM Indore, and Raghavendra, who is better known as Bhushan, had studied at IIT Bombay, have been friends since childhood. With a shared love for machines and gadgets, the latter got in Jigar, his friend from IIT, to complete the trio. Initially, they envisioned building a garage with a coffee shop, but since the idea didn’t seem scalable, they decided on building bike cleaning machinery.

The three pooled in Rs 3.5 lakh each, and initially thought of opening their own shop. Soon, however, they realised it would be better to reach out to OEMs (original equipment manufacturers).

“It helped us build the first prototype. Since we were in and around the manufacturing hub, it was simpler to reach out to multiple vendors for lathe machine experts, welders and other manufacturers. We had created the designs, and took help of people around (for the manufacturing),” explains Niraj. The first working prototype took close to 10 months.

Reiteration was not easy in manufacturing. The design to prototype phase went through several runs and reruns, which was expensive.

After the prototype was built, the team sought out friends and family for funding. “Since Jigar was from a purely financial background, he would look after that bit,” explains Niraj. They got their first funding from Neeraj Garg, ex-Vice President at Tata Motors, in April 2014.

The team went on to test the prototype to ascertain if it worked at the commercial stage. That is when they realised the core technology – the touchless wash that needed a specific kind of pump – had to go through several iterations.

The team raised investment from ah! Ventures, along with Mark Mobius, Executive Chairman of Templeton Emerging Markets, and AdvantEdge Incubator in June 2015. The company bought out all its investors in November last year.

“The company was getting profitable and we got a friends and family round that gave us an opportunity to give ah! Ventures an exit,” explains Niraj.

The first test for the team was from a Honda Service Centre and Niraj says it came out richer from the experience as it threw up real-life scenarios. With the service centre, the team had to ensure it was on its toes, and the get the machine actually working.

Niraj adds the team learnt everything from business modelling, to working of the machine, to the speed that it needs to work at in a service centre, with Honda.

Over the last four years, Express Bike Works’ bike washing prototype has gone through several changes. “In the first prototype, we would have some form of glitch every three or four days. Now, the product functions seamlessly for months,” adds Jigar.

The team says the core proposition was to ensure that one gets a clean bike.

The prototype was simple, had no doors and splashed water everywhere. “We were just focussed on giving a clean motorcycle. When we pitched it to service centres, we realised it was important that the person operating the machine had control. That’s when we added a human interface screen, that kept a count of the number of washes done in a day, worked more on the life of the machine,” explains Niraj.

The team realised manufacturing of the product wasn’t the challenge, but designing and re-designing was. They interviewed over 200 people to find that one perfect engineer to help design the product. The team today has four designers.

Today, the team claims the EBW machine is capable of cleaning the dirtiest of bikes and scooters within two to five minutes. It also has an inbuilt water recycling unit that ensures lesser wastage of water.

“Furthermore, there is zero water or oil spillage and EBW uses biodegradable solvents for washing. Also, the price for a wash at EBW is equal to the amount one would spend at any local bike wash centre and that too in lesser time,” adds Niraj.

EBW has a mobile app, which gives an OEM the accounting of motorcycles washed, the time taken and managing of the washes. The company’s first paying customer was a Hero service centre, are remain EBW’s customers.

Today, the assembly of all the parts is done in-house, while parts are manufactured by different vendors. The machine is priced at Rs 10 lakh, and the team claims to export it to Indonesia, Columbia, Nepal and countries in Africa.

Competitors for the company include Cleanse Solutions, which builds bike cleaning centres. The company, however, works primarily on a B2C model.

“With the first product of Entropy Innovations being successful and working across different products, we now are looking to take on more engineering design and concept related projects. And focus on deeper R&D work,” explains Niraj.