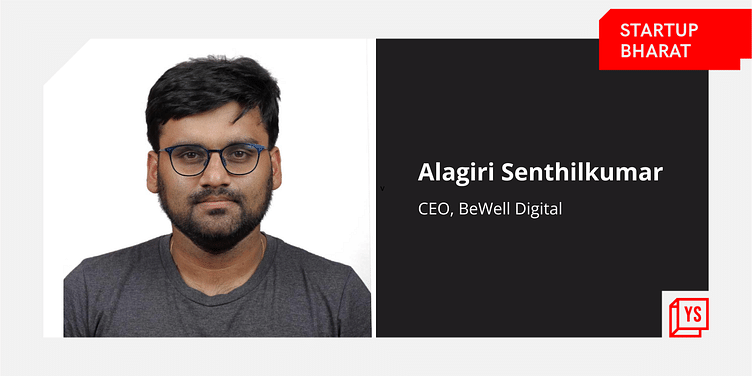 BeWell Digital is a Coimbatore-registered startup, which operates a digital platform for radiologists that helps doctors read reports anywhere at any time.

Alagiri Senthilkumar and his wife, a doctor by profession, were expecting a baby when they relocated to Canada. The couple had to undergo tremendous stress during childbirth due to high blood pressure, but eventually, returned home from the hospital with the mother and baby safe.

The traumatic experience made Alagiri decide to start a healthtech venture that would have a positive impact on patient care, like digitising patients’ health information and making it interoperable.

“When I realised this is the idea to go after, and the one big thing that we wanted to achieve in our life, I called my friend Vishnu Vardhana Balu to ask if he would join me in building the business,” says Alagiri.

Alagiri and Vishnu then approached American technology startup accelerator, Y Combinator, with the idea, and got instantly accepted into their W21 batch, which incidentally saw its largest group of Indian startups - 43. After the Y Combinator acceptance, Alagiri and his wife renounced their Canadian Permanent Residency (PR) to come back and register the business in Coimbatore, India.

﻿BeWell Digital﻿, founded in 2021 by Alagiri and Vishnu, is a digital platform specifically for radiologists to read patient reports anywhere at any time, instead of having to go to the hospital in person to read the reports.

When the founders first applied to Y Combinator, they planned to start a business around internet clinics and digital hospitals. Nevertheless, six months after Y Combinator's Demo Day in March 2021, Alagiri and Vishnu stumbled upon a gap in the teleradiology segment, and decided to pursue it in September 2021.

BeWell Digital’s software democratises the entire working system of radiologists by enabling them to work anywhere anytime, and still be able to deliver the same care as they are used to delivering from hospitals or scan centres.

“With our software, doctors can report from vacation places or even report in the middle of the night if there's an emergency case in the hospital,” says Alagiri.

“We are making radiologists' lives better, and enabling faster and more effective treatments using our software,” he adds.

Apart from the facility to report from anywhere, Alagiri adds that his product helps doctors read more reports in a given time, thereby increasing dollar revenues. Additionally, the cloud-based software facilitates hospitals to adhere to medico-legal compliance norms necessitating storing of medical records for a patient’s lifetime or seven years.

“Even if there is a medical legal case, they need not worry about looking for data thanks to this electronic health record. Infact, it is one less trouble for the hospital administration,” claims Alagiri.

“Last but not least, our software can also be used for research purposes,” adds Alagiri.

Citing an example, he says if a radiologist is researching liver abscesses, a simple search can help bring up all the health records stored within a hospital with liver abscesses, which will help derive more insights.

Alagiri admits the only factor they see as a disadvantage at this point is the high dependency on  internet.

“We are addressing that problem by building a hybrid model where even if the internet is down, we are able to go to a backup server which is available in the local environment of the particular hospital or scan centre and tunnel the request to them,” Alagiri says.

The making of the product

A software change in hospitals can be extremely daunting as it deals with highly confidential personal information. This makes many hospitals balk at the thought of moving from legacy systems to more modern ways.

BeWell Digital tackled this issue by ensuring they partnered with hospitals and doctors to not only provide that sense of trust but also to establish that the software is easy to work with.

The startup worked with its first client, City Hospital in Dindigul, to understand their specific needs and then built a product to suit it. It then worked with various other hospitals and doctors to upgrade the software based on their feedback.

BeWell Digital has onboarded 22 hospitals in Tamil Nadu and Karnataka so far, and it has 15 pilots ongoing where it works with a hospital for seven days on a trial basis so the latter can test out the software.

Being backed by Y Combinator

On the Y Combinator experience, Alagiri says, “Personally, I feel Y Combinator alters the DNA of every startup in a very good way. It gives us a playbook which we can use, which is a good thing because we then know how startups usually fail and the mistakes that we need to avoid.”

Alagiri adds that one of the biggest success mantras of Y Combinator is the character of a cohort. The accelerator chooses ambitious startups at different life stages, and being amidst this mixed bag of ambitious entrepreneurs allows various startups to learn and push forward.

Incidentally, BeWell Digital is from the same batch of YCombinator as quick commerce startup Zepto.

BeWell Digital is a 10-member team currently. Its software is built in-house by its 5-member strong technology team.

Both Alagiri and Vishnu are software engineers from PSG College of Technology. Alagiri, who holds the CEO title, has previously worked as a product manager with Zenefits, a Silicon Valley -based HR-tech company.

Vishnu, who is the CTO at BeWell Digital, was a senior full stack architect with IPAOO, a website builder platform. Alagiri describes his co-founder as an engineer at heart with an ability to build products at speed and scale.

The startup raised an undisclosed amount in seed round in 2021 from angel investors.

The pandemic has seen many shifts happening in every sector, with digitisation being at the forefront. Hospital managements have increasingly realised the need for digitisation of health records.

“This is where Cloud plays a vital role,” says Alagiri.

The radiology market has an overall total addressable market (TAM) of around $5 billion, according to Alagiri. He adds the startup's current focus is to tap this potentially huge market until a certain threshold has been reached. The startup is also gearing up to raise another round of capital in the next three to four months.

BeWell Digital competes with other startups in the radiology space like Meddiff, and Medsynaptic.

According to a report by Data Bridge Market Research, the healthcare information technology (IT) market is expected to witness a 23.85 percent market growth in the forecast period of 2022 to 2029.