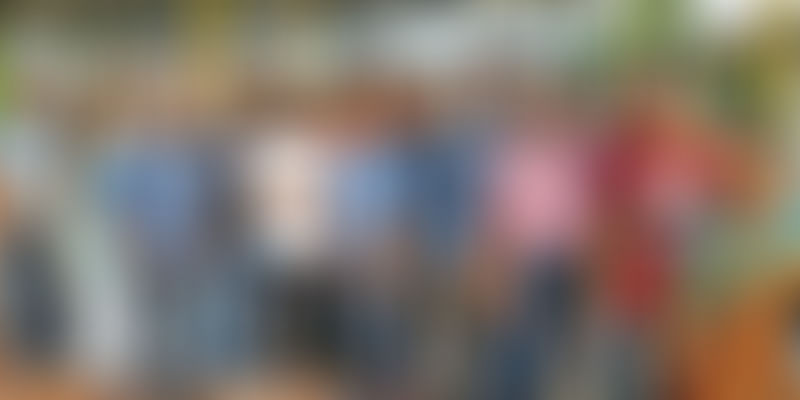 Typeset.io, a writing platform that allows authors to communicate their research effectively, on Monday announced that it had raised a pre-series A round of $850K. The funding comes from Haresh Chawla, a partner at True North (India Value Fund), in his personal capacity. He had initially invested an undisclosed amount in the venture in 2015 and has now made a follow-up investment.

Typeset.io's long-term goal is to be a single platform for researchers to collect, write, build and submit research to any journal. The investment will be used to expand the platform's features across the research communication workflow. YourStory spoke to the founders to learn more about their story.

“Research is what enables scientific progress. But the tools that researchers are forced to use today do not allow them to express their knowledge effectively,” says Saikiran Chandha, CEO and Co-founder of Typeset.io. “Typically an author has to use four-to-five different tools to collect, write, format, collaborate and submit their research paper to his or her target journal. The experience is fragmented.”

Saikiran elaborates that millions of researchers submit their manuscript to science journals for publishing every year. But they have less than 10 percent chance of getting published because authors have to battle lack of research-specific writing tools, tedious guidelines, and fuzzy submission procedures.

Saikiran also experienced this problem firsthand. As an undergraduate student, he came across the problem of formatting research while writing his thesis. His university had sent a guidelines document on how the thesis should be formatted. Sai spent many hours formatting it and finally submitted his thesis. The same process was repeated after a few months later when he had to submit it to a science journal.Also, co-authors generally collaborated by emailing Microsoft Word documents back and forth with "Track Changes” and "Comments” layered on top of each other. Saikiran recalls,

I got frustrated with the entire process and reached out to my peers and friends studying around the world. Everyone had the same problem and people were complaining.

With a vision to build a better way to write research papers and collaborate on documents, Saikiran quit his job to build on this idea.

At AngelHack Bangalore, Saikiran and a friend built the first prototype of Typeset.io. They then went on to win AngelHack Global Demo Day at San Francisco. Saikiran was also chosen to attend Stanford University’s Ignite, an innovation programme, in 2015. Through this experience, Saikiran met his Co-founder, Shanu Kumar, who had had graduated from IIT Kharagpur in 2013 and previously been a part of Ignite. He said,

Shanu, who wrote research papers in his full-time job at the time, immediately understood the importance of the building the product. We started working on building the team and product immediately.

In the two years since inception, the team has grown to 25 members and comprises people from universities and organisations around the world, including IIT, IIM, NUS, Stanford, Flipkart etc.

After more than 15 months of research and development and beta testing, the platform went live in mid-2017. Saikiran says within three months of their public launch, about 11,000 researchers from 103 countries are writing on the platform. Talking about their current traction, he claims,

We are adding nearly 5,000 users per month, and at the moment our users are completing 120+ academic papers per week on the platform, with almost 95 percent new users coming via word of mouth.

The problem statement and how Typeset.io works

Based on their personal experience and by talking to early testers, the Typeset.io team realised that an author generally has to go through an average of 20 steps to get their paper submitted; this is even before peer review. The other main pain points include formatting content to the target journal’s specific guidelines, which can run to hundreds of pages. So the Typeset team worked on this problem from first principles. Shanu, the CTO, explains,

We started by creating a Universal Manuscript Editor for researchers. This intelligent editor brings down the formatting effort down to zero. Authors can write their content on the platform and in a click get their paper formatted to any research Journal’s guidelines.

Typeset presently has over 28,000 intelligent journal builders and is adding more. Shanu says their aim is to cover all journals by December 2017. He elaborates that the underlying technology could be used on an array of other documents, where compliance to formatting rules is mandatory. While students and researchers are the main target market currently, Saikiran noted that they had got interest from the lawyer community, who also face similar challenges like formatting and different guidelines.

2. They can then pick the stage they are at- ideation, planning, writing or formatting.

3. All research-related tools are included in one place to allow researchers to focus on writing and communicating their research. An online collaboration tool to share research paper with co-authors and reviewers, allows authors to track all comments and changes at one place.

4. In the last step, the Universal Journal Builder formats any content to any journal’s authoring guidelines to let the researcher submit the document for review.

Talking about why he invested in Typeset, Haresh, partner at True North, says:

The writing experience is broken for all research products on the web. Existing players undervalue the merits of a good authorship experience. The consumption experience on the web is yet another problem as most publishers just put up static HTML pages. With powerful web technologies, this experience can be better. Typeset team has understood this problem well and are providing a great user experience, which is critical in capturing this market.

Typeset currently offers three plans, which range from a freemium version with limited features to a premium version priced at $24 per month. Saikiran noted that their marketing efforts have been mainly organic and through word of mouth.  Talking about their user base, he remarks,

Our users come from major organisations such as CERN, NASA, ETH Zurich, Stanford, MIT etc. We also have students from top universities using the platform for writing theses and assignments. Within a week of launch, we had paying users. We charge a fee from publishers to put their formats on the platform. We are also selling B2B licenses to universities.

Academic publishing has been profoundly affected by a plethora of innovations that have shaped the way scientific knowledge is produced, evaluated and disseminated, according to a report by Springer. The report notes that services such as SSRN, Google Scholar, ResearchGate, Academia.edu, Mendeley and Open Access journals are only the visible tips of the iceberg. Innovations are happening at the infrastructural and strategy levels.

According to STM, the the global scientific publishing market is pegged at $25 billion. Some of the popular players in this space include Authorea, ShareLaTeX, Overleaf, LyX, Microsoft-word and Google docs.

Talking about the sector, Saikiran notes,

Authorea, ShareLaTeX, Lyx and Overleaf require users to learn LaTeX and are not user-friendly. Microsoft Word and Google Docs are not built for research content creation and thus lack critical features such as auto-formatting, structured-XML output and journal templates. Also, none of the competitors provide end-to-end workflow integration such as peer review, reference library and single-click submissions.

About 36 percent of published articles currently come from the United States, so Typeset aims to setup an office there in the near future. Saikiran also says they see tremendous growth potential in markets like Korea, China and Egypt. Going forward the team aims to expand to a headcount of 33 from their current strength of 25. In terms of product development, Typeset.io aims to add features such as a plagiarism checker and a workspace management tool for collating research-related information.