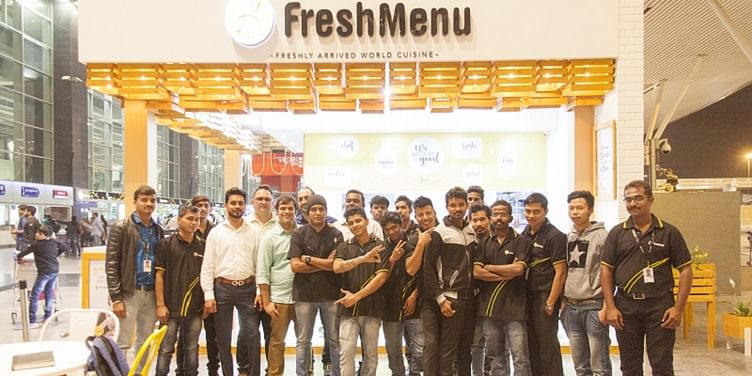 FreshMenu has launched its first physical outlet at Bengaluru Airport. Do they intend to open more?

As I walk bleary-eyed into the Bengaluru International Airport, I am welcomed by the usual rush and haggle of equally sleepy and bleary-eyed travellers.

The refreshing smells of coffee and tea assure to take away the last vestiges of sleep, but this time there is a fresher and newer kid on the block. Among the different food kiosks that promise a quick and yet satisfying bite to weary travellers, there is a bright yellow, white and black FreshMenu stall.

“It is interesting to have variety and choices at an airport, especially for food. And especially during these ungodly hours. FreshMenu’s offerings do look quick and interesting, I would definitely like to try something at some time,” says a 34-year old marketing executive at the Bengaluru International Airport.

For those unaware, FreshMenu is a Bengaluru-based cloud kitchen restaurant. Until this October, the foodtech startup was purely internet-based, and had a presence across 10 cities in the country.

Foodtech startups cornered $217 million in funding across 32 deals in the first half of 2017. While FreshMenu has not raised funding this year--it had raised around $17 million in 2016--it has not only survived the foodtech bloodbath but is now coming up with new ways to become a go-to option for diners with a new online menu every day for customers in Bengaluru, Delhi and Mumbai. With the launch of this new outlet, are they planning to open other outlets?

“No!” says Rashmi Daga, Founder and CEO, FreshMenu, in a conversation with YourStory.

“Airports are different. The volume of travellers are higher and there is a constant demand for good food on the go. It is was a strategic call for us. If FreshMenu wants to become real, and wants to get closer to the customer somewhere, airport looks like the best choice to be there,” says Rashmi.

Getting closer to the customer

The menu at the airport kiosk is representative of the company's online offerings. The prices are, however, slightly higher with a plated meal at an average price of Rs 300. Also, the offerings are slightly more different, with more options for plated meals, and well-plated desserts.

“It’s slightly different, and we are working to get it closer to people who want to grab a quick bite on the move,” says Rashmi.

In three years, FreshMenu has grown to 27 kitchens: 18 in Bengaluru, 5 in Mumbai and 4 in Delhi/NCR. Its staff of 550 members and 700 delivery personnel (hired through an agency) together fulfil about 12,000 orders every day.

The team might not be looking at opening physical outlets at the moment in different parts of the city, but it might open outlets at different airports. Rashmi adds that with learnings from Bengaluru, it will be easier to replicate the same across different city airports.

The prepped food materials come from the FreshMenu kitchen at Jakkur, and meals are freshly prepared at the kiosk. Rashmi adds that the cost of setting up the kiosk is similar to that of setting up a central kitchen.

It is no surprise then, that FreshMenu is looking at airports to open a kiosk. According to an IBEF report, close to 265 million passengers passed through Indian airports last year. And this number is said to touch 300 million by 2018.

To top this, Bengaluru, Mumbai, Delhi, Chennai, Hyderabad and Kolkata are believed to handle close to two-thirds of the country’s air traffic. Bengaluru is believed to have received over 2.9 million passengers last year, and the airport is slated to touch 20 million in the next three years.

A Financial Times report says the average time spent at an airport is 133 minutes. The report also said time taken for security and check-ins have reduced, and the remaining time of average 30 minutes is left for shopping and eating.

Now, with Swiggy also looking to venture into the cloud kitchen business, the airport outlet for FreshMenu looks like their differentiating factor.