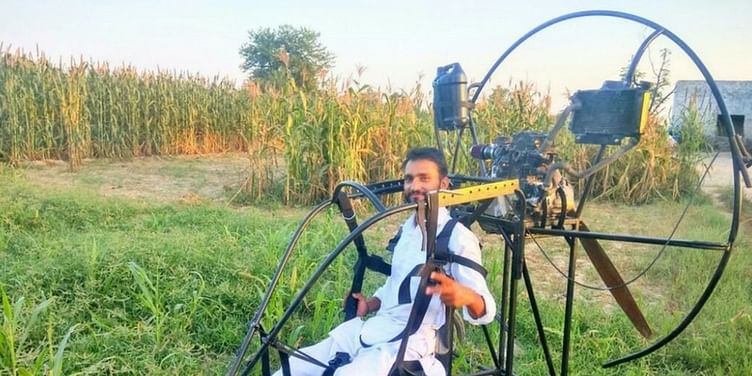 There is no dearth of talent in India and the inspiring stories we keep hearing every day remind us of just that. Hailing from Hisar district in Haryana, Kuldeep Taak has built an ultralight aircraft using the engine of an old bike. Having completed his bachelor's in technology from Chandigarh, he has built a machine which can run for 12 minutes on only one litre of petrol.

Kuldeep, a resident of Adampur town in Hisar, has invested nearly Rs 2.5 lakh in this invention which is being compared with a mini helicopter or paragliding flying machine.

The mini aircraft, which has been fitted with a 200cc engine, wooden wings, and small tires for ease in landing, can reach a height of nearly 10,000 feet.

Kuldeep credits his family for the success of this project. He was motivated throughout by his father Prahlad Singh Taak and friend Satish Aryanagar.

Prahlad said that his son would work day and night to develop the aircraft. Although there were many occasions when he asked Kuldeep to give up on his endeavour, he went about his work undeterred.

Kuldeep has received pilot training from Goa to fly his machine. After three months of training, he went back to focusing all his energy on fulfilling his dream.

This is not the first time Kuldeep has attempted to build a flying machine. His previous attempt was completely damaged during its trial phase and that was when he decided on his current invention.

Kuldeep’s family is extremely happy with their son’s success in fulfilling his dream. His mother Kamla says that seeing her son flying his machine makes her feel immensely proud.