Having constructed over 1,500 toilets across 7 villages, this man is on a mission to end open defecation in rural Bihar 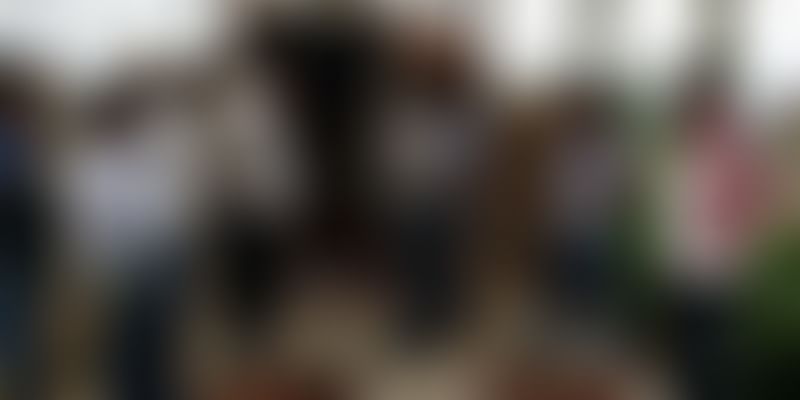 Working for the regeneration of villages, the Centre for Rural Information and Action (CRIA), an organisation led by Dr Shyam Anand Jha, is raising funds to build toilets for the poorest of the poor.

The women and children of Brahmpura village in Darbhanga, one of the most backward districts of Bihar, no longer have to step out to defecate in the open, thanks to a successful, replicable model formulated by Anand Jha and his team that has helped build over 1,500 toilets in seven villages across the district.

Born into a lower-middle-class family of the same village, Anand (48) had poverty sear its mark very early in his life. Although there was agricultural support to his father’s meagre monthly salary as a peon, the family did not have enough to build a toilet. Sharing vivid memories of women from the family waking up early in the morning and late in the night, heading for the fields to defecate, he says,

“Luckily for us, later on, my brother got a couple of toilets constructed in the house. But those memories still linger.”

After moving away to Delhi to secure a doctorate in philosophy, art, and literature from Jawaharlal Nehru University, Anand returned to his village 35 years later in 2015, only to be taken back in time. “Even a year after Prime Minister Narendra Modi launched the Swachh Bharat campaign, the practice of defecating in the open was prevalent in my village. It was as if nothing had changed in the years I was away.”

The nuisance of open defecation is not new to us Indians, especially in the rural areas — it has been an accepted way of life for ages despite the health hazard it poses.

India has more open defecation than any other nation in the world, with one out of two people choosing to defecate in open fields, by the railway tracks, or even on the roadside. What's worse is the outcomes — over two lakh children die from diseases caused by fecal contamination every year. That’s not all — nearly 300 million women are forced to wake up before sunrise, find a secure spot in the fields away from prowling eyes, and squat in their saris just to relieve themselves. They have no choice but to do this for fear of being attacked.

The only bright side has been national sanitation campaigns and tiny but mighty steps by conscious citizens like Anand that help keep hope for change alive while slowly bringing in much-needed social progress.

“I realised that Darbhanga and my village had fallen prey to this sad way of life. The habit of open defecation left serious implications on water and thus on health. Almost every third family was suffering from health-related issues directly linked to this menace. Ponds and wells were polluted beyond measure. The stench of excreta made breathing unbearable, more so in the mornings and late evenings,” says Anand.

After a few enquiries from the villagers, he found out that the mukhiya (head of the panchayat) and the block development officer were taking bribes and making payments against old toilets. The villagers bribed the mukhiya, took repeated pictures with existing toilets, and sent them to the government in order to receive reimbursements by making it seem as though there were new toilets being built. He also realised that half a dozen of these payments were made against the toilets that belonged to Brahmpura. “There were no new toilets constructed. The ones who desperately needed them had no money to construct them and as per the government scheme, the beneficiary is reimbursed only after he constructs the toilet. It was a vicious circle which had made the scheme completely ineffective. I was now determined to transform this situation.”

Also, deeply saddened by the plight of the rural women, Anand’s wife Nivedita came up with a solution.

“This thought troubled me for a very long time. The struggle only got worse when women were pushed to squat on the roads during monsoons when it’s flooded and slushy everywhere. Imagine having to move every time you see a beam of light approaching,” she shares.

The first step to putting an end to these conditions came when she arranged a meeting with the then-district magistrate, explaining to him that if they wanted the poor to have toilets of their own, they needed to ensure timely reimbursements, within a fortnight. “I also assured him that we would start by constructing toilets for the poor with our own money and once the initial payment was made, we would rotate funds to build toilets for the others.” Impressed with the idea, he gave them the green signal.

Taking charge of the situation, Anand and his 10-member team began by selecting a cluster of Dalits from the Brahmpura-Bhatpura panchayat, identifying families without toilets. Among these families, they made their own list of who would get toilets built on a priority basis. “We used the approval in a sustainable way, making it clear to the local authority that nobody could ask for a bribe as the DM himself wanted to see new toilets constructed. We created a small fund with help from like-minded friends and our own money and started building toilets, giving priority to the neediest.”

Named the Brahmpura model as the drive kick-started there, local suppliers of sand, cement, brick, and other materials were contacted to put the plan into action. The suppliers were made stakeholders in the entire operation, turning the model into a great success with toilets built for over 100 families in the first month of the initiative.

Unable to contain her excitement, Beena Devi from the Bhatpura ward expresses, “I had never imagined that I would have a toilet of my own, but today, because of CRIA, our entire ward has access to their own toilets.”

A blessing in disguise

Government policy required proof of an already constructed toilet to pass on the benefit, and even if a villager managed to build a toilet of his own after borrowing money or taking a loan, he would have to pay bribes at every level just to receive a reimbursement. Moreover, building a toilet with the specifics of the scheme cost more than Rs 12,000, not only becoming an expensive affair but also bringing in several hassles. The model, therefore, proved to be a solution to many problems.

“Since the model has a team of trained masons that buy materials in bulk, we were able to control the cost and the local officials do not dare ask us to pay for sanctioning funds,” says Anand.

There were other challenges too. “The mukhiya could not digest that things could be made possible this way. He did everything in his capacity to subvert our efforts. However, the movement never lost its momentum — in fact, it became a small revolution and was unstoppable. To disrupt our way of work he ordered his goons to start building toilets too, but people realised the substandard quality of the toilets constructed by him,” he adds.

Standing witness to this, Prasadi Das from Kabir wing says, “If not for Dr Jha and the organisation, all funds that came in as part Swachh Bharat would’ve made their way straight to the pockets of the mukhiya and BDO.”

A toilet for all

The Brahmpura model was created to continue as an ongoing process, adopted by all 550 villages of the Darbhanga district until every village is declared open defecation free. With its success, that was exactly what happened. Anand and team have received demands from panchayats both near and far, inviting them to replicate the model in their villages.

So far, the team has been working with seven villages, expanding to the others as well. But to reach out to more such needy families they need resources — funds and skilled labour.

“Darbhanga is a very large district and each panchayat needs to have nearly 2,000 toilets to make the district open defecation free. Government data shows that more than tens of thousands of toilets are already built. But most of this data is fudged. Our understanding is that even if we construct 3,50,000 toilets in this district, the entire district population will have access to clean and safe toilets.”

CRIA has worked out a mechanism through which this can be achieved. They have the manpower to execute their plan — all they need is funds for resources that they are trying to raise through the ‘Open Defecation Free Darbhanga’ campaign. “With help from this campaign, instead of building a toilet for each household, we plan to raise units in each panchayat that can replicate the Brahmpura Model in their respective village. We are also closely working with a Singapore-based infrastructure firm to make toilets for the masses with their expertise.”

Today, none of the villages in Darbhanga have been declared open defecation free, but the dream is very much alive.

The joy of cleaner, breathable air as a result of the toilets constructed this far is what keeps Anand and his team going.