15 ways to disruptive innovation: what you can learn from successful startups and corporate innovators 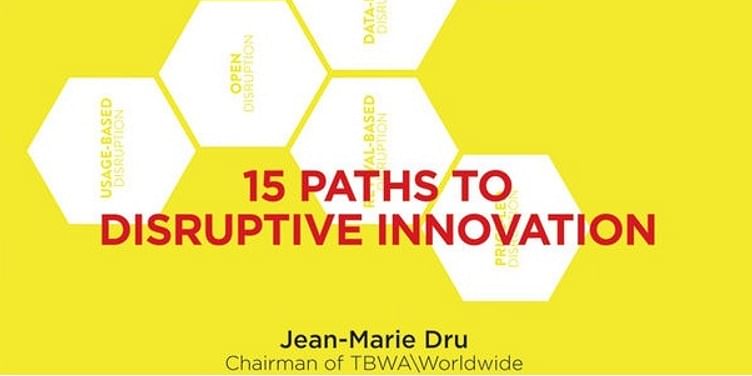 Jean-Marie Dru, Chairman of ad giant TBWA Agency Network, has put together a range of compelling innovation case studies and methodologies in the book 'The Ways to New: 15 Paths to Disruptive Innovation.' Featured firms include Alibaba, Haier, Airbnb, L'Oréal, Salesforce, and Xiaomi.

Innovation and marketing are the two key functions of businesses, according to Dru. Many patents and scientific papers have been published, but not as many have taken inventions to the market. Some kinds of innovation are competitive (against other companies), great innovation is for the world, and collaborative innovation is with partners.

“We must innovate in the way we innovate,” begins Dru. The 200-page book makes for a highly informative read, and we look forward to further updates of the material. Dru’s other books include Disruption and Beyond Disruption; he is also chairman of UNICEF France. Here are my takeaways from the 15 types of disruption explained in the book.

Open Disruption involves collaboration with customers and partners, accelerated through models like digital platforms. This includes Xiaomi (‘design as you build’ via agility in producer communities), Lego (fans as designers on the Lego Ideas crowdsourcing platform), and P&G (‘connect & develop’ via outside intellectual capital to reinforce inside creativity). Makerspaces are also new ways to establish knowledge-based co-creative capacity.

Nissan uses transfunctional and transverse teams with cross-cutting leaders. DARPA has used creative intensity and tight deadlines to come up with GPS, drones and other innovations. L’Oreal has started a Connected Beauty Incubator in San Francisco. TBWA has a network of labs focused on social media, data, UX, e-commerce and gaming. SalesForce has internal social tools, and DreamForce Conferences to address innovation.

Asset-based Disruption involves leveraging your core infrastructure. Amazon is not just a retailer but a cloud platform provider. DuPont, inventor of lycra, teflon and nylon, focuses on new products as well, especially those launched within the last five years. Apple’s design is based on the ‘art of reduction.’ French postal agency La Poste is coming up with a new range of community services.

Reverse Disruption views emerging economies not just as big markets but as sources of innovation. For example, frugal innovation calls for creativity in adversity, and inventiveness in scarcity. GE developed a portable ECG in Asia; Renault’s low-cost Logan vehicle is made in Romania. Cement manufacturer LaFarge has labs in China and India to develop new kinds of all-terrain cement.

Sustainability-driven Disruption focuses on social and environmental drivers and impact. Examples include Unilever’s Sustainable Living Plan, Toms’ ‘one for one’ shoe donation for every pair sold, Philips moving out of standard light bulbs into LEDs, Systeme U local community-based retailers, and Light Liter water bottles in the Philippines.

Data-driven Disruption taps hidden insights in data banks and streams via algorithms, used heavily by the likes of Amazon, Uber and Google. “We tap the world’s most data-rich complex system, the weather,” says Vikram Somaya, managing director of The Weather Channel, now transformed into the Weather Company.

Usage-based Disruption is based on observing unexpected usage of products and services to get new insights. Watching how farmers used washing machines, Haier came up with a machine that could clean potatoes also; new ideas are put to vote by employees as well as customers and suppliers. Burberry designed its offline store using online elements to match the needs of the digital generation.

Insight-driven Disruption is driven by unique insights that may buck mainstream trends. Gatorade focuses on athletic performance not from the outside but within. Sainsbury urges shoppers to try something new each time. P&G launched a single-rinse foam instead of two rinses, to tap Mexicans’ need to save water. L’Oreal’s ‘geo-cosmetics’ are tuned to the needs of consumers in each unique geography.

Big Bazaar uses ‘chaos on purpose’ to give its Indian stores elements of roadside markets and not sterile western supermarkets. NetFlix uses data and algorithms to determine what programs and content users want.

Business Model Disruption leaps across traditional definitions of vertical and horizontal activities. Tobacconist Nickel allows users to open bank accounts. Apple is innovating all across its model, from iTunes to retail stores, and involves communities of developers and users as well. Tesla sends its cars software updates online, and is promoting GigaFactories for solar energy.

Alibaba is the ‘ultimate ecosystem,’ according to Dru, with a range of offerings: Taobao, Tmall, Alipay. AirBnB is riding the sharing economy wave, where access is more important than ownership and the community is also part of the brand; its catchy slogan is ‘A world without strangers.’

Anticipation-driven disruption focuses on seemingly futuristic projects and products. Japan’s Mirai Nihon is an off-grid house. A range of companies are positioning themselves for the ‘smart city’ future. Google’s company Calico wants to extend the human life-span dramatically.

All these methods also call for disruptive brand building. This comes from a compelling vision based on business landscape analysis. Dru’s team has developed tools in this regard called vision composing, future edging, business hacking, insight mining and connections radar. They also organise Disruption Days for corporates and government (Finland, Thailand).

“Brands that do not see the future coming usually do not have one,” sums up Dru. “Today’s visions will be tomorrow’s conventions. We are now living in a world of fast emulators, copiers,” he cautions.