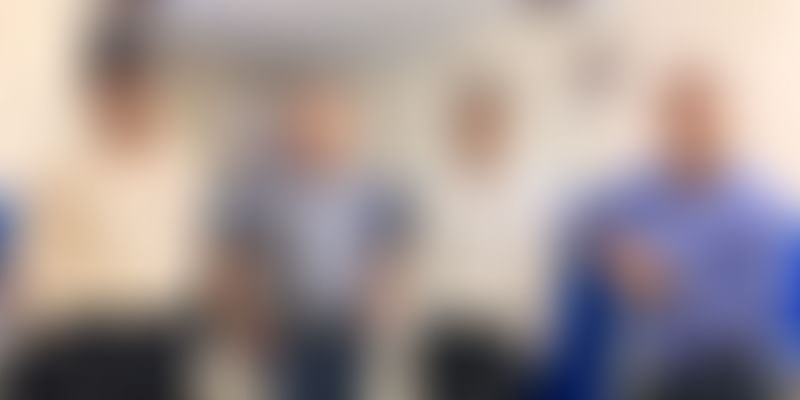 Three 42-year-olds got together last year to start up in the fintech space by supporting SMBs with loans and banks with digital strategies.

It is not often that friends who parted ways 20 years ago get together and start again. After Brahma Mahesh, Naveen Madgula and Praveen Krishnam graduated from Krishnadevaraya University in 1996, they did not meet for two decades, until they ran into each other in early 2016.

Over a cup of coffee, they shared their boredom with the corporate life and the varied experiences they had in the field of banking and technology. While Brahma and Naveen had worked for top private banks, Praveen had worked for technology companies such as Hexaware. Several ideas came up during the discussion which eventually centred on two business models. “The first was the straight forward lending platform, and the second was the advising and building of a fintech strategy for banks,” says Brahma. He adds that they decided to work on the two ideas because both were good business opportunities.

Indeed, the FinMomenta founders were right. The market opportunity for fintech businesses in India is very large. According to a report published by KPMG, fintech investments in India surged from $245 million in 2014 to over $1.5 billion in 2015. It is expected to reach $2.4 billion by 2020.

These large numbers apart, fintech is a great opportunity to invest in because it uses technology to verify customer credentials. By scoring their credit worthiness, it is able to tailor-make loans for them. All this is done by the software, and there is no physical brand lending or verifying of customers. This stands as the USP of the fintech industry. Eventually, it hopes to create a large pool of digital data that will tell people how they can consume and cross sell services, such as insurance and other banking products, to generate revenues.

In December 2016, the three founders began to build a software that could verify and score individuals. They also invested Rs 2 crore in the business and floated a peer-to-peer (P-2-P) lending platform called Tachyloans.com.

The platform connects lenders/investors who are looking for the highest interest rates, with borrowers who seek unsecured personal loans to meet their financial needs. The interest rates charged depends on the creditworthiness of the borrowers and supporting documentation, while lenders receive returns that are far better than traditional investment options (up to 25 percent).

With Tachyloans, lenders can highlight their investment preference and choose the person they wish to provide unsecured personal loans to. They can also further negotiate with borrowers and agree on fixed interest rates.

“Borrowers, on the other hand, can avail an unsecured personal loan for any purpose such as going for a vacation; funds to arrange a wedding; education and medical expenses,” says Brahma.

The company has disbursed over 230 loans so far. It charges the borrower two percent upon getting the money from the lender, and charges the lender a processing fee for every EMI paid. According to RBI Regulations, a P-2-P company can expose a borrower to only Rs 50,000 from a single lender. The company’s fintech platform has been operating only since May and hopes to close in on Rs 1 crore in revenues by the end of the financial year.

“We also have a second line of business which builds tech for banks,” says Brahma.

The team wants to create steady cash by consulting and building a fintech strategy for banks. Banks want their apps to be consumer-focussed and aim to integrate future technologies such as BHIM, UPI, Aadhar and payment and financial disbursement services. FinMomenta have signed up with a bank and 3 NBFCs to usher them in to a digital era.

The fintech era of startups

That’s why FinMomenta is betting on technology as its core driver.

“Today our tech can score an individual based on their Aadhar and bank statements. We can verify lenders too and control the recovery mechanism,” says Mahesh.

For the VCs, this is the most sought-after segment if they find people with experience in lending and technology who are getting into this industry to start a fintech company. There have been big fund raises in the industry: Capital Float has raised $38 million, and there is Lendingkart which has raised $42 million (these companies lend directly and are not into P-2-P lending).

“A large segment of India’s population that can go for digital banking and these startups disrupt normal banks,” says Ganapathy Venugopal, CEO, Axilor Ventures. He adds that scalability and business model are the only things that one has to focus on to be relevant.

While the three founders of FinMomenta strive to build a big business, only time will tell if they’ll succeed and flourish.