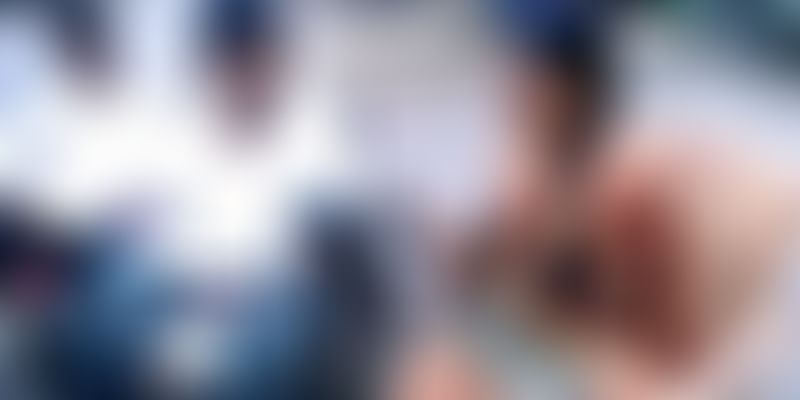 In a country where over 200 million people live below the poverty line, Haqdarshak is a social impact organisation that aims to bring awareness to the rural population about their entitled welfare schemes, and empower them in the process.

Aniket Doegar had been working with several for-profit and non-profit organisations like Teach for India, the Gyan Prakash Foundation, INDUSaction, and Grey Matters India after graduating from Sri Ram College of Commerce when he realised a major problem for the community he was working in was a basic lack of awareness of the welfare schemes to which they were entitled. It was after working with Mayank Garg and PR Ganapathy and developing a sustainable business model was Haqdarshak established in 2016. Its core idea was to use technology in order to disseminate information to the people.

For CEO and Co-founder Aniket, the goal was clear, “From day one for me the idea was to ensure information…primarily these schemes are designed and developed by the government, or even in some cases, private enterprises, for people at the bottom of the pyramid. These are the people who face the largest digital and literacy divide.” He felt it ironic that that the very people for whom the welfare schemes were designed and meant to benefit were the ones who had the fewest means to learn about the schemes. The question then became – what was the best way to empower people to become aware of their entitlements?

Working at a grassroots level

In 2016, Haqdarshak started partnering with organisations such as Tata Trust, Save the Children, as well as the Rajasthan government. By November, their team had expanded to 15 members, working primarily in Maharashtra and Rajasthan. In less than a year their team had grown rapidly, with over 1,500 Haqdarshaks working across ten States in the country. These Haqdarshaks are entrepreneurs who work at a grassroots level within the community and are trained to use the mobile platform to disseminate information. As it is a challenge for citizens of poor and rural communities to go to an established centre, Haqdarshaks go door-to-door in order to spread awareness. They charge a nominal fee, between Rs 40 and 200, for a variety of different services. What makes a difference is that the entrepreneurs generally work within their own communities and villages, making it easier to reach out to their own people and spread awareness.

With a majority of their efforts focussed on rural areas, Haqdarshak is currently working towards improving their network. They provide the mobile platform, training for their entrepreneurs, and conduct substantial research and digitisation work on both governmental and private welfare schemes (they have information on over 1,700 schemes in their database). In order to overcome the challenges of internet and network connectivity, they partner with governments, non-profits, and network organisations like Tata Trust in improve their facilities and expand their sphere of influence.

Having a meaningful impact

Building a startup from the ground level can be a difficult business, as Aniket was aware, and building the right team was essential to this process. “We’re a social impact organisation, which is a for-profit. It’s a very tricky place to be in because we’re not a non-profit. But we also don’t work as a pure for-profit, in the sense we’re not driven only by profits and revenue. For us the first and foremost vision is: how do you ensure social impact? Impact comes before revenue,” he explains. Building a strong technical, content, and research team that was aligned to this vision thus became an important component of having a meaningful impact in the community.

Within two years of its establishment, Haqdarshak is already experiencing success in the impact they have had on the citizens they have reached. At a grassroots level this impact is evident – Rizwana, a woman from rural Maharashtra was unaware of being eligible for any schemes but says that “Sheela madam (a Haqdarshak) told me about HESPL. I got to know of more than 35 schemes that I was eligible for. I opened a Sukanya account (under the Beti Bachao Beti Padhao Campaign) and now I receive the benefit under it.”

As Aniket puts it, “If you look at the impact of even one single application, it’s massive in the lives of these citizens.”

Another visible social impact is related to the empowerment of women. When Haqdarshak began, the majority of the entrepreneurs were men. However, as of today, more than 80 percent are women. Being a Haqdarshak not only allows them to work within their own communities and villages but also gain financial independence. Haqdarshak is currently working with other organisations to train thousands more women to find such livelihoods and become empowered.

While the impact Haqdarshak has had is evident, there is still a long way to go towards empowering the population that lives below the poverty line. Apart from the lack of awareness, Aniket identifies the design of the welfare schemes themselves as a major challenge. These schemes were designed in the 1950s and sixties, and although the population and their aspirations have grown, the schemes remained unchanged. He believes that at the present a lot more data is required that involves working directly with the community – which is the biggest challenge, but also a big opportunity.

Haqdarshak plans to keep growing and expanding their enterprise. They look forward to reaching out to more villages and training even more entrepreneurs. They aim to reach 1,00,000 villages in the next year or so. They hope to work with more private organisations and for-profits to increase their network and find sustainable solutions through partnerships between corporations and social impact organisations.