IOTNext: security is the first step to make IoT a success 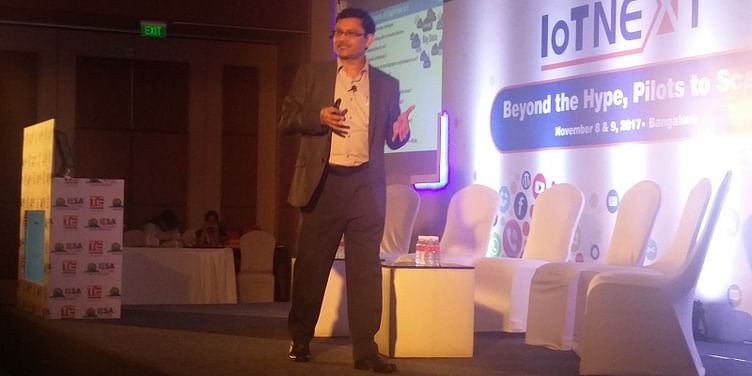 At the IoTNext event organised by the IESA and the Government of Karnataka in Bengaluru, startups are abuzz with their connected devices and their edge analytics services. The little-known healthcare company, Chikitsak Technologies, has a queue of people waiting to experience its quick health checkup service. With a couple of smart devices, the Chikitsak team checks four people in under an hour and gives them a low-down on their health. How do they do that?

Those devices quickly screen the individual’s blood and check for haemoglobin levels while there are other devices to check the heartbeat and the acuity of the eye. The data of the individual is collected and transferred to the cloud where it gets analysed on a real-time basis. In a matter of 15 minutes, the individual knows his condition and whether he needs to visit the doctor for heart diseases, stroke hypertension, or diabetes.

Founder of Chikitsak Technologies, Milind Naik says, “This is IoT for rural areas where data is transferred from medical devices on low energy blue tooth and then securely to the cloud over the network.” He adds that this data is on a blockchain and can be used only under customer’s discretion by hospitals and the government. “The impact of software, IoT devices and analytics can change the way health care is delivered in this country securely and made accountable,” he says.

No wonder the talk today at the event was about how IOT and AI will change the way India operates. Companies like a Samsung, Intel, Western Digital spoke about how securing data becomes the greatest business opportunity and responsibility in India.

The business opportunity for IoT and security

“Sense, analyse, react and recommend is what platforms are doing today. Platforms remind you of your daily activity and is meaningful if delivered securely over the cloud,” says Aloknath De, CTO, Samsung India. He adds that world today does not talk about connectivity, but about data sciences and security. “AI is making things more cognitive,” says Aloknath. He adds that with the modern devices, everything is completely on the network, from energy management to personal care to data of cars to data of users on smartphones.

“The cloud is central to new business models which will be powered by AI. There will be many services, and cloud-to-cloud integration is a big business,” says Aloknath.

Companies are making a big bet on AI-generated analytics. Bezirk, Manthan, Euler Systems, Reflektion and Score Data are making the corporates rethink how data will be used and also how to mesh a security layer around data.

“Edge analytics is important because of its ability to pull past data and make it relevan for consumers. This is what makes businesses win consumers fast,” says S M Hemanth, Co-founder, Bezirk.

Edge analytics is the ability to pull data from devices and analyse it on the go to capture consumers in retail stores.

Samsung and Apple, along with other device manufacturers, are working on secondary intelligence to bring cognitive aspects to consumer services. Apple’s Siri and Samsung’s Bixby are voice-operated AI platforms that make search and information gathering more intelligent.

Samsung is working with 200 startups in India on the cognitive revolution.

“We are preparing our devices to be cognitive and the smart fridge that we have released is a great example of a cloud within homes,” says Aloknath.

However, while this fast-faced innovation was being discussed, the other side to the story also got highlighted. Dr Gulshan Rai, Chief Information Security Officer, Government of India, raised some valid points on how data breach is becoming common in the internet world and how it is hurting nations and citizens.

“We are promoting smart cities. But, we have realised that securing smart infrastructure is of paramount importance. Today, security is a greater threat, which none of us seem to understand,” says Rai. He remarks that social media has radicalised things. “AI and cloud are big and play a much bigger role than what we have seen yet. But the government has to have standard on compliance on a security standard in place, at the moment consumer information can be hacked and misused,” he adds.

According to Gartner, modern BI and analytics continue to expand more rapidly than the overall market, which is offsetting declines in traditional BI spending. The modern BI and analytics platform emerged in the last few years to meet new organisational requirements for accessibility, agility and deeper analytical insight, shifting the market from IT-led, system-of-record reporting to business-led, agile analytics, including self-service.

Worldwide spending on information security products and services will reach $86.4 billion in 2017, an increase of seven percent over 2016, with the spending expected to increase to $93 billion in 2018, as per Gartner’s latest forecast.

"Rising awareness among CEOs and boards of directors about the business impact of security incidents and an evolving regulatory landscape have led to continued spending on security products and services," said Sid Deshpande, Principal Research Analyst at Gartner.

While the opportunity exists, security is way behind hackers. “The IoT world is a world of hacks and the emperor is naked. We must call it as it is,” says Arvind Tiwary, Founder, SangEnnovate. He says we need a framework to prove that IoT security works and we need to reimagine the internet.

Future debates will always be about how to secure busines and consumers. However, data theft is real and we need to take it seriously. Following are the key highlights of IoT: