[App Fridays] How ListUp aims to do what eBay India couldn't 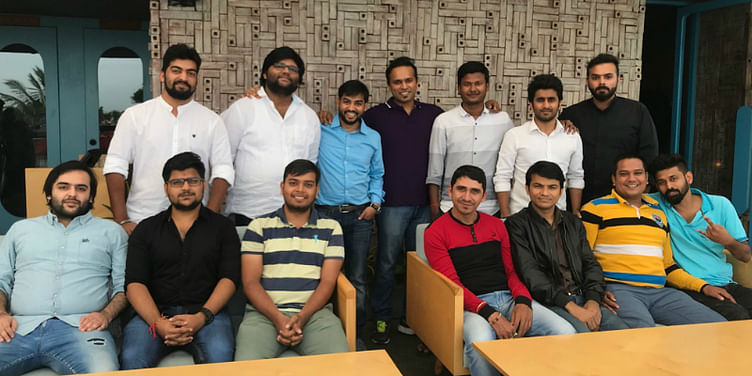 One pivot later, Bengaluru-based ListUp aims to cash in on India's 'reverse commerce' market by ensuring trust, price transparency, and no back-and-forth negotiations.

Being a paranoid millennial who can't handle even a few hours away from the internet, I was looking to buy a backup smartphone. After searching the vast corners of the internet, I found an interesting deal on an 'almost new' Moto G.

I could either buy it outright for Rs 6,100 or I could 'play a game' and bid Rs 5,083 for just the phone and hope no one outbid me. I was exploring this product on ListUp, a Bengaluru-based reverse commerce startup. Here is their story.

Launched in January 2016 by Sumit Gupta, Pulkit Gupta, and Saurabh Jain, ListUp started out with the aim of disrupting age-old classifieds in India. One year prior, working in Japan, Sumit had faced a lot of difficulty in furnishing the one-room apartment allotted to him. In an earlier interview with YourStory, he said he had tried classifieds websites like Craigslist and GaijinPot, Facebook groups, and even visited secondhand shops, but was unsuccessful in getting the products he was looking for.

He then learnt about Japan's mature recommerce ecosystem and Mercari (Japan's first unicorn startup). Inspired, he decided to return to India to try and start up in this space. ListUp started out as a peer-to-peer (P2P) social buying and selling community for secondhand goods. With verified user profiles, ListUp allowed users to bargain with sellers through an inbuilt feature and ensured that all conversations took place over chat without spilling over to emails or other channels.

However, the ListUp team realised that without a trust and price discovery layer, the C2C classifieds platform in India would not solve the buying-selling problem in the long run. Hence, they started experimenting with an approach to solve the problem more holistically and launched auctions as a mechanism to discover the fair price of used electronics. This route would also eliminate the time-consuming chat-based negotiations.

Recommerce is 4x more complex than e-commerce as the company will need to solve problems like verification with condition assessment, product quality, logistics, and warranty support. However, the team believes that they have found the right solutions to this and established partnerships to solve this tough problem.

In its new avatar, ListUp has set up a verification process to certify all products with detailed condition information upfront with high-quality photos and ratings to ensure transparency and trustworthiness.

Currently, ListUp operates in the electronics category across mobiles, laptops, Kindles, tablets, and gaming consoles. A user can buy certified used or refurbished electronic goods at 50–70 percent discount from ListUp through two means:

In the bidding category, consumers can choose their price by placing a bid amount based on their budget and assessment of the product. According to Sumit, ListUp CEO, all listed products undergo stringent quality-control checks and are given a 'ListUp score' which shows how used product condition fairs against new product under different parameters.

Sumit also noted that ListUp runs periodic flash auctions for used electronics, starting at Rs 999, which is gaining momentum among its user base. ListUp also provides post-sales support via paid warranty and free two-day returns if one doesn't like the product.

Consumers can also sell their used electronics on ListUp through the website or app at a price quoted by ListUp's pricing engine. ListUp also gives sellers the option of putting their electronic goods on sale by:

Auction duration typically varies from one to three days depending on the urgency to sell and the seller's price expectations. ListUp has recently also opened its marketplace for businesses to sell their products, which the startup claims is also growing pretty well.

ListUp collects 10–15 percent of the proceeds for products that are sold by individual sellers on its platform. ListUp also purchases certain categories of products in bulk from third parties, puts them through necessary QC checks, and then lists them on ListUp under the brand's own name.

While the auction route has worked globally for players like Mercari and eBay, there are no real leaders in the Indian market at the moment. Earlier this year, eBay invested in Flipkart and sold eBay India to it. Apkabid and Bidderboy seem to be two players experimenting in the auction space in India.

As ListUp is headquartered in Bengaluru, the company requires consumers selling their products to be from the city to ensure quick quality checks. However, buyers can be anywhere and ListUp ships products across India. Sumit noted that they have found enough consumers and suppliers in Bengaluru to reach sustainable volumes at this stage.

ListUp soon plans to expand to other cities and the appliances category and is also eyeing televisions, which it believes will be the next big category.

Talking to YourStory, Sumit shared that ListUp is currently witnessing 70 percent MoM growth and has positive unit economics with good margins. The startup, which claims to have cracked the consumer sell side of the used electronics category, says it will also open C2B channels in other categories over the next 4–6 months. Talking about their long-term vision, Sumit shared,

ListUp's ultimate vision is to make a cross-category recommerce marketplace for both consumers and businesses for buying and selling, where overall experience is as seamless as Flipkart or Amazon, thus, making a difference by making people's lives affordable.