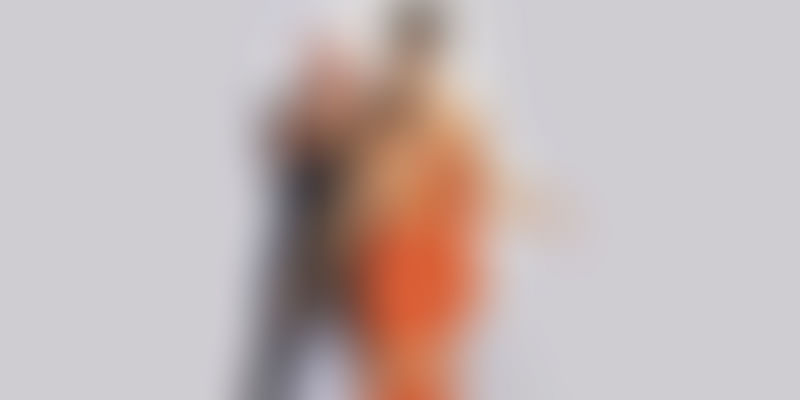 This isn’t a typical — found one’s calling, took the leap, and things fell into place miraculously — tale. Read his inspiring #PassionToPaycheck story below.

The problem with millennials is that they want everything fast, whether it is food or success. And when success doesn’t follow few months after starting up, their world falls apart. Stories like that of Ralph Daniels prove that only years of dedication and hard work can attract success.

Changing careers in India is not easy, especially with ‘Anu aunties’ keeping an eye out for kids who wander from the conventional path. And when the shift is from a nine-to-five job towards becoming a makeup artist, it definitely provokes suspicion.

Ralph moved to Bengaluru from Pune nine years ago to take up a job in a BPO. Today, he is one of Bengaluru’s most sought after makeup artists. What happened in between is a series of unlikely events. The journey from desk to runway has been a bumpy yet steady ride.

Ralph worked as a voice and speech trainer with MNCs like Accenture and IBM in Bengaluru in the early 2000s, when the BPO boom happened. “I really enjoyed my corporate job. But somewhere deep inside, I’ve always had a creative streak. Since childhood, I was involved in painting, accessory making and crafts as part of extra-curricular activities. Coming from a family which gives importance to studies, fashion and makeup do not count at all. It is treated as the career of a woman who starts her own parlour after getting married,” says Ralph.

Hanging out with a friend from NIFT, who worked with several fashion designers, gave Ralph a peek into the fashion world. Like most outsiders, Ralph too thought the fashion industry to be a ‘party and drug-fuelled, crazy, narcissistic place’. However, a three-day stint of helping backstage at a Fashion Week broke all preconceived notions he had about the industry. This experience helped him know he was ready to take the plunge.

Also read: From tech cog to dance choreographer, Preetham Singh has shimmied his way to success

Three days for a career switch?

In those three days, Ralph saw the glam world from up close and realised that it was as much hard work and as much chaos as in an MNC. Being surrounded by the best in India’s fashion scene, he got to observe how they work, how the styling happens, how quickly the models have to change. “There was order in the chaos,” says Ralph. He came to believe that in the fashion industry, there’s no need for a godfather — if one has the talent, they can make it. Encouraged by friends who had faith in his creativity, he decided to go ahead.

“I had a plan. I saved up six months of my salary, quit my job, and then slowly began my journey as a makeup artist.” With no professional training, Ralph is a self-taught makeup artist. The initial days were tough — he did not get work easily, and being a shy person, Ralph wasn’t good at marketing himself. He landed his first few assignments through friends who worked for magazine photoshoots. While the shoots paid less, it gave him field experience.

Ralph had a negative experience with a top-notch artist who turned down Ralph’s request to assist him. It was then that he decided never to ask anyone again for training and to learn the skills himself. He began looking for schools that offered makeup courses. However, this was way back in 2008 when the schools were teaching the gaudy makeup style trending in the 90s. Ralph, whose exposure to fashion was through international runways on FashionTV, found the garish make up style taught at the schools distasteful. So, he taught himself the art, made mistakes, and while the learning curve was long, he mastered the skill.

From passion to paycheck

From the start, Ralph was very particular about his work: “My style was minimalistic. I hated heavy-duty kajal and lots of blush.” He got noticed by photographers and who roped him in for shoots, and within three years, a lot of work started pouring in.

“I did not have to struggle a lot because I was clear about who I wanted to work with, and the kind of work I wanted to do,” says Ralph.

He reveals the secret to making it in the industry. With so many artists in the field, it is vital to have one’s signature style that helps one stand out, said Ralph. He mentions his own style to be Vintage Hollywood. Recently, he went to London to take a Vintage Hollywood hair styling course. Apart from fashion and magazine shoots, Ralph also does bridal makeup.

Quiz Ralph about makeup in the Bollywood films these days and he is quick to pick his favourites. He liked Alia Bhatt’s makeup in Udta Punjab. “It was done so well; they even put dirt in her fingernails to complete the look,” says Ralph. He hated the makeup and look of the actors in Baahubali — he feels the magnum opus lacked sophistication in its makeup and styling.

Having travelled across the globe for work, Ralph has keenly observed the openness with which industry specialists exchange knowledge. There are makeup trade fairs in the UK and the US where knowledge sharing and workshops take place. This encourages newcomers and helps them learn the tricks of the trade.

In India, however, he finds it be very different. Established artists maintain secrecy about the products they use and their techniques. Ralph attempts to change this by encouraging beginners to assist him with shoots or intern with him, so that they get to learn on the job.

In the future, he plans to conduct workshops and training sessions for novice makeup artists.