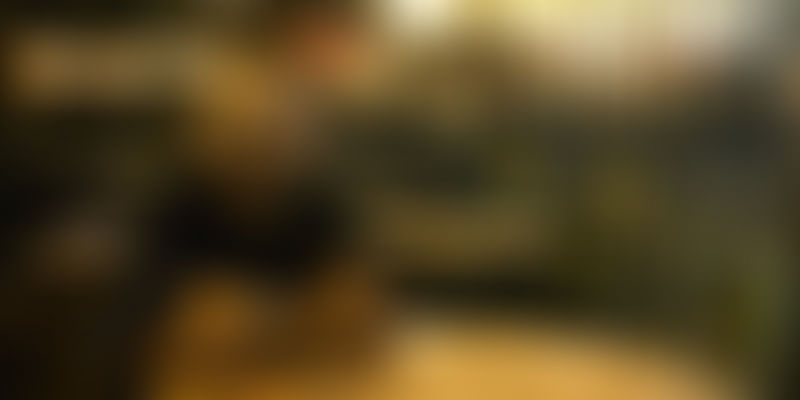 Sharad Sharan may have been making bestselling cinema and television in the Far East for over two decades, but the restlessly inventive entrepreneur always kept one foot in the door when it came to India.

When Startup India, Stand Up India gained steam, he returned with a meticulous collection of entertainment ideas from his exploits around the world. He’s rolling them all into one, the All Rounder arena, and is 10 days away from launching India’s first neon futsal setup.

A backgrounder on the “all-rounder”

Belonging to a family of civil engineers, Sharad was an anomaly from the beginning as he pursued a course in history at DU’s Hansraj College. He went on to work with Shekhar Kapur as an assistant and was one of Zee Television’s first four employees in 1992. However, he left India in July 1995 to work in Jakarta, at a company called Multi Vision Plus, as a director. He went on to create 38 titles of television series spanning 1,500 hours, and even produced Indonesian films. He moved to Malaysia in 2005 and remained there until May 2017.

“We made around 10 films in Malaysia and won 21 awards in total as director and producer, in the international and the national arena,” he says.

However, the man yearned for change and his life, neatly divided into 10-year stints in Delhi, Mumbai, Indonesia and Malaysia, is testimony to that.

“I get bored after a while, and keep re-inventing myself. That’s why I moved back to India,” Sharad says.

While in Malaysia, in 2010, he had started Dream Sports Fields, India's first specialised turf, in Mumbai’s Inorbit Mall. The - idea came to him when he saw his son having fun in astroturf during football training in Malaysia.

“I immediately thought to myself, why hasn’t this been done in India before? A year later, the idea seized me completely and picked up in ways I could not have imagined. Football was penetrating India at an astounding rate - the way IFL is doing, with the junior World Cup happening in India, is proof of that,” he says.

For his first venture, he had decided to talk to the head of the Inorbit Mall management on a whim. The management ended up agreeing to the terms in a few months. The field, first meant for coaching purposes only since the demand for five-a-side football was not too high in 2010, was then opened to the public.

“Sales skyrocketed, we decided to build more and implemented a corporate structure in the process,” Sharad explains.

Starting with a single field in Mumbai, they now operate 16 of them and are still counting.

To replicate this model and open more branches, he met with the Phoenix Mall management, but they were looking for an even more vivid arena with a wider scope of offerings, something that resonated with Sharad. It was while thinking about how to capitalise on this momentum that the idea of starting a neon futsal arena struck.

“The more I thought, the more I mused. Why not add a bar and restaurant, a gaming arcade or even a virtual reality arena since it is all about the future! We both agreed that Phoenix Marketcity, Pune, would be the perfect venue. The vision was to make an all-in-one arena, so we decided to put our expertise of sports and added components of virtual reality gaming, food and live music into the mix. That’s why the name AllRounder Shots, because there is something for everyone,” he says.

The arena will be opened on November 17.

Setting out to create a 360-degree entertainment experience, Sharad has created an arena that spans 30,000 sq ft, and is home to a massive sports zone, gaming arena, bar and restaurant.

AllRounder Shots is equipped with advanced virtual reality, sports and gaming technologies. Most interestingly, it houses India’s first neon futsal setup, complete with an invincible Robo-Keeper goalie. Futsal is a variant of association football played on a hard court smaller than a football pitch, and is mainly played indoors. It is most similar to five-a-side football.

Its 21 other virtual reality games include an exciting cricket setup, with nets with sensors for advanced statistics and live analysis for those seeking to fine-tune their abilities.

“Just for Rs 250, a child can know the speed of bowling as compared to a place in BKC, which is only restricted to national players, and not accessible to the common public,” Sharad says.

The bar will have a western contemporary feel. An Indonesian chef has been flown in to curate Indonesian, Malaysian and Thai food, along with an Indian master chef, who will overlook the Indian and continental menus.

“The economy is bustling in India, and the new initiatives for startups tempted me to return home. The country is flourishing with intellectual capacity and monetary support to back up progressive ideas,” he says, adding, “Nothing of this magnitude - a neon futsal arena and a box-cricket field - has been done in malls before, and I believe the people are ready.”

“We will be conducting regular tournaments, showcasing live events with famous DJs, artists and bands and plan to host grand virtual reality competitions,” he says.

While Mumbai-based Smaaash is a competitor, Sharad is confident that his offerings are more diverse.

“I am trying to make it an all-round experience, wedding food and entertainment,” he says.

Solely funded by him and his friends and family, Sharad wishes to take his venture to the Far East, to the countries he has lived in. Their association with Phoenix Mall also allows them to expand to their other outlets right away. But, for now, all eyes are on All Rounder Shots in Pune.