After opening experience centre in Hyderabad, this is what IKEA plans for India 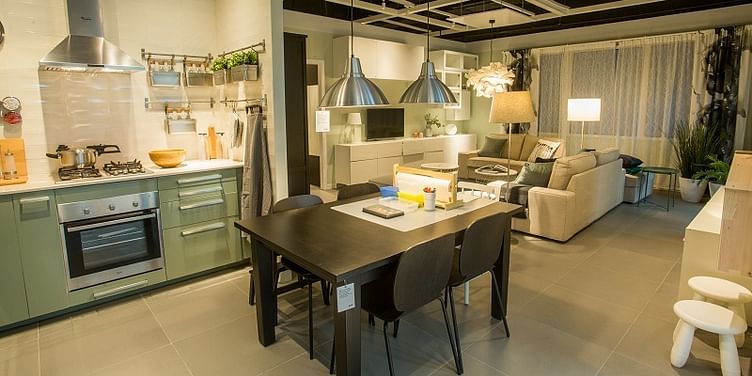 After years of speculation, Swedish furniture giant IKEA has finally made its first official step into Indian retail by offering a preview in Hyderabad. The 74-year-old company on Wednesday opened an experience centre in Forum Mall – named ‘Hej (Swedish word for Hello, pronounced Hey) HOME’ – where products are not for sale but for display.

The effort aims to give a taste of IKEA to the Indian consumer before they can actually buy at the store when it opens in Spring 2018. This outlet has hardly 10 percent of IKEA’s total collection. The outlet will have a longevity of six months, and by that time, IKEA will open its first original store.

Customers can sign up here for IKEA’s loyalty programme too. For the next six months, different workshops and interactive sessions have also been planned for visitors, including home improvement topics and cooking sessions. Visitors can also get a glimpse of the IKEA Food offer, and taste Swedish and Indian delicacies that will be sold in the IKEA store’s 1,000-seater restaurant, one of the largest in the world.

YourStory had a detailed chat with the people who call the shots at IKEA in India to find out what their strategies are for the Indian market.

Since 2012, IKEA team in India has been doing wide research – including 800 house visits in cities across the country (such as Hyderabad) – to understand the needs of Indian consumers.

At present, they have a 300-member strong team in India; but in three months there will be 900 members as they need more staff in the stores. (IKEA has 403 stores in 49 countries with a 1,94,000-member strong workforce.)

Ulf Smedberg, Country Marketing Manager, IKEA India, told YourStory, “We did a lot of research. We find that Indians are very proud of their homes, as they are of their family, food, and children. All these aspects are very close to IKEA. So, we have better and quicker starting point in India than in other markets.”

Ulf has spent four years in India – in New Delhi and now Bengaluru. He has observed how the consumer behaviour has changed over the last few years.

“I didn’t expect it, but India is extremely advanced when it comes to digital communication, and people expect to find everything on their mobiles. So, our interaction with them will also be more digital,” he says.

Like many startups in online furniture sector that have come up in the past five to six years, IKEA will also introduce VR and AR – you can take a photo of your home and see whether the IKEA sofa will fit there. Although this is their global strategy, Ulf declined to say when exactly this will happen in India.

Although IKEA is all about in-store experience, to have more touch points with its customers, it will soon be entering e-commerce (Ulf doesn’t say when). However, Patrik Antoni, Deputy Country Manager of IKEA, India, specified that it would be via ikea.in rather than any online marketplace, as that gives them better hold over their quality of service.

Role of the state

IKEA has such experience centres in Japan, China, and South Korea too. It will launch Hej HOME in other cities where it plans to enter with larger stores. After Hyderabad in the spring of 2018, it will be Mumbai in 2019, followed by Bengaluru and Delhi NCR.

But why Hyderabad to begin the journey?

Patrik says that IKEA has its initial focus on five cities – Hyderabad, Mumbai, Bengaluru, New Delhi, and Chennai. He elaborates,

“We wanted to learn more about the states of India, and have had discussions with state governments. Telangana government was the most cooperative. It was supportive in the whole process – by explaining the rules of the state, helping us find land, and in ensuring that we get a good head start.”

He adds that GST has made sourcing and transportation much easier. “This helps make the range more affordable so that customers get value for money,” says Patrik.

Localisation is the key

Understanding the local market is crucial for success. Patrik says that home visits have helped them find out more about the consumers’ needs, dreams, and aspirations. “We have learnt how they live their everyday life. We understand their needs and then we take the range of our 10,000 and more products and put it together in a way that suits the local market,” he says.

People live differently in India. For instance, laundry is mostly done on the balcony so washing machine is also kept there. In Sweden, it is in the bathroom while in Portugal it is in the kitchen, and in the hallway in Russia. According to Patrik, it is not tailor-made products that are needed but tailor-made solutions.

“We don’t have any particular target audience in terms of age or income. We are approaching the market on a need basis. The trick is to make everybody feel welcome,” he says. For marketing too, IKEA will move with local language in print and TV, in addition to online route.

Following Flipkart and Ola, US-based giants Amazon and Uber respectively have also built strong market share in India, playing an important role in changing the consumer behaviour in the last five years. After Uber and Amazon, how will IKEA influence the Indian consumer?

Ulf says, “We will make them more interested in their homes. Our home visits have found that people are looking for small things that make their life easier – in terms of storage, kids’ space, etc. That’s the kind of solutions we hope to provide.”

Indian consumer behaviour has transformed completely over the last ten years. But the Indian consumer is not used to IKEA’s famous do-it-yourself (DIY) model. Won’t that be a hurdle? Ulf doesn’t think so.

“Our research says that people are interested to find out more about this model, specially NRIs returning to India who have exposure to the model and urban youth who want to try new things. We anyway provide that service for a small fee if they choose so. But DIY is more fun,” he says.

More importantly, even if you have a thin wallet, IKEA wants to have something for you. “We want to be inclusive. Majority of Hyderabad is families with kids. But we serve single youngsters too – even if you are not rich, and want good-looking, useful furnishing for your home. We want you to come and experience our store, let children play in the play area, and make it a day out for the whole family,” Ulf elaborates.

IKEA has been sourcing from India for more than three decades now. Patrick added that they are constantly trying to expand the suppliers’ network in India. They already have 45,000 people involved in production in India and 40,000 in the supply chain. By 2025, IKEA plans to open 20 stores in India. (IKEA has already bought land in Gurugram and is planning to buy land in more cities.)

In the large stores, IKEA will have different room models – colourful, minimalist, classic, etc. – unlike the experience centre which has only one. Also, Ulf believes that AR/VR and omnichannel strategies are the future. With multiple startups also working with the same tools, he says that it will help the industry grow. “We are all competing for the wallet share, against the offline home furnishing world too. We want the consumer to spend more on their homes, rather than on phone or car,” he adds.