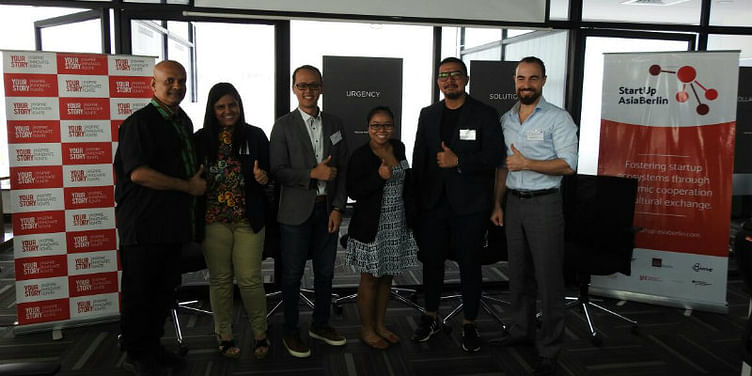 From Berlin to Manila via Jakarta and Bengaluru – sounds like the perfect plan for a holiday? Only, these cities are home to the biggest revolution since maybe the industrial revolution – the startup revolution.

These four cities have been instrumental in nurturing and promoting entrepreneurship, giving wings to many a dream of making it big in the world. The ecosystems in these cities are at various stages of development and give a leg up to an inclusive environment for entrepreneurship. Whether it is the government support or big corporate houses driving the change, the startup scene is evolving rapidly.

The second edition of StartUp AsiaBerlin Roadshow (SUAB) took place from October 18 - 29, 2017. With an aim to foster startup ecosystems through economic cooperation and cultural exchange, the platform was established by the city of Berlin in cooperation with the Deutsche Gesellschaft für Internationale Zusammenarbeit (GIZ) GmbH, and is supported by German Federal Ministry for Economic Cooperation and Development.

SUAB is facilitated by the Indo-German Chamber of Commerce, Bangalore in India offers the opportunity to develop innovative solutions for relevant global challenges. It aims at increasing the quality of startups in the three partner cities and is a neutral player for connecting and supplying information to interested stakeholders.

As a part of the roadshow, 26 delegates from all partner hubs visited the YourStory office in Bengaluru. The delegates had earlier also visited Manila and Jakarta to connect with each other and with players from the local startup ecosystems.

A panel discussion was organised with the entrepreneurs and experts, to get an insight into the local markets and industries. Jefferson J Hofer of HDC Agri, Jan Lachenmayer of Enpact, Aria Widyanto of Amartha, Neha Jain of Z Nation Labs and Louise Kaye G Mendoza, Department of Trade and Industry - Export Marketing Bureau, Philippines were the panelists at the discussion. The session was moderated by Madan Mohan Rao, from YourStory.

Here are excerpts from the session.

While discussing the startup trends from around the world, the biggest trends that came out were in the areas of Artificial Intelligence (AI), Augmented Reality, Virtual Reality, and Machine Learning (ML).

Neha of Z Nation Labs, an early stage accelerator, said, “Besides growth in the areas of AI and ML, acceptance of open innovation has been on an all-time high. More and more MNC’s like Google, Amazon, Intel are open to open source innovation.” She also highlighted the impact of Bitcoin and IOT in the startup ecosystems around the world.

The innovation in these countries is expected to further accelerate with a number of public-private initiatives laid down.

In the Philippine Roadmap for Digital Start-ups in 2015, the Philippines targets to have 500 startups with a total valuation of US$2 billion by 2020. Currently, there are over 150 start-ups in the country, which shows that the ecosystem is evolving.

Jefferson J Hofer of HDC Agri, an agri-fintech company, admitted that there has been a considerable growth in Agri-fin tech and supply chains startups in Philipines.

Louise Kaye G Mendoza, Department of Trade and Industry - Export Marketing Bureau said, “90 percent of the businesses in the Philippines are from SMEs and e-commerce can play a major role in it.” She added that many startups are already helping in bringing out innovative solutions to ensure the product reaches more people.

Additionally, through the Startup Ecosystem Development Plan under Slingshot Philippines, the Department of Trade and Industry (DTI) aims to address key gaps in capacity building, funding and policy support for startups.

Jan Lachenmayer of Enpact, a management consultant and research lead, highlighted the areas in which startups can improve or work on. He said, “In Berlin and other countries, access to finance in terms of business angel networks, bridging the gaps in the finance domain can prove to be fruitful.”

When asked about the secrets to their success, the panel revealed the following- to be focused, finding a competitive edge, working on goodwill, alignment of goals with stakeholders, and partnerships with corporates, governments and accelerators. As ease of doing business remains to be one of the bigger challenges faced by any country, most panelists agreed that the situation is getting better. The trick, Jefferson stated is, foreign-local partnerships for an individual setting up businesses outside of his own country.

Jan mentioned that while setting up a business in Germany is easier than closing one, individuals need to be clear with their ideas and execution.

The panel discussion was followed by an open house with Mr. Gaurav Gupta, the Secretary, ITBT Ministry, Government of Karnataka. The discussion revolved around the startup scene in Germany and Asian countries and the synergies shared within the countries. He focused on the many government initiatives in Karnataka to foster the startup ecosystem in the state.

Of the 4200 startups in India, 28 percent of them are based in Bengaluru, capital of Karnataka. In June 2016, more than 1700 startups were registered in Bengaluru. The city had the most startup funding in India in 2014.

Bengaluru was a tech capital long before the advent of the internet and web-based companies. The first Indian Institute of Science was set up here in 1915 and has since made significant contributions within the spheres of advanced computing, space, and nuclear technologies.

Gaurav Gupta said, “The government is aware that entrepreneurship is not taught in schools, Perhaps some ideas are germinating now. I would like to encourage more and more children to learn abou the balance sheet, marketing, market research besides maths, science and language. These initiatives are necessary to be taken up, even if in an ad hoc manner and later be a full-fledged course of study.”

Some of the recent initiatives taken by Government of Karnataka to encourage entrepreneurship include the Elevate 100 programme, setting up centres of excellence for IOT and Data sciences and AI, Indian Knowledge parks, partnerships with accelerators, academic institutions, and many more.

The centre for robotics, machine learning, aerospace, defence, animation and visual effects are in the pipeline.