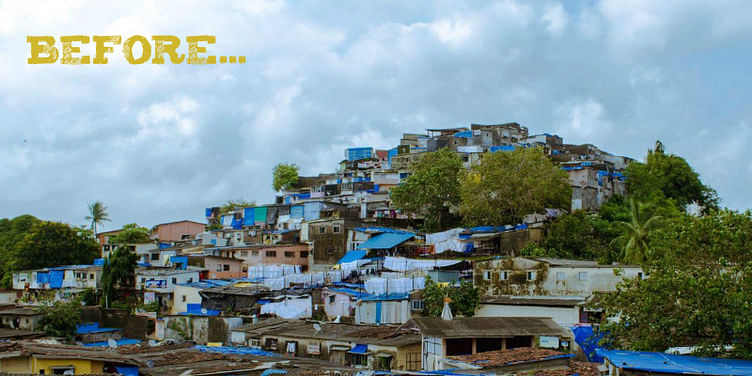 The Chal Rang De Movement started by Dedeepya Reddy aims to add colour to Mumbai’s landscape, one slum at a time.

Mumbai’s only functional metro line, from Andheri to Ghatkopar, feels like a time capsule - as you traverse the old vibrant bazaars of Andheri West, to the swiftly evolving business district of Andheri East with its glass-panelled towers, followed by the crisscrossing flyovers that lead to Maximum City’s pride, the famed Terminal 2.

But moments after - an unlikely sight jerks you out of this reverie. The slums preceding Jagruti Nagar, in many shades of dreary greys, with paint peeling off the moss-covered walls, remind you that much work still needs to be done.

But Dedeepya Reddy reads that sentence in the active voice. When the slums loomed large over the busy Andheri-Kurla road on her usual metro route, she thought - “We need to put in a lot of work. And that’s a blank canvas.”- and pictured an attractive installation of colours there instead.

One month of planning and a weekend of putting into action the ambitious plan later, the slum has gone from being an eyesore to a work of art. Here’s how she pulled it off.

Dedeepya Reddy - who holds a Masters degree in e-commerce, a creative thinking degree from Harvard, and has co-founded the digital media agency Fruitbowl Digital - had always been socially inclined. She would sponsor education for kids and even offered support to Syrian refugees in any way she could through trusted websites, but somehow, never felt it was enough.

“The constant yearning to do something where I could be more involved and in the middle of the action was always there,” she says.

With a background in design, and in the absolute mundane experience of commuting across Mumbai on the metro, she saw the opportunity to put her skill to use when she saw the slums between Asalpha and Jagruti Nagar. “This slum was in itself a beautiful landscape. Sitting there on a hilltop, it was raw but it had a beat of its own. We just wanted to show Mumbai that the happiness and the spirit of the city existed here as well. Colours make me very happy. So, my calling was to colour every slum and give it a fresh lease of life,” she says.

All it took was one little thought, to spark off a movement - the Chal Rang De Movement. She simultaneously started speaking to people and received the right guidance - like involving the police, the BMC, and learnt that she may have to procure permission to even enter the area. The bureaucracy seemed unnecessary at the time, so, one fine day, she just gathered her friends, climbed the hill and knocked on their doors. “They weren’t very used to people coming and doing nice things for them. But once we showed them renders of how it would look, they were extremely supportive. We then got permissions from the society and Mumbai Police and we were good to go,” she recalls.

From ambition to action

Knowing the kind of impact a project like this would have on society, they decided to rope in corporate entities and accessed its own pool of clients to find potential partners. “We instantly had a yes from Snowcem Paints and Mumbai Metro. We already have partners ready to fund our projects, so the future looks happy and bright,” she says.

Harnessing the power of social media to generate buzz around a product or service is what Dedeepya did for a living. So, she mapped out an elaborate plan to garner volunteers to reach out to new media sites, host an event, and build a website. "We were flooded with inquiries and event responses. Within four days, we received around 1,500 responses on Facebook and over 2,000 inquiries on our website. We could only call 400 volunteers because of the limited space and the equipment constraints,” she says.

When it came down to chalking out the actual flow of the event, they realised that a lot of minute details needed to be catered to. For example, the place could not be found on Google Maps. And despite all the planning, on the day of the event - December 2 – there was total commotion. “We had marked all the lanes in the most systematic way we knew of like A1, B1, C1. But only when we started working we realised, that means nothing. We had to go local. Our helping squad at Asalpha knew the houses by the names of the owners. They could guide me better if I said, “Kamble cha ghar” (Kamble’s house) than if I said, ‘take these guys to D12’," she says.

They also faced resistance from a certain group for a particular set of colours. "They all wanted colours in the tones of red and orange. It took us a lot of convincing to get the colours we felt were right to create this landscape on to their walls," she shares.

But despite the challenges, they managed to find supporters loyal to the cause. "Aparna aunty, the lady whose house was next to the place we had our equipment, helped us at every step. The families also frequently offered us meals at their homes,” she says.

They concluded the project at 6 pm on December 4, and the site was transformed into an art installation, bathed in every imaginable shade of colour and joy. And since they managed to pull this off in such a short span, they already have brands willing to support them in future projects. “We want to give the entire city a much-needed makeover. But each project would tell a different story,” she reveals.

This project’s last leg was disrupted by the untimely rains that lashed the city last week. So, this week, the artists they had roped in have promised to paint some scintillating wall art.

It has been a month since Project Chal Range De began, and Dedeepdya has functioned on just three hours of sleep every day and has given up on her social life completely. The effort, she says, has been well worth it. “I am not here to glorify slums like the internet trolls put it. I want the people living there to share the vibe of the city. Mumbai is a city of art, culture, and heritage,” she concludes.