A forest of their own: the story and struggle behind creating India’s only private wildlife sanctuary 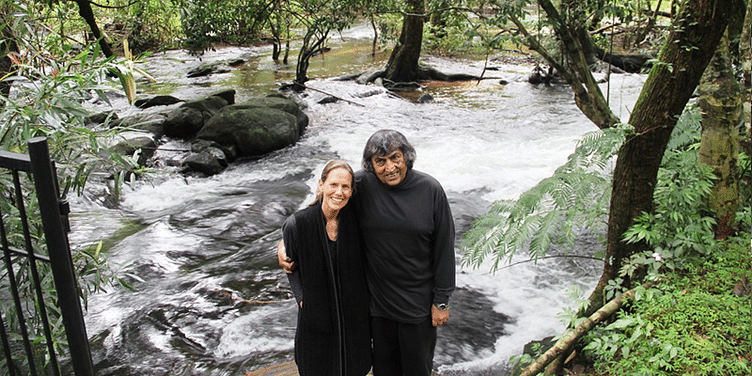 After trying and searching the world over for years to follow their dream, Pamela and Anil Malhotra finally chose Kodagu to settle down and gave India her first and only private sanctuary, Sai Sanctuary.

Pamela and Anil Malhotra have no children, a decision they took early on in their married life. What they wanted instead was to have a forest of their own. The couple worked hard in their respective careers - she as a sales rep for a pharmaceutical company and he as a banker - till they could afford one of their own.

A forest of their own

Pamela grew up on the east coast of the US on a small farm that bordered the vast estate of a rich man. “Luckily, he liked children,” she says. She spent her childhood roaming his estate and befriending woodland creatures, the love for nature firmly taking root in her young heart.

She met Anil while she was home from college for holidays. He ran a successful Indian restaurant in the area where she lived in New Jersey. “He was the first to set up an Indian restaurant there and it was very popular,” she says with pride.

After college, Pamela landed a job with a pharmaceutical firm which required her to move to Denver, Colorado. Living among the Rocky Mountains was a long-cherished desire.

Anil gave up his restaurant and started on a career in banking, so he could be with Pamela. Together the newlyweds embarked on a life of a shared vision of one day owning a forest. “We subsisted on my income while we saved Anil’s commissions from his bank job for the sanctuary we would have someday,” says Pamela.

Pamela’s job required her to travel frequently. While returning to Colorado after one such trip she was met with a horrifying sight. “The mountain heads had been chopped off for strip mining!” she recalls. Eventually, the hunt for uranium contaminated the local waterbodies with lead and arsenic. People began to get sick as the ecosystem became increasingly poisoned.

Pamela and Anil felt helpless about the situation but were determined to do something. Finally, they came to a decision.

Even though they were financially not ready to follow through on their dreams of nature conservation, they could not wait any longer.

Pamela gave up her job while Anil secured permission to work remotely and they moved to Hawaii. The tropical paradise was where they intended to settle down and have their sanctuary.

They bought a chunk of land in Hawaii and began their efforts at conservation. They practised organic farming on a small part of the land. This was for their own consumption and not for commercial purposes. They donated the excess produce to a local women’s shelter. They assiduously afforested the rest of the land and kept away from interfering with any wildlife activity.

Meanwhile, to supplement their finances, they undertook various real estate restoration projects in their spare time. It was a hard but richly rewarding life. That is until the Hawaiian dream came to an abrupt end.

Living in Hawaii meant importing the majority of their supplies from the mainland at 40 percent higher value. This was an expense the couple’s fledgling income could not sustain.

But a more sinister threat lurked at every corner. Rampant tourism coupled with unchecked construction was wreaking havoc on the fragile ecosystem of the island.

Destructive human activity all over the island drove the wildlife away. Pamela and Anil were keenly disappointed at how futile their conservation efforts were turning out to be. Then came the fateful phone call from India. Anil’s father was on his deathbed. They decided to temporarily halt work in Hawaii while they went to India to be with him and simultaneously contemplate their future on the island. They did not know then that it was the end of their American sojourn.

Anil’s father passed away soon after the couple’s arrival in India. Pamela and Anil visited Haridwar to scatter his ashes in the Ganga. They were entranced by the beauty of the Himalayas and resolved to have their sanctuary in Uttarakhand. They bought acreage in Uttarkashi to give their vision a new lease of life in India. But that plan too soon ran into trouble.

The Land Ceiling Act prohibits individuals from owning more than 12 acres of land in north India. This proved to be too restrictive for their sanctuary dreams. Moreover, they saw a repeat pattern of the events in Hawaii. Mass tourism and illegal construction all around ensured that animals would never seek sanctuary on their land. The couple was heartbroken and gave up on the Himalayas. But eventually, they uprooted themselves yet again.

Sai Sanctuary (Save the Animals Initiative)

This time the couple travelled down south in search of a location for the sanctuary. The rainforests of the Western Ghats were an obvious attraction and they soon struck gold. They discovered vast coffee and cardamom plantations in Kodagu that had been rendered barren because of decades of destructive agricultural practices. Many such farms were mortgaged to the hilt, their owners deep in debt. Pamela and Anil acquired about 55 acres of barren land to give their dreams a go for the third time. Sai Sanctuary was born.

Over the years neighbouring farmers began selling their lands off to the Malhotras because they found agriculture to be an increasingly financially burdensome profession. Today Sai Sanctuary stands at a majestic 300 acres, providing sanctuary to bio-diverse species ranging from birds and bees to Bengal tigers and Asian elephants.

“We're not only seeing more of the species we had in the past, but even additional ones, some of which are quite endangered like the Nilgiri marten and, of course, the Asian elephant. Over the past few years the Asian elephants have come to the Sanctuary and given birth four times - two boys and two girls. We have grass eaters like Sambar and Chital. We have also seen leopard cats. They come here because they feel safe. There is plenty of water. They can bring infants here without fear of human interference,” says Pamela.

The earth is currently witnessing its sixth mass extinction. Unlike the past five extinctions which were the result of natural causes, this one is driven by human activity. The Western Ghats are one of the most bio-diverse places on earth with more varieties of species here than anywhere else on the planet. Kodagu went from having 86 percent forest cover in the 1970s to only 16 percent today. Human activity, be it destructive farming practices or deforestation for construction and development, has already contributed to the extinction and endangerment of a number of critical species in the area.

For example, the Indian jackal is being wiped out by the indirect actions of ginger farmers. The ginger farmers dip the roots in poison before planting so as to kill the wild boars who come to eat the crop. The jackal, which was the key predator keeping the wild boar population in check in Kodagu, died from feasting on prey which had eaten the poisoned ginger. Now the wild boar population has exploded and this contributes to further human-animal conflict while the Indian jackal, which kept their interference in check, is virtually extinct in the region.

Pamela says, “We use our sanctuary as a living laboratory. It becomes a way for people to see how Mother Nature, if given half a chance, will regenerate herself.”

It is indeed unbelievable to see abandoned coffee and cardamom plantations transformed into the lush rainforest it is today. “First came the grasses. They came in thick. Then smaller shrubs. With them, the insects returned. Then with the trees came the monkeys and elephants. It took a lot of care, energy, time, and effort to bring them back. People thought we were crazy but that’s okay. A lot of people had thought that those who had done some amazing things are crazy,” she says.

The rainforests of the Western Ghats are critical for rainfall in the South Indian peninsula. Stripping the region’s green cover has already had an alarming impact leading to acute water shortage. “I am sure everyone remembers the court fights between Karnataka and Tamil Nadu over the use of the Kaveri river. That's because we are not getting the rainfall we need in either location because forests have been cut down. So, if we take this seriously and protect our forests then we are ensuring our own survival by enabling rainfall,” says Pamela.

Pamela and Anil hope that people, especially the youth because they are the ones who will be most affected by climate change, be inspired by their example and work towards restoring their own corners of the world. She says, “This is our life's work and it's been the most fulfilling experience of our lives. We'd love to pass on to others what we've learnt and help inspire them. Because truly our future as a beautiful living planet is dependent on it.”

Her advice to people looking to create impact through their work is: “We are very fortunate and blessed that our dreams became a reality with Sai Sanctuary. By being one with nature we've found peace and solitude within that have set the path for our lives. Believe in your ability to make your dreams come true.”