The year that was: inspirational stories from the transgender community 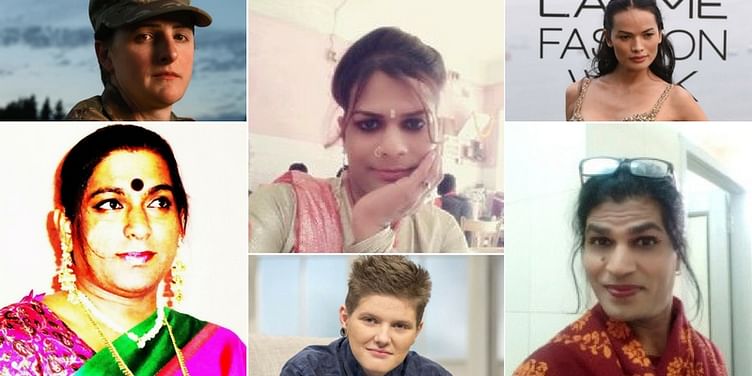 The year that went by perhaps added another chapter to the discourse of what it means to belong to the transgender community. As societies across the world still transition towards acceptance, the community is standing up for itself and becoming a part of more mainstream conversations.

Be it from the army to a judge, activism to modelling, the gender non-conforming persons of today know that their identity belongs to them alone. As the Indian transgender community demands of lawmakers to alter the Transgender Persons (Protection of Rights) Bill, 2016, we glance at the most inspirational stories of transgender persons of 2017.

Coming in the limelight due to his pregnancy, 21-year-old Hayden was the first transgender person in the UK to give birth. He gave birth to a healthy baby girl in June 2017. Originally born a girl, Hayden was on Transgender Hormone Therapy (THT) for three years to change his sex from ‘female’ to ‘male’. Last year, he decided to stop the therapy and then eventually conceived after meeting a sperm donor, whom he came across through Facebook. The baby is named Trinity Leigh while Hayden has been listed as a mother on the birth certificate.

The very first of its kind in Britain, Hayden’s life has been fraught with difficulties, including public criticism of his “poor upbringing” as a so-called reflection of his life choices. But Hayden, who is now focused on resuming his identity as a man, does not really care about the chaotic debate caused in England due to his choices. Indeed, he’s an impressive story of never giving up for what you desire the most.

Famously known as a Nepali transgender model, Anjali walked the ramp for 20 shows at Mumbai’s Fashion Week in January 2017. Anjali was originally born as a boy. But now at the age of 32, she is able to finally assert herself and fight for her identity and existence with pride after years of a tortured life. Her contact with Nepal’s LGBT community ‘Blue Diamond Society’ helped her understand her own transformation. With time, her modelling career grew, but in spite of it, she was often rejected by casting agents. Now, however, as society slowly gets more empowered and accepting, Anjali is able to finally shine her own light.

American Army Captain Jennifer Peace was born a male, but after being enlisted in the military, she came out of the closet in 2015. Reclaiming her identity as a woman, Jennifer wanted to be respected as a soldier first. Unfortunately, President Donald Trump’s tweet against her in July 2017 caused massive uproar and chaos. President Trump believed that enlisting members of the transgender community in the military is a financial burden; fortunately though his opinion has been disregarded by the Pentagon. Captain Peace believes strong that members of the transgender community play a pivotal and critical role in the US military. And hence, their identity cannot be ruthlessly attacked and has become a strong symbol of the transgender rights movement in the US.

Born in a conservative and traditional family of West Bengal, Joyita Mondal is the first transgender judge in India. The 29-year-old became the Lok Adalat Judge of Islampur in North Dinajpur district (West Bengal). She has come a long way from collecting money during marriage ceremonies as a hijra, to now settling disputes related to tenancy and family discord. After suffering from massive discrimination and abuse, Joyita states that although her new profession offers lesser financial independence, she feels respected. The need for society to empower itself comes at a cost, she believes.

After fighting relentlessly for a separate toilet in Punjab University (PU), Dhananjay, who is a political activist pursuing a Masters in Human Rights and Duties, was finally able to claim victory in May this year. In fact, PU was the first university in India to introduce a third column for gender in its admission form. Due to Dhananjay’s continuous fight against the university, asking for progressive respect for the transgender community since 2014, PU sanctioned a budget of Rs 23 lakhs to build a separate toilet for them.

However, the fight is still not over. Now, Dhananjay plans to request for a separate hostel for members of the transgender community along with remittance in tuition fees. As a scholar, Dhananjay does feel marginalized by his peer group occasionally but feels a change in the outlook is slowly coming through, one step at a time.

Famous for creating a transgender-focused YouTube channel in April 2017, Rachana is an activist from Hyderabad who strongly believes that the reality, identity, and abuse faced by gender non-conforming persons in India should be discussed in the mainstream. Awareness is essential for today’s generation, she believes. Her YouTube channel TransVision primarily aims to educate society that transgender people are “normal”, and not victims of a mental disorder, as is often believed. She also speaks about the lack of equal opportunities for employment faced by the community and the kind of pain that they suffer in their everyday lives.

Each of these stories is a saga of struggle, sacrifice, abuse, and eventual victory. However, by becoming spokespersons for their community, these transgender heroes and heroines are pushing for awareness and conversations in society. The identity of the transgender community is still rather loosely defined, especially in India. It requires phenomenal courage to “emerge from the closet” today; however, as the tides change thanks to people like the ones mentioned here, one can hope for a better and promising future for the global transgender community.