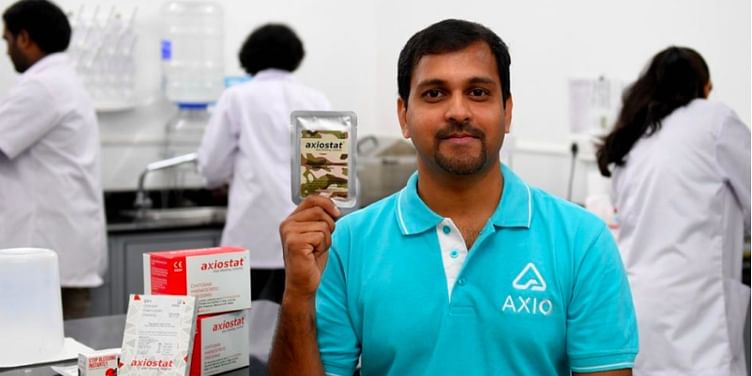 The medical devices company Axio Biosolutions, which is in the wound and emergency care segment is now looking to venture into advanced wound care, and explore the regulated markets of Europe and the US.

With this current round of funding, Axio aims to use the funds for expanding into newer markets while continuing to build and work on high-impact medical products. Currently headquartered in Boston, Axio has its corporate office in Bengaluru and a GMP-certified manufacturing facility in Gujarat.

“The current round of funding will help us expand into new regulated markets such as Europe, USA and also introduce new products in the advanced wound care segment. We will also be actively pursuing opportunities in the consumer segment,” says Leo Mavely, Founder and CEO, Axio Biosolutions.

The company was founded in 2010 by Leo when he realised that there was an urgent need in the market to build products in emergency care.

As part of a volunteer project, Leo would help ferry victims of road accidents to the hospital. One day, while he was ferrying a victim, Leo noticed that he had a wound on his neck that was bleeding persistently. No amount of pressure helped stop the flow. Though the victim survived, that incident made Leo realise he wanted to do something in wound care. And that is how he built Axiostat.

Working as an adhesive, Axiostat is a sterile, single-use, non-absorbable haemostatic dressing intended for the use of temporary control of bleeding wounds. It stops moderate to severe bleeding due to cuts, abrasions, lacerations, venous or arterial bleeding. The innovative first-aid dressing stops uncontrollable bleeding within just 2-3 minutes of its application.

Axio Biosolutions today provides solutions to the Indian Armed Forces, and has its use cases in cardiology and dental care, as bleeding isn't just restricted to trauma cases or road accidents.

“We had commissioned a Class10000, GMP/ISO 13485 certified state-of-the-art manufacturing facility at Pharma Tech Park, Ahmedabad last year. It has now been expanded with an annual capacity of close to 800,000 units. Axio is now amongst top five medical chitosan product companies in the world with this. We have also built a strong R&D pipeline with multiple patents in the wound healing, drug delivery, and hemostats space.”

The product is designed in such a way that once applied to the wound it sticks to it, creates a gel-like substance, which ensures the wound gets the needed pressure while the natural clotting process continues. “It dissolves with washing, once on application and after a while the adhesive can be washed off. There is no remanence of the product as it dissolves in water,” says Leo.

The company claims to be growing more than 300 percent year-on-year. The team claims to have shipped more than 350000 units and has a presence in over 12 countries.

Barath Shankar Subramanian, Principal, Accel Partners believes that the medical devices market in India is in its fairly nascent stage, especially in the startup sector. However, companies have demonstrated that it is possible to build world-class products with great IP to cater to India as well as the global market.

"We invest in disruptive and innovative companies that build products keeping the Indian consumer in mind while having global ambitions. Axio is well-poised to disrupt the wound care industry. In the last few years, we have seen the company transform into a global player and we are excited to be a part of this transformative journey," says Barath.

Axio is now focused on building the first global wound care brand from India. The aim is to make Axio's clotting technology ubiquitous in hospital, military, and consumer markets.

“We don’t want to limit ourselves to hospitals and battlefields and going forward we will be introducing solutions for every user. Axio envisages a future where contemporary knowledge of biomaterials, medicine, and engineering will be integrated into designing novel solutions to address the huge unmet need in wound care,” concludes Leo.

(Disclaimer: RNT Capital is an investor in YourStory)