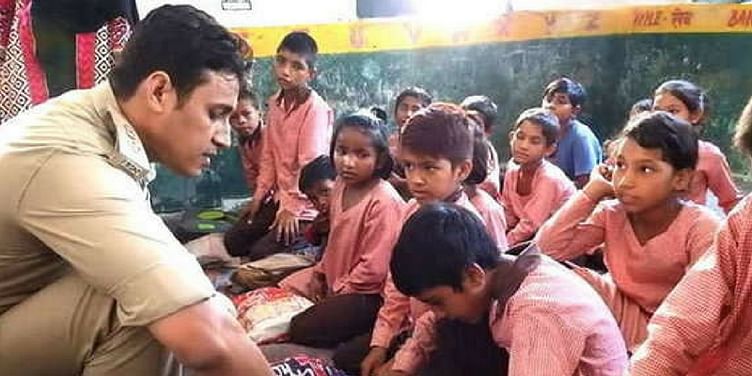 Realising the importance of educating children to carve out a bright future for the country, this IPS officer takes time off from his duty to work towards improving the state of education.

Hailing from Patna, Santosh Kumar Mishra is an IPS officer from the 2012 batch who is posted at Uttar Pradesh’s Ambedkar Nagar district. Santosh’s father, Lakshman Mishra, is a retired army officer, and mother is a homemaker. He completed his initial studies from his home state Bihar, and went on to pursue mechanical engineering from Pune University. After completing his engineering in 2004, he worked in Europe for four years following which he went to New York.

Santosh worked as a software engineer in the US for awhile, and was earning nearly Rs 50 lakh a year. However, he decided to return to India in 2011 with a desire to work for the country. He appeared for civil services examination, and was selected for IPS in his first attempt.

When he was posted in Amroha district, a student from Class V once complained about his friend not coming to school for the past 15 days. Looking at the child’s innocent face, Santosh decided to investigate into the matter and realised that his friend had started helping out with his father’s sweet business. Santosh then talked to the father, and ensured that the child starts going to school again. This inspired him to start doing his own bit to improve the state of education in India.

When Santosh was posted in Ambedkar Nagar district, he went to a primary school to teach children. These young students demanded jalebi first, and he complied. He also provided school bags to these kids, and then began teaching them maths.

Santosh considers maintaining the law and order in the country his primary duty. However, he fulfils his social duty by educating the underprivileged children.